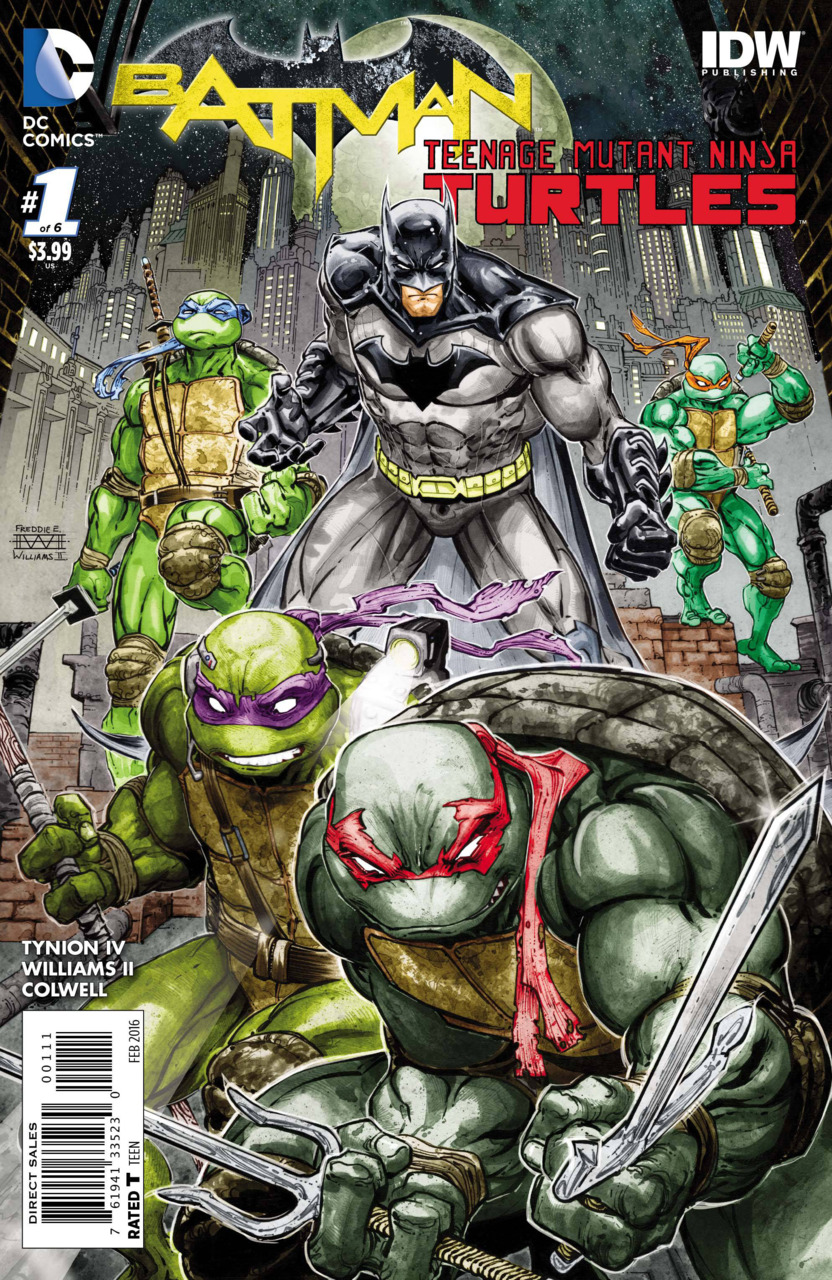 He is the Dark Knight of Gotham City. The World’s Greatest Detective. Known as the Caped Crusader. And one half of the Dynamic Duo.

They are the world’s most fearsome fighting team. They are the heroes in the half shell. And they’re green.

Together, this book unites my childhood in something that I never dreamed would be possible. Prepare yourselves for the greatest team up in history – Batman and the Teenage Mutant Ninja Turtles.

The book opens with a group of Foot Ninja attacking a Powers Corp lab; a scientist recounts the events and comments how several monsters appeared alongside the attackers wearing red, blue, purple and orange. The woman pleads to Batman to help her and stop any more attacks.

Meanwhile, a delivery boy drops off pizza on a curb as instructed by a mysterious note. As he leaves, several voices in the sewers below argue about being able to reach the box on the street above. Very quickly, a three pronged sai snags the box and drags it down.

Back in the Batcave, Batman discusses with Alfred regarding the mysterious thefts and Alfred is concerned that Bruce may be overworking himself due to the close proximity of the anniversary of his parents’ deaths. Jumping into the batmobile, Batman tells Alfred to rescind the offer of police protection around Wayne Enterprises R&D as he wants to use the location as a trap for the monsters and ninja.

We then cut to the sewers where Killer Croc is leading a group of henchmen through the tunnels. He explains that if they can find the batmobile and relieve it of some of its parts then they can sell it for millions of dollars. His plan is to use the ninja attacks to locate Batman and strip the car while he is busy fighting the bad guys. However, the group is quickly surprised when they stumble across a section of the sewers that seems to be setup like a teenager’s bedroom.

At Wayne Enterprises R&D, the ninja appears and attack the building but are quickly accosted by Batman. This scene inter-cuts with the one in the sewers where Killer Croc and his men are attacked by the Teenage Mutant Ninja Turtles who were hiding in the pipes above them. During the fight, Donatello comments how the area of Gotham City in their dimension is just an empty field…however he is quickly drawn back into battle as the four turtles engage Croc. At Wayne R&D, Batman is shown at the center of a group of unconscious ninjas as the final member is raised into the air by the Dark Knight. Naming themselves as the Foot Clan, the ninja is quickly killed by a throwing star as he talks about the mutant turtles who have been opposing them. Looking up, Batman sees the leader of the clan – the Shredder. Shredder threatens Batman to leave them alone and in exchange his city will remain safe. Disappearing in a cloud of smoke, Batman’s thoughts turn to the turtles the ninja told him about.

Back in the sewers, the turtles stand victorious over Killer Croc and his men as Splinter appears from another section of the lair. The four brothers begin arguing as Raphael comments that they need to return to their own dimension. However, the conversation is cut short when Splinter comments that their hideout is compromised and they need a new one. Arriving above ground, the turtles appear next to the parked batmobile which Donatello says is “beautiful.” The issue ends with Batman appearing on the roof above them as the turtles look up and prepare to fight.

Wow. I’m still on a nostalgic high right now as I think about two of my favorites things being mashed into a single story. Growing up in the late 80s and early 90s, I was a child of the classic Teenage Mutant Ninja Turtles cartoon, as well as Batman: the Animated Series. Forever a Turtles fan, it was only the arrival of the Dark Knight that shook the TMNT from the #1 spot for me.
This issue however is mainly a setup for events to come, and James Tynion IV does a great job at throwing a lot of information at us. Introduced to the characters of Leonardo, Donatello, Michelangelo and Raphael were done in clever TMNT fashion while showcasing each of the brother’s personalities. Not only that, but our threats from Shredder and the Foot Clan are also present in this crazy story that somehow some our heroes and villains transported to an alternate dimension. In previous Turtles stories, the brothers have journeyed to other dimensions and crossed paths with other characters such as the Ghostbusters so I’m sure something similar has happened in this situation. I also find it interesting how Donatello comments that Gotham City (in their dimension) is nothing but a barren field.

Likewise, Batman is introduced rather well to readers of the TMNT. His parent’s death is mentioned as well we see Alfred, the Batcave and mention of Robin. His prowess as a great detective and combatant is also shown when he devises his trap at Wayne R&D and takes out a cadre of Foot Clan soldiers.

The art by Freddie Williams was also pretty good, however it was a bit more cartoonish then I am used to in a Batman comic…but I feel Williams was trying to mesh the sleek style of Batman art with that of the Ninja Turtles – overall a job well done, especially using the same designs seen in the IDW Turtles series.

Overall this issue was pretty good, but I think my rating is going to be a little higher purely for my love of the characters in the story. Truthfully this issue was pure setup for things to come and a lot didn’t happen…however we are sure to open with a bang as Batman and the Turtles engage in a fight that is should to be awesome.