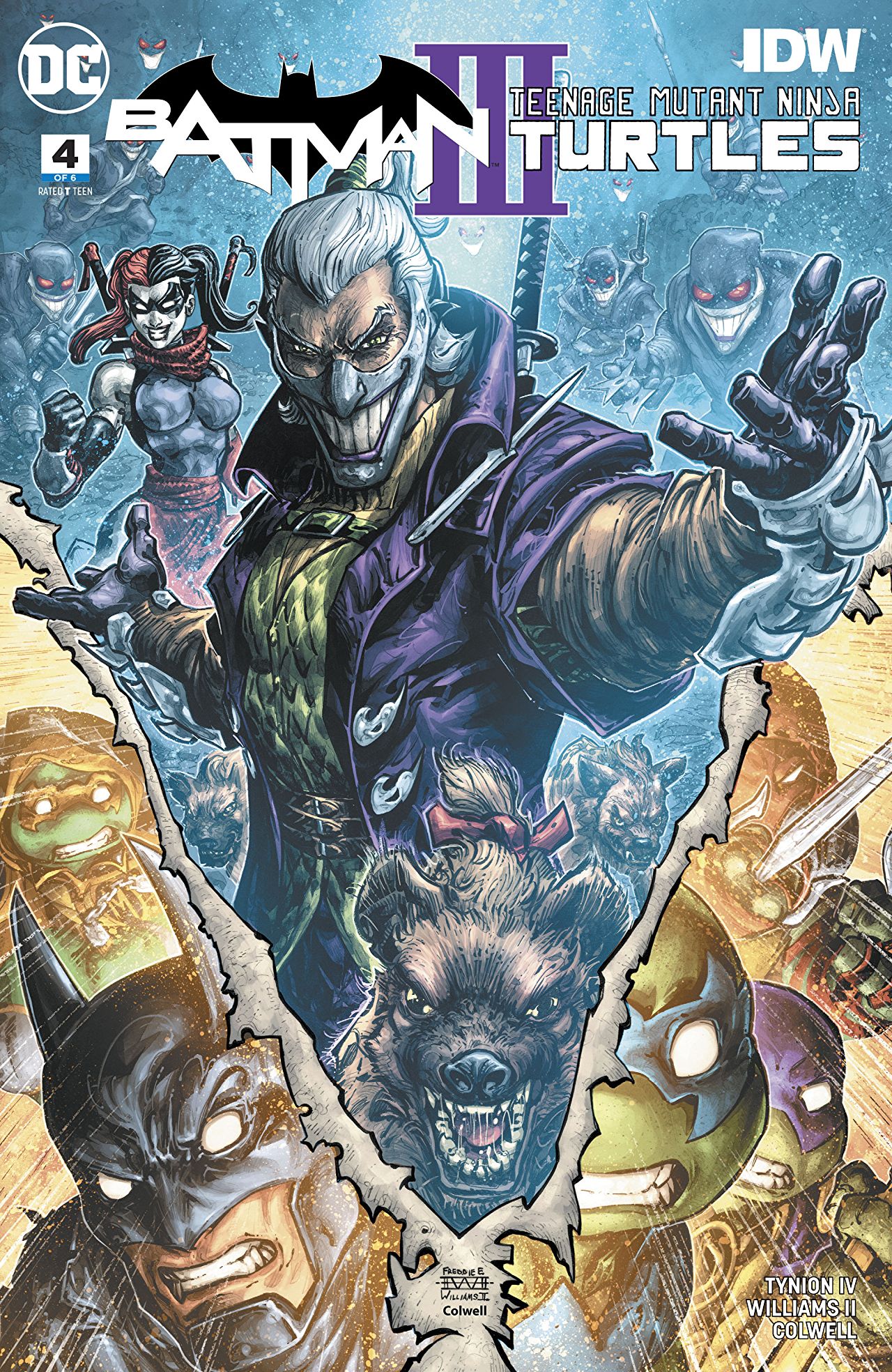 Overview: Batman and Turtles use their fragile alliance with Shredder to try and reset the Laughing Man’s memories.

Synopsis (spoilers ahead): The Laughing Man is interrogating one of his own men to get information on the mysterious Shredder who is taking out his weapons warehouses.

Shredder is regaining control of the Foot Clan.  Batman and the Turtles come to him to explain that they need to draw the Laughing Man out to expedite Krang losing control of the world.  They debate the value of bringing back the Joker, but Batman says that it has to be done.

The Laughing Man asks Krang for help in beating this uprising.  Krang gives him a device to summon an army and tells him to target certain people who are able to tip the scales against them.

Analysis:  This issue is well crafted from a technical standpoint but the narrative feels a little lacking and contrived.  That’s not to say it isn’t still fun, because it is, but it isn’t as compelling as the previous volumes of this crossover.  I think part of the reason it doesn’t have the same energy is that Krang’s master plan feels very incomplete.  For a being of such immense power, his plan has some massive holes in it that are causing it to fall apart.  With this issue specifically, nothing much really happens outside of Joker being restored.  The Laughing Man was an interesting villain when he was first introduced, but here he is just Krang’s minion who is constantly outmaneuvered.  I also don’t really see how Batman thought the Joker would help him if his memories were restored.

The best parts of this issue, in my opinion, are the debates Batman has with Shredder about bringing Joker back, the short talk he has with Master Splinter and the art of the book.  Yet again we see someone confront Batman about the Joker’s history and we see Batman feel conflicted over the need to bring him back.  This is one of the reasons I don’t understand how Batman jumps to thinking Joker will help him later in the issue.  The conversation with Splinter was also interesting because it vaguely touches on the debate of Batman working alone versus with the Bat-Family.  Given the hints in the past issues, it’s likely we will see Bruce rediscover the Bat-Family and realize that Batman doesn’t have to be alone.  But with only two issues left, I wonder how much we will see them as this story is already full of characters and will have to be concluded.  The art team continues to do a great job, particularly with the action scenes and the different shades of color.

Final Thoughts: A fun yet unspectacular issue that doesn’t quite capture the same magic from the previous crossovers.