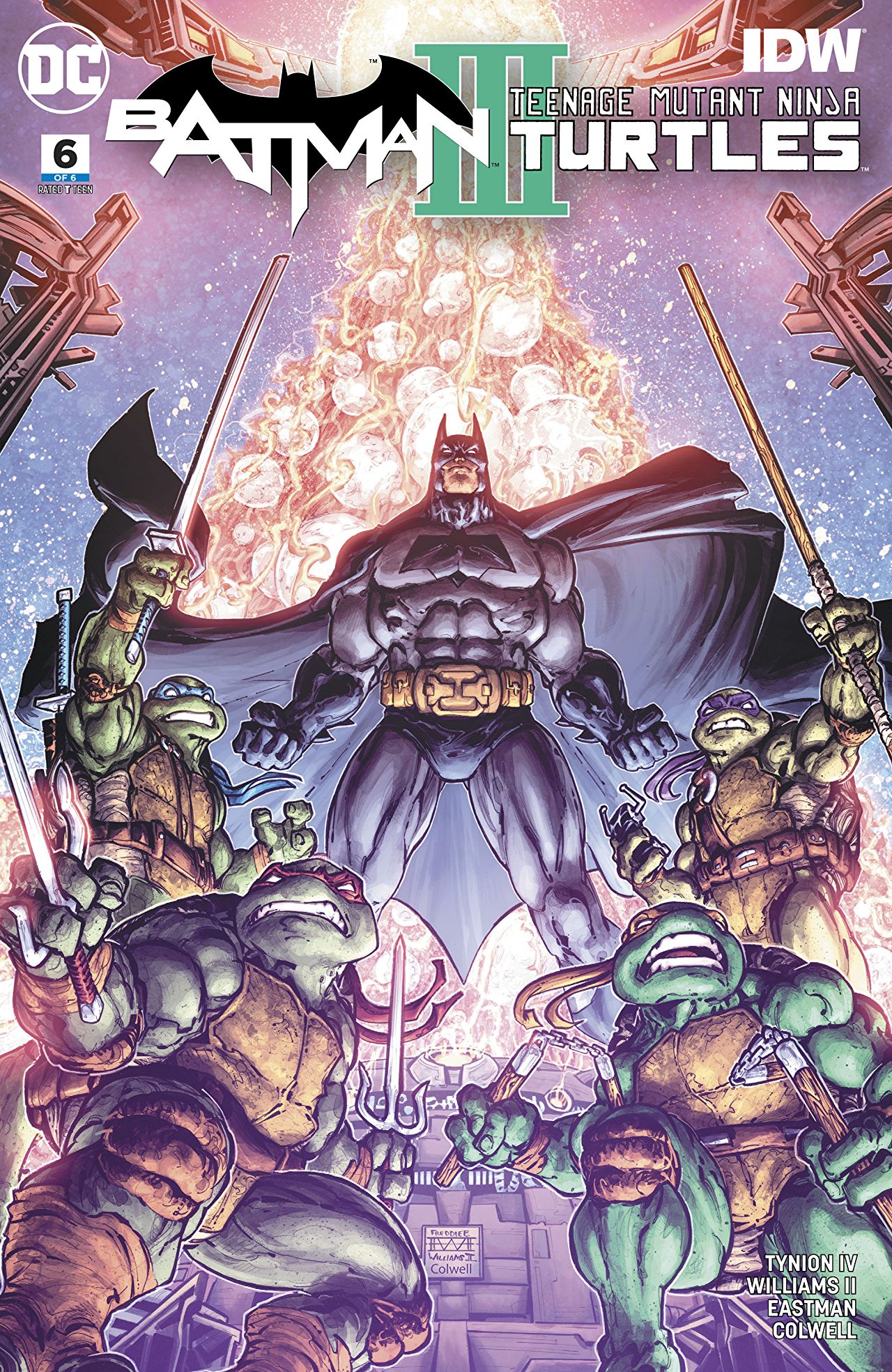 Synopsis (spoilers ahead): Shredder and Casey Jones continue the fight at ACE Chemical as the Bat-Family and the Turtles fight in Krang’s technodrome.  Alfred heads for the Batcave and Master Splinter and April head to ACE Chemical to warn Casey about the worlds splitting apart.  Batman concludes that they need to focus their attack on the tower to get the multiverses back into place and trap Krang’s dome in between.  The Turtles and Robin use spray paint to distract Krang while both Batmans go for the tower.

April reunites with Casey Jones and the Foot Clan disappears after sealing the doors of the factory which then phases out of existence.  The black and white Turtles get the boom tubes open and go back to their world.  The other Batman also goes back to his world and says that it’s been an honor fighting with all of them.  The Batman who stays behind ignites some explosives on the tower as Krang panics.  Krang tries to use his power to force them all together but Batman and the Turtles reject his efforts.  Batman clicks the detonator and the dome starts to blow up.  Before it’s completely destroyed, all the heroes evacuate the dome and say their goodbyes before fading into their own worlds.

Back in Gotham City, Batman instructs Alfred to order a large stack of pizzas so the entire Bat-Family can enjoy a night off.

Analysis: The final issue and the end of this miniseries concludes in a rather predictable and unspectacular manner.  I mentioned in the previous review how the fight seems to resolve itself simply because the plot requires it to do so rather than because there is a well thought out reason and that continues in this book.  The “science” behind the resolution of a multiverse spanning conflict like this is always going to be a little out there, but it doesn’t feel like it even tries to make sense despite spending quite a bit of page time trying to explain it.  Krang continues to be a completely inept and uninteresting villain.  The start of the series teased a menacing villain with grand plans but that never panned out.  While everything is falling apart around him due to his inexplicable decision making, Krang just flails around in one spot ineffectually and tries shouting as a primary strategy.  Needless to say, it’s not effective.

While the resolution is too convenient and the villain is too simple, there were a few things I liked about this issue and the series overall.  As I’ve said before, you can really tell that the creators love these characters and want to see them happy and that’s consistent with Tynion’s work in the previous volumes of these crossovers and in his work on Detective Comics.  The banter shines in places and there are plenty of moments of fan service that are slightly cheesy (pardon the pizza pun) but also enjoyable for any fan of these characters.

The art was a really bright spot throughout the series and is at its best in the final issue.  We get some beautifully laid out pages filled with extraordinary amounts of detail and texture.  There are also some fantastic panels that are group shots of all the characters together.

Final Thoughts: If you have been following along the story so far, you probably don’t want to miss out on the finale.  If you just want to see your favorite characters like the Bat-Family and the Ninja Turtles hanging out together and beating bad guys (or robots), then this is also the book for you, just don’t expect anything deeper than a fun adventure.