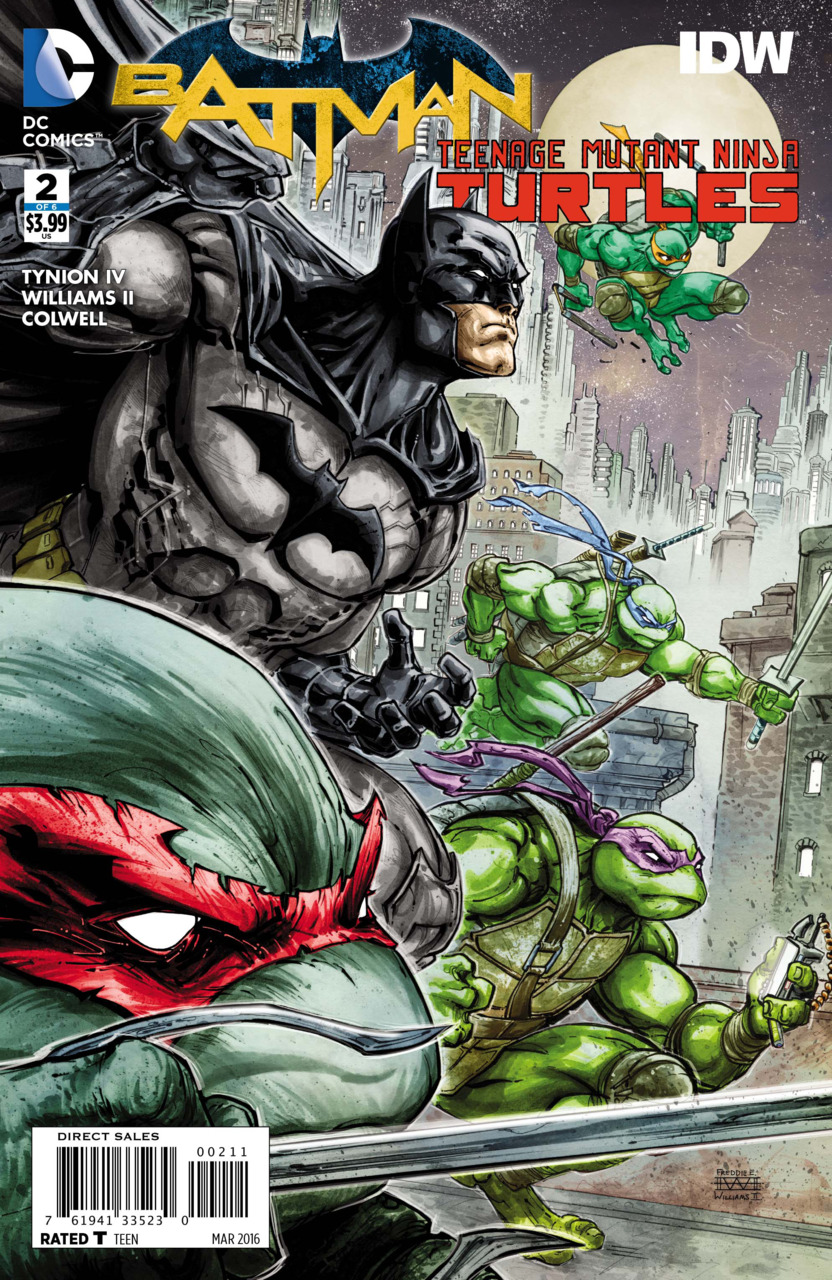 Bursting into a pizza parlor, the issue opens with Michelangelo running and shouting to the various Gothamites to run because of a giant bat. As a grappling hook wraps around him, Mikey is pulled through the window back into the battle against Batman. Taking advice from Leonardo, he tells his brothers to attack together to overwhelm the Dark Knight…Batman responds with a confident “you’re welcome to try.” Jumping into the fight, the four turtles battle against Batman using their various weapons…but Batman quickly disarms and incapacitates each of them. Realizing they are on the losing side, Batman disarms Leonardo with a sai stolen from Raphael…however; Splinter drops down into the battle and tells his sons to leave. Facing off against the sensei, the two fight briefly before Splinter drops a smoke pellet and disappears.

Later on, the four turtles are recovering from the fight and are digging up information about their foe. As Donatello researches Batman and his foes, Michelangelo makes an “Awesome” and “Not-Awesome” list in regards to Batman…meanwhile, Raphael broods about his lost sai and Leonardo comes to the realization that Batman was fighting like a detective – analyzing their fighting styles and battling against them.

Across the city, Bruce Wayne is busy analyzing the sai that Batman recovered from the battle alongside Lucius Fox. Fox discovers that the sai comes from another dimension but it is slowly realigning itself to their universe…therefore, anything that comes through will also return to its former state. Lucius then updates Bruce about the resonance engine that he had removed from Wayne Enterprises due to the other thefts.

Back in the Batcave, Batman gets suited up as he updates Alfred on the situation with the turtles and how they will more than likely revert back to their original state. Unknown to the Dark Knight, Splinter is seen dropping down behind the detective and accesses the batcomputer.

Catching up with our villains, Shredder is seen meeting with the Penguin as the latter appropriates the Waynetech Resonance Generator needed to finish building the portal back to their own dimension. However, Shredder eventually double crosses the Penguin as dozens of Foot Ninja drop down onto Penguin’s troops.

As the issue closes out, the Turtles have rallied behind Splinter and are busy working their way through a series of tunnels. Splinter informs them of the dimensional realignment and that if they do nothing they will revert back to their original states. Realizing they need help, our heroes emerge into the Batcave as Michelangelo comments that he wants to play with the giant T-Rex.

I really loved this issue. Merging the Ninja Turtles and Batman is probably one of the best ideas in comic book history.

That aside, I really loved the battle between the Turtles and Batman…it was nice to see Bruce face off against the turtles as a whole and individually. I liked that Batman was able to display his intelligence and fighting prowess by using the turtle’s weapons against them.

Following the action, we continue the story by learning that the Ninja Turtles will return to normal turtles eventually and of course this causes some serious issues with our heroes. We also update with the villainous Shredder who teams with none other than the Penguin to gain what he needs.

This was a pretty straightforward issue that started with a bang, expanded our story and introduced a sense of urgency and trouble and then finished up with a great scene where the Turtles arrive inside the fabled Batcave itself.

Obviously we know that the Turtles will win out the day and not be turned back into turtles, but I’m curious to see what will happen in the battle against Shredder. We see him utilizing the Penguin as a resource…do you think he might look into some other of Gotham’s rogues such as Riddler or Joker to complete his plans? Or maybe to use as a distraction against the Turtles? I think it would be interesting to see the brothers battling against the likes of Mr. Freeze or Bane while Batman battles against Shredder and the Foot Clan.

Overall another great issue and I’m looking forward to this series continuing next month.