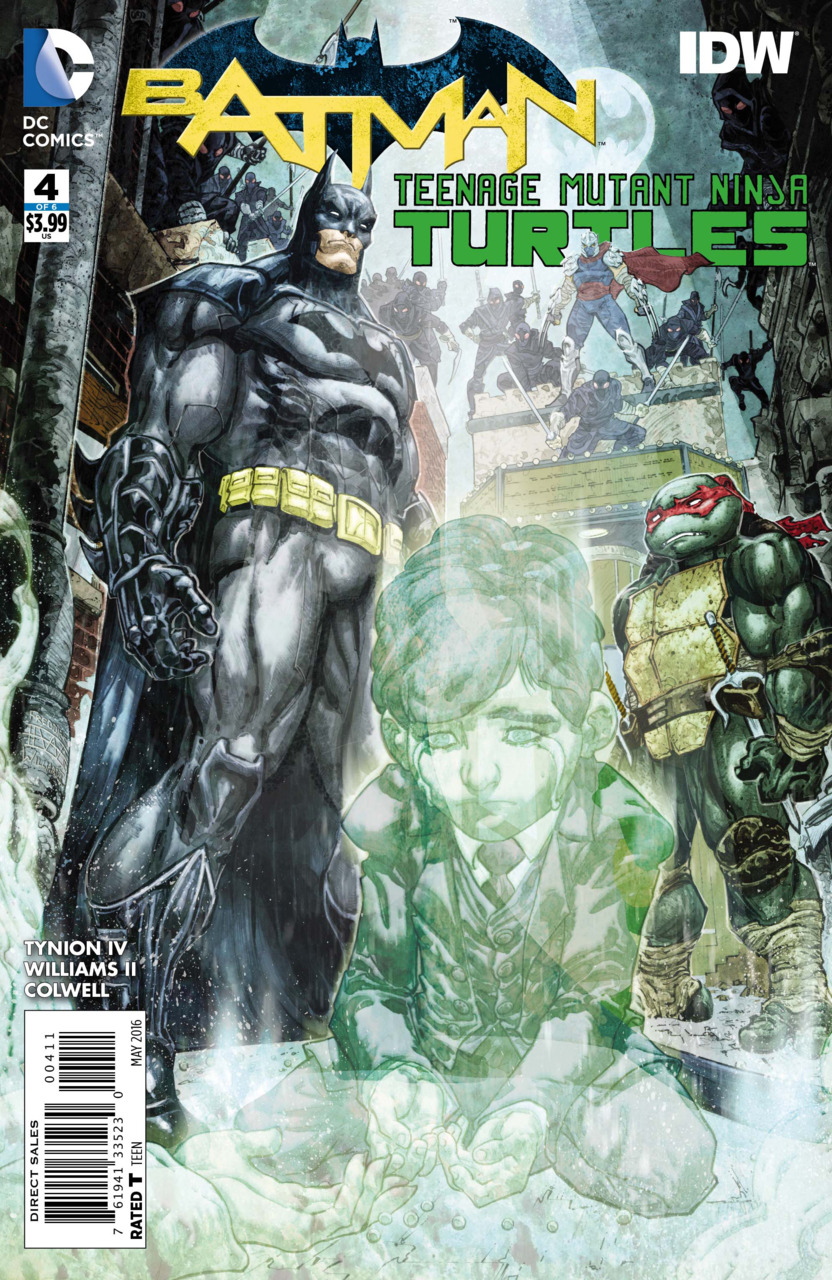 This month’s issue opens with Dr. Mahreen Zaheer interviewing a member of the Foot Clan at Arkham Asylum, home to Gotham’s criminally insane. Realizing that her patient won’t be giving up any information, Zaheer has the Foot member returned to his cell. Walking down a corridor, Zaheer passes by the cell of the Joker, where the Clown Prince informs her that he won’t be “left out of the party for much longer.” Tasking an orderly to double the clown’s medication, the scene cuts across Gotham to stately Wayne Manor.

As Alfred receives a massive order of pizza from a delivery man, the butler turns to witness Michelangelo skateboarding down the banister of the main staircase. Crashing into Alfred, Mikey quickly apologizes and notes that the pizza is still good.

Down in the Batcave, Batman is busy sparring with Leonardo as Splinter looks on and gives instructions to his son and the bat. Gaining the upper hand, Leo manages to throw Batman to the ground. As Raphael looks on in anger, Donatello is working on the Batcomputer and rewatches some footage from Batman’s cowl of a recent battle involving the turtles, Batman and the Mad Hatter. Donnie additionally informs the reader that he has been working with the Justice League (specifically Cyborg) to find a cure for the turtles reverse mutation. With Mikey and Alfred arriving into the cave with pizza, all of the heroes take a break from their respective tasks to eat.

Raphael however gets extremely upset over the others taking a break while he sits wounded and still without a cure. He eventually storms off.

As we cut to the lair of our villains, Shredder is discussing the creation of a new portal alongside his ally Ra’s Al Ghul. Shredder instructs for the portal to be turned on as he has pinpointed an anomaly that has been attempting to enter this dimension. As the portal opens, a barrage of hockey sticks and golf clubs rains down on the Foot as Casey Jones arrives to help his friends.

Cutting back to sulking Raphael, Batman pulls up in the Batmobile and tells the turtle to come with him. Back in the cave, an alarm sounds informing the remaining turtles and Alfred that a portal has opened within the city.

Arriving in crime alley, Batman tells Raphael how his parents had been killed in front of him as a child and that these events had changed his life forever. Raph comes to the realization that (although seemingly crazy) Batman has only the best intentions to help him and his brothers.

As the issue closes, the turtles arrive to find a badly beaten Casey Jones who informs his friends that he attempted to cross through the portal to bring them the much needed help to save their lives. He tells the turtles that Ra’s and Shredder now have a massive amount of mutagen and were headed to Arkham Asylum.

I have to say that this series has been getting greater with each issue that comes out. Williams and Tynion have truly found a great rhythm with their story telling and fantastic art.

When we open this issue we find that a little time has passed since the previous issue as the turtles have had a few adventures alongside the Batman while Raphael is recovering from his injury. We also get to see some great character moments as we see Michelangelo’s love for pizza and Donatello’s love for Batman’s tech. I also really loved the sparring session between Leonardo and Batman…particularly Splinter’s instruction right before Leo beats Bruce.

I’m definitely looking forward to next month as we saw Ra’s and Shredder getting ready to enter Arkham with their trusty bag of mutagen containers. I think it’ll be interesting to see some of Batman’s foes turned into freakish monsters…particularly Joker. Although I think a monster version of Scarecrow, Victor Zsasz or even Penguin would be pretty interesting.

Overall this was a great issue and I loved that Tynion managed to work Casey Jones into the series….definitely looking forward to the next issue.