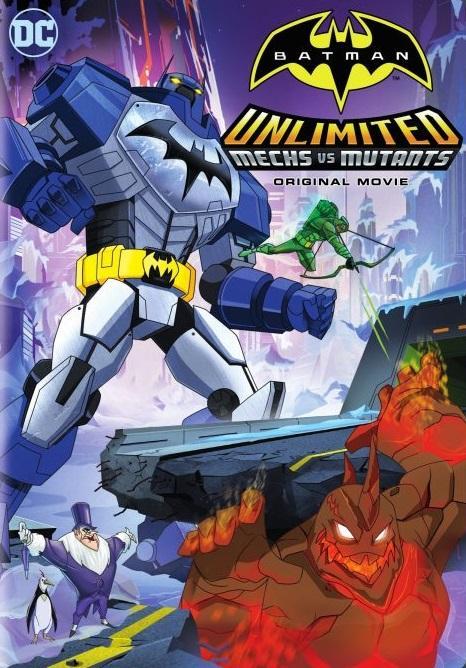 Batman and Robin save Gotham from Mr. Freeze and Penguin’s supersized army of Arkham residents in Batman Unlimited: Mechs vs. Mutants.

A frozen Gotham City is being attacked by a supersized Killer Croc that shoots freeze blasts out of his mouth. Batman arrives inside a giant robot and the two behemoths battle Pacific Rim style.

How did we get to this frigid dark place? Let’s go back in time two weeks and find out.

Robin is in the Batcave upset over a mistake he made fighting crime the night before. To compensate, he is studying Gotham’s supervillains and asks Batman about Penguin. Batman says that he has sent Penguin away for a while.

In the Arctic, Penguin is complaining to his only real companion, Buzz, about being exiled to the Arctic with only the solitary Mr. Freeze as a companion. Freeze is a loner and upset about an oil rig that has set up shop nearby. To remove the interlopers, Freeze has created a machine that will supersize small creatures. He makes a gigantic sea creature which attacks the rig. Unfortunately the rig crew has a laser drilling machine that defeats the mega crustacean. Penguin convinces an upset Freeze that his problem is that he is thinking to small and must return to Gotham to implement a devious plan. They take Freeze’s submarine to Gotham.

They arrive at Arkham and release Clayface, Bane, Chemo, and Killer Croc from the asylum. Batman and Robin arrive to scope out the action and Green Arrow joins them. After a fight and another Robin misstep, the bad guys get away through subterranean tunnels.

Back at Freeze’s hideout, the chilly doctor combines Clayface’s mutating flesh, Bane’s venom, and Chemo’s toxic sludge and injects Killer Croc with the mixture. Croc becomes gigantic and the gang heads off to Gotham. Upon arrival, Croc blasts a mouthful of frozen water onto the city turning it into a frozen tundra.

Batman and Robin find the giant Croc and fight him. The good guys are joined by Flash and Nightwing. Missiles don’t seem to faze Croc very much and Batman turns the Batmobile into a plane to escape. Flying away from the first encounter, Batman sees a gigantic Chemo spraying down the city with more snow and ice. Batman realizes that Freeze is turning Gotham into the Arctic.

Penguin flatters Freeze with the success of their plan and distracts him while Buzz steals some of the giant juice. They arrive in Gotham which is cold enough to remove his suit. Freeze realizes that Penguin is too much a risk to keep alive and decides to kill him. However, Penguin has given the serum to Bane and Clayface and they overcome Freeze. Bane heads off to settle a score with Killer Croc and the two fight.

Clayface attacks Batman and Robin but the serum makes him unstable and turns him into molten lava. Clayface uses it to his advantage. Robin flies the Batplane to distract Clayface while Batman heads to Wayne Enterprises lab. Dr. Langstrom shows Batman and Green Arrow two giant mech robots that the pair of billionaires have funded.  The two get into their respective mechs and head off to fight the bad guys. Green Arrow uses his mech to stop Chemo from freezing Gotham. Langstrom presents Robin with the plans for a device to defeat the lava ridden Clayface. The two, along with Flash and Nightwing begin to build the device. The first test of the device fails. Freeze realizes he was tricked by Penguin and decides to clean up his mess by helping the team and goes to work to repair the weapon.

Freeze operates the device to defeat Clayface with an ice ray.  It works, but Freeze is hurt by the high temperatures of the lava. Robin rushes off to get his Freeze suit which saves Freeze’s life.

If you like giant creatures punching and fighting this movie will work for you. There is a certain amount of humor in the dialogue, but it is really just chuckles here and there, the focus is on the big battle which takes up about half the movie.

The issue that I had with the movie is the unusual characterizations of some of the heroes. Damian, older here than in the comics, was presented as insecure about his skills and training as a superhero. In terms of the movie itself the character arc worked, but this isn’t the arrogant Damian we have been presented in the comics. This made it hard for me to really get into the plot.

Also, Nightwing, with a red emblem on his costume, was extremely rude to the eager to please Flash. As I’m not a Flash reader, I’m not sure if this is part of the comics but it seems totally out of character for the compassionate Dick Grayson.

While these quibbles might seem small, I am personally bored by extended fight scenes so the main draw for me here is these characters that I love. Maybe the movie universe characterizes these heroes differently than the comic universe, but as a comic fan the strange personalities was a problem.

If you like extended fight scenes between giant monsters and robots and don’t care much about the presentation of DC characters you will probably enjoy this movie. As for me, there wasn’t much to like except for the occasional chuckle, though it was a harmless way to spend an hour and a half or so.

Batman Unlimited: Mechs vs Mutants is available to day on DVD and digital HD. You cna order you DVD version of the film on Amazon by clicking here.