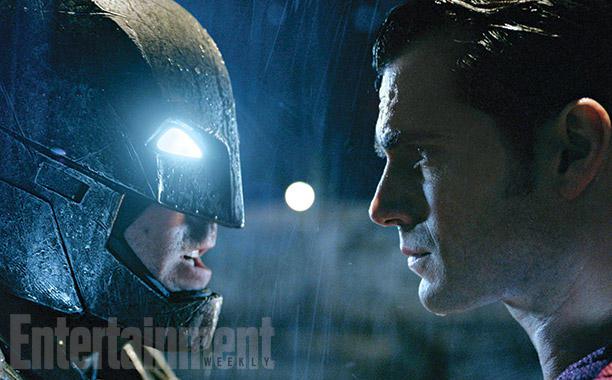 Well, if you haven’t seen all of the details from the latest Entertainment Weekly issue dealing with Batman v Superman, we are going to round them all up. We posted a couple when the cover and stills were first released, so be sure to check those out as well. Some of the new details have flown under the radar due to the holiday weekend here in the states. So first lets take a look at some of the highlights from the published newsstand version of the magazine.

There are a couple of scenes that are described throughout the article, but the main one of interest deals with Wayne Manor and Gotham. A description of Wayne Manor was given.

…as a serrated wind slices through the derelict husk that was once Wayne Manor, strewing dead leaves across the floor. The set has been built in the middle of a field that looks like Andrew Wyeth painted it in a bad mood, only miles from the urban decay of Michigan’s shuttered auto plants.

As if Gotham and Wayne Manor could sound any more dreary than normal, the description makes Wayne Manor sound as if it has been abandoned or at least from the public eye.

We all know the secrecy has been huge for the film. Despite filming over eight months very few spy pics from set have appeared online. The secrecy is not without its reasoning though as even this past April the trailer leaked prior to the intended release. When speaking with EW, Jesse Eisenberg was described as wanting to talk about what his character has in plans for Superman, but there were other forces in charge.

“They given me talking points which are…I’m just a little concerned,” he says, before he’s even been asked a real question. “I don’t know if I’ll be able to form full sentences.”

EW also describes talking to one of the propmen who was showing off Batman’s new grapple gun.

…mentions that there was one item in particular he was really excited to work on…but he can’t talk about it. Might it begin with the letter k and end with ryptonite? An expression of panic crosses his face and he glances down at the grappling gun as if he’s considering firing it into the rafters and flying away.

Initially, Batman was never intended to be in this film. The original plan as told by Snyder was trying to figure out the next villain for the next Superman film. They mentioned Brainiac, but being another alien invasion angle they decided that Metallo was probably the best bet. But then Snyder mentioned a unique scene for the end of Man of Steel where a full crate of kryptonite gets delivered to Wayne Manor. After mentioning that the project exploded to what we know know as the beginning of the DC cinematic universe.

Cavill has said in the past that this is not a sequel to Man of Steel even though everyone initially believed it to be. He stated that is more of an introduction to Batman and an opening to the Justice League as an expansion of the world that was created in Man of Steel.

The published article also deals with Affleck’s initial reaction to the film wanting him to play Batman. He said that he even asked them if they were sure of him in the role and Snyder convinced him. There was an extended version of that point in an article on EW’s website diving more into it.

Another reason Affleck took the gig: It’s been awhile since he’s been in a production this big and he wanted to see how the gears turn on the inside. “I thought if I was going to direct a movie like this, which I would like to do at some point, I need to have something of a refresher course of how these movies are done,” says Affleck, who has been recently rumored to be in the running to direct himself in a standalone Batman movie.

Another extended version of the article on EW’s website talks about the ending of Man of Steel and how it will addressed in Batman v Superman. The large amount of casualties is a concern for Bruce Wayne since some of them worked for him.

“One of the things I liked was Zack’s idea of showing accountability and the consequences of violence and seeing that there are real people in those buildings,” says Ben Affleck, who plays Batman. “And in fact, one of those buildings was Bruce Wayne’s building so he knew people who died in that Black Zero event.”

A couple of other quick news points that were mentioned:

-The majority of the plans for the slate of films came from their imaginations as well as comics mythology.

-Some pot shots were taken at the Marvel films by both Snyder and Affleck with Affleck saying, “It is more mythic, it is more grand in that way, and it is a little more realistic. Just by nature, these films can’t be as funny or as quick and as glib as Marvel movies.”

So what do you think of the new details? Could Affleck have taken on the role of Batman to get in the directing chair for a standalone Batman film? Sound of below.