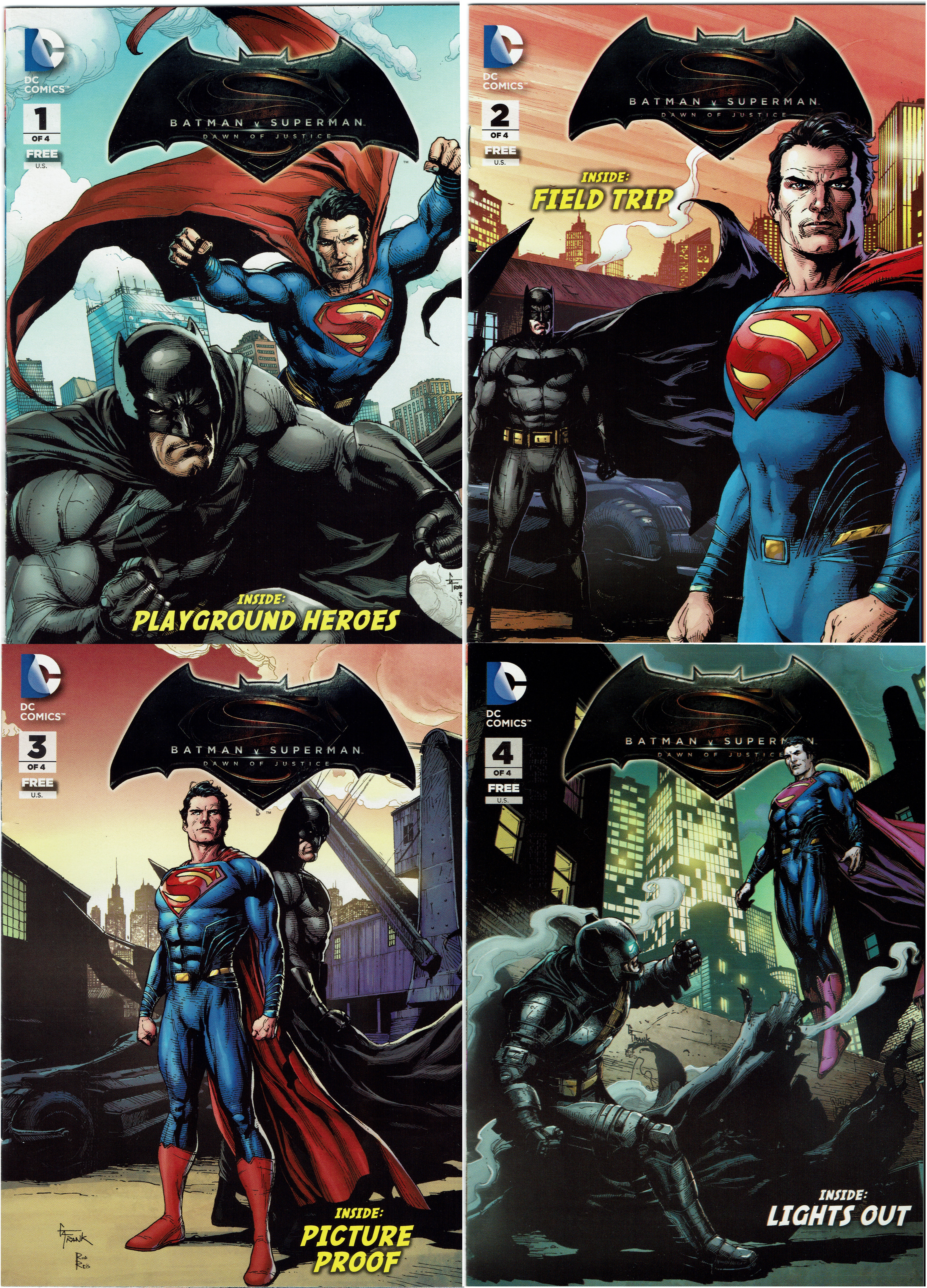 Today we continue our look at the tie-in material for Batman v Superman: Dawn of Justice. If you didn’t catch part one of our coverage, yesterday, head over here to check it out.

A junior reader’s level novel from Scholastic publishers, Cross Fire sets up a “they almost met each other” scenario for Batman and Superman through a child who is caught between them by the actions of his criminally insane uncle.  While the story is reasonably engaging, nothing of importance really happens, and the depth of characterization of all of the people featured doesn’t provide much engagement or additional depth for the adult reader. This book serves much the same function as the General Mills cereal comics, reviewed next, but without the high-caliber art and stronger writing of those titles, the book doesn’t do much to stay in the memory.

Summary (Spoilers): Jacob Washington opens writing in a journal he says he just got back. That morning, he carpooled with his new neighbor, Lucas, who is wearing a Superman shirt. In the car, Jacob catches Lucas up to speed on school in Metropolis, and Lucas is very excited about the chance to see Superman. Later, Jacob sees Lucas being bullied, and feels bad but does nothing. They go on a field trip to Star Labs, led by Clark Kent, where they are working on teleportation of materials for space travel, but they accidentally teleport some aliens who want to take over earth. Superman breaks into the lab, the aliens identify him as another alien, but Superman claims he is an Earthling, and fights them off. Jacob thinks about the reason Superman is a hero, because he doesn’t see himself as a god, but as another person who tries to do the right thing. When they get back to school, Jacob stands up for Lucas, inspired by Superman, and backed up by him. Superman returns his journal, and Jacob says that Lucas seeing him as a hero was better than seeing Superman. Summary (Spoilers): Another field trip, this time to Wayne Enterprises. We see lots of sciency stuff, and the tour guide talks about military tech, medical tech, and biotech weapons. Zoe, the daughter of a Daily Planet reporter, is bored with all the public knowledge stuff, and sneaks off (ditching her friend Evan) to fulfill her Pulitzer dreams. She stumbles on four crooks stealing the alien weapons. Bruce Wayne surprises her, having followed her and seen the same thieves. The two are captured, Bruce tries to get Zoe to safety, but the crooks are evil. Zoe breaks the jammer, and Superman captures three of the crooks outside as Bruce Wayne takes the last one inside. We find out the Wayne Enterprises is covered with lead to block Superman’s x-ray vision. Zoe and Bruce send feedback through the crook’s comms, allowing Superman to capture them without hurting them seriously. Bruce tells Zoe she’s very brave, and that doing right is the ultimate thing. He also says he’ll meet Superman later.

Picture Proof
Written by Margurite Bennett
Pencilled by Marcus To

Summary (Spoilers): Opening on Gotham with a monologue about darkness in the city, until Batman arrived. Two crooks running from Batman in a car, the hero on a bike, the narrator hiding behind a newstand trying to get a picture of Batman. Batman uses his bike to crash into the car and stop the criminals, but a CD falls into the sewer. Batman’s jammer locks up Emily’s phone, so her friends don’t believe her at school the next day. Brian doesn’t believe her and mocks her, while her friends Jacob and Hailey defend her. Desperate to prove herself, Emily goes back to where she saw the disc fall into the sewer, and manages to get a very good picture of Batman emerging from a manhole. She prints it out, and meets her friends, but Brian is even meaner, even though Hailey and Jacob defend her again, telling Brian that it’s kinder to not do mean things. That night, Batman drops by her room, telling her not to be afraid of him, that she is what he wants for the city – to be better, and that he trusts her to do the right thing. Emily tears up the picture to preserve Batman’s details so that criminals fear him and he can make the world better. She leaves the pieces in the rain in the shape of a Bat.

Lights Out
Written by Joshua Williamson
Pencilled by Eduardo Pansica

Summary (Spoilers): One night, as a large group of small children are in bed, three boys (Robbie, Carter, and David) are arguing about who is better, Superman or Batman. Carter thinks Batman is best, Robbie thinks Batman is best. They give many arguments – coolness, powers, effectiveness, gadgets, more powers, providing humanitarian and social aid. The two boys gear up to fight, mirroring in their imagination the fight between Batman and Superman. A little girl walks in with a Batman doll and Batsignal flashlight, telling them they are being silly. 1) Batman and Superman would be friends and work together, and 2) Wonder Woman would beat them both.  The boys agree and go to sleep.

In Depth: In contrast to the Doritos and Dr. Pepper comics, these stories are available in hard copy only by purchasing specially marked boxes of General Mills cereal. All of the comics were edited by Alex Antone, one of DC’s digital division editors, and assistant edited by Brittany Holzherr, the Assistant Editor of Special Projects at DC. Antone has worked on most of the video game and television tie-in properties for DC for the past several years, while Holzherr has served in several projects recently, including every issue of the Convergence event. Both editors seem to have done a strong job of keeping the tone and universe consistent, as well as managing to schedule much stronger talent than one expects from promotional tie-in material. That talent includes Christos Gage, writer of the other sets of promotional comics, here joined by writers Jeff Parker, Marguerite Bennett, and Joshua Williamson, with artists RB Silva, Federico Dallocchio, Marcus To, and Eduardo Pansica. In an interview released for General Mill’s website, the editors mentioned that they worked to fit their stories to the medium – since the comics in cereal boxes are about half the size of “normal” comic magazines, they pushed for a lower panel count so the details on the art are more visible, though like previous cereal box comic “prizes,” they still contain twenty pages of narrative content. Each story works to involve kids’ imaginations into the way they might fit into the world of Batman and Superman – the main character of each story is a kid who encounters one or both of the heroes in everyday circumstances.

Parker, writer of the Batman ’66 comics, is joined by Silva, perhaps best known for his various work on the Superman family of books, and the Red Hood and the Outlaws series.  Their story, though perhaps a bit more fanciful than the others, deals with children witnessing an attempted alien invasion thwarted by Superman. Many enjoyable resonances with both the film and comic worlds of Superman appear, from the main character wanting to be a journalist (providing the framing narrative of the story), to Star Labs, a guest appearance by Clark Kent, and the idea of humans being inspired by Superman’s heroism to “join him in the sun,” as Jor-El says in Man of Steel.

Dallocchio, perhaps best known for his work on the first year of Suicide Squad for the new 52, as well as StarCraft comics, and many, many other video game tie-in comics, collaborates with Gage for their comic about another field trip, this one to Wayne Enterprises. Gage provides a more satisfying and humorous story, freed from the constraints of trying to explicitly setup character traits or moments from the film, and instead builds a fun relationship between Bruce Wayne and Zoe, the daughter of one of Lois and Clark’s colleagues from the Daily Planet. Dallocchio’s art is gritty and realistic, though it lacks a bit of panel variation – most of the pages have a steady four parallel panel strips layout. Zoe’s sass and bravery, and Bruce’s heroism and concern for her provide a strong emotional engagement throughout the story.

Marguerite Bennett, student of Scott Snyder, and writer of both fan-favorite and occasionally controversial comics like DC Comics Bombshells and Angela Queen of Hel, teams with popular artist Marcus To, of the Red Robin series, and the upcoming Nightwing series with Tim Seeley. The two provide a really fun look at a girl trying to convince her friends that she’s really seen Batman – Bennett has a gift for fun, relatable dialogue, as well as some nicely emotional moments when Batman finally talks to Emily, our main character. To’s clean, appealing art draws us into the small story, including some nice moments which might hint at the way Batman inspires Gotham city – having Emily’s glasses form white sheets, just like Jim Gordon or Carrie Kelley, Batman’s Robin in the Batman v Superman-inspiring comic series The Dark Knight Returns.

Finally, Joshua Williamson, an indie writer who has also written a couple of similar promotional comics in the past, and newly announced writer for the Flash in DC’s Rebirth, joins Eduardo Pansica, extremely efficient and appealing artist for key issues of Batman Eternal, Wonder Woman: Odyssey, Convergence, and Earth 2: World’s End. Williamson and Pansica tell a funny and exciting little story of three small boys doing what we comics fans do best: argue about who is the best superhero. The powers and speculations do a lot to build out the world of Batman v Superman, and the art provides some funny details, like the two main characters gearing up to fight in the same poses as Batman and Superman from the film, as well as the funny little Batman stuffed animal and Batsignal flashlight the little Wonder Woman fan at the end of the comic holds.

All in all, the four General Mills comics provide the most polished and satisfying stories of the promotional tie-in material available, mostly because they are trying to tell their own stories and not focusing too much on setup or connection to a specific element of the film, and because of the high level of talent behind the writing and images.