TBU Collected Review: Batman vs Bigby: A Wolf in Gotham 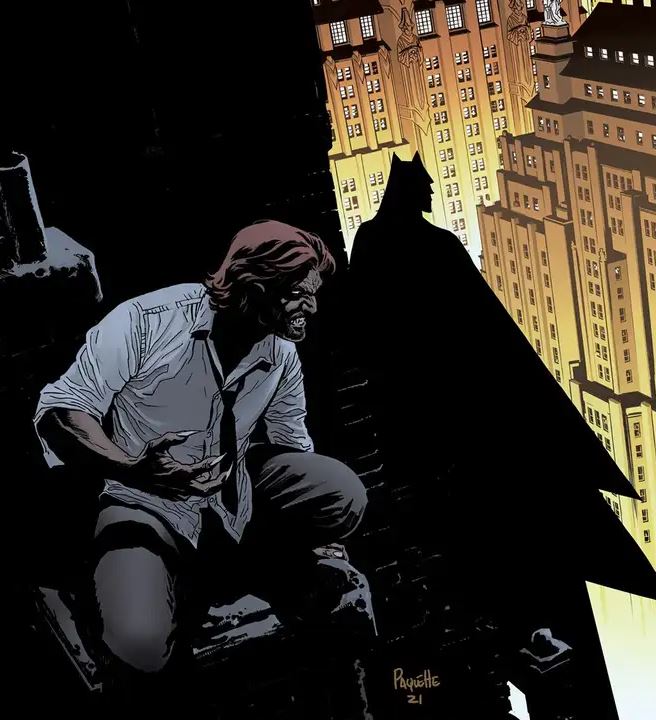 Overview: Bill Willingham returns to Batman after around a decade and a half in a crossover miniseries highlighting two “alpha male” characters in Batman vs Bigby: A Wolf in Gotham. Will their clash bring light or destruction to Gotham.

Editor’s Note: This collected edition includes all six issues of the miniseries Batman vs Bigby: A Wolf in Gotham, which had its first issue released in September 2021 and the final issue released in February 2022. This review focuses on the story as a whole rather than the individual issues that made up the limited series.

Synopsis (spoilers ahead): Chapter One: Bat, Wolf, Worm – Once upon a smoky Gotham night, Robin gets a tip from an informant, relaying it to Batman, who investigates a large number of dead bodies, seemingly mauled by a huge animal. Across town, the crime lord the Bookworm celebrates the retirement of one of his henchmen (all of whom take the names of great authors).

Batman meets with multiple Robins to report about the bodies, orders them back to the nest, then heads out to investigate.

Bookworm orders the death by torture of one of his men, and his right-hand woman, Mrs. Stacks, warns him of treachery.

On the GCPD rooftop, Commissioner Gordon introduces Batman to a new detective, Lt. Molly Grace, and discusses the strange killings and the possibility of a huge wolf.

Bookworm’s torturer tells his boss their victim didn’t have “the book”, and they plan a spectacle to get it.

Batman finds a grimy-looking man, fights him, then gasses him and brings him to the Batcave (astute readers of Fables will recognize Bigby Wolf).

Chapter Two: Blow the House Down – Bruce Wayne wakes up to find his prisoner escaped and his entire Batcave in ruins, seemingly caused by a huge wind. As the Nidifice, the Robin training building, Batman observes the Eggs and Chicks training, then tells Dick to send all Robins out to gather information on the wolf case.

Batman’s former prisoner, looking for the book, causes a scene at the Executive Exchange, a moving black market, then meets with the new detective Molly Grace, who he calls Cindy, and gets a report on the cops and Batman.

At the City Hall literary festival, Bruce Wayne is accosted by the man, who reveals he can smell Batman’s identity, and the two circle each other growling until a massive series of explosions tear the city apart.

Chapter Three: An Enthusiast’s Guide to Book Burning – We flashback to see Bookworm planning the explosions at libraries all over the city, and Batman and the man leap into action, Batman calling all of his Robins to his side. Two of them, Stephanie and Roberto, see a truly enormous wolf leaving one of the bomb sites, while Molly Grace stops the cops from shooting at the wolf as he saves people. Batman, Gordon, and Molly Grace meet, Batman revealing his agents have reported in, and only Bookworm remains as a suspect. He also tells Gordon he believes the giant wolf is real and plans to kill it. All of his Robins herd the wolf to the dump, where an armored Batman fires gas at the huge wolf, but the wolf speaks and attacks back this time.

Chapter Four: Who’s Afraid of the Big Bad Wolf? As we approach the halfway point of Batman vs Bigby, Bookworm tells his henchmen about the wolf, as Batman and the wolf battle as the Robins watch. Batman uses a reactive armor explosion to hurt the wolf severely, but it heals and transforms into a naked man. As Gordon orders all valuable books transferred to a secure location, Batman drives with the man (Bigby) as they both deduce they were set against each other by the Bookworm, who wants the book, a magical artifact from the man’s world. Meanwhile, Bookworm and his gang infiltrate Gordon’s secure location and begin using magic sniffers to find the book, but Batman and Bigby appear, having already found the book.

Chapter Five: Boats Against the Current – Batman attacks first, but Bookworm reveals shocking strength and knocks him out. Bigby fights him, but Bookworm triggers a huge magical pronouncement to get away, killing all of his henchmen in the process.

The Robins surround Batman, trying to revive him after his brutal beating from Bookworm, and they take him to Wayne Manor to be fixed up by Alfred. Thirteen days later, Bigby helps Batman escape Alfred and the Robins’ healing confinement to go hunt Bookworm, who was badly hurt in his escape with the book, and orders Mrs. Stacks to help him perform the ritual, revealing a second face on the top of his head. Batman and Bigby approach Bookworm’s hideout, planning to take him down and take the book.

Chapter Six: Wild Animals – As Batman and Bigby attack, Mrs. Stacks transforms into Grendal’s Mother to fight the wolf while Batman faces down the transforming magical Bookworm. Meanwhile, the Robins apprehend all of Bookworm’s gang all over Gotham, then pick up Batman and Bigby from the destruction of their battle. The thing possessing Bookworm crawls through Gotham’s alleys, but Molly Grace (revealed as Cinderella, Bigby’s ally) shoots it. Alfred quits in disgust at Batman’s self-neglect, and Bigby reveals that Frau Totenkinder, one of the most powerful witches, was possessing Bookworm, trying to resurrect herself after Cinderella killed her (and herself, but she got better). As Cinderella and Bigby go home to their dimension, Batman and Robin swing off into Gotham, pondering the strangeness of their world.

Analysis: Bill Willingham wrote Robin and several other Bat-Books in the mid-2000s, most infamously, War Games, and after over a decade and a half, he returns to Gotham to tell a crossover story of Batman and his most famous character from his creator-owned series Fables, Bigby Wolf, the Big Bad Wolf of the fairy tales, turned into a hyper-powerful private detective. Illustrated by longtime inker and artist Brian Level, Batman vs Bigby is perhaps a bit lightly explained for someone who hasn’t read all one hundred and fifty issues (plus tie-ins) of Fables, but for those who have read that masterful work, it’s quite a fun adventure!

As a Batman Universe fan, some may ask how this story lines up with either Willingham’s previous work or current continuity. Simply put, it doesn’t line up with either. The concept of Batman running informants in all of Gotham’s criminal gangs, plus a massive training operation for multiple Robins, doesn’t appear in any mainstream continuity. It does, however, connect strongly to the ideas Willingham played with during his tenure – the use of Orpheus as an agent in the criminal underworld during War Games and Willingham’s stated desire to tell the story of Stephanie Brown’s training under the master Dark Knight as a squire as a full story clearly extrapolated into how Willingham chose to expand Batman’s universe for this story. Batman’s specific training methods we see for his Robins – the structure of the Nidifice (Latin for “nest” or “concerned with the building of nests”) from Eggs to Chicks to Robins, and the concept of Robins functioning as a team rather than a single partner, present an exciting, though logistically very difficult writing exercise for ongoing continuity. Fans of Stephanie Brown, such as this reviewer, will find Willingham’s portrayal of the Girl Wonder quite enjoyable after what she was put through the last time he wrote her. Willingham has spoken many times about his attempts to save her from editorially mandated death, and in this alternate universe, he finally gives her a life as a respected veteran Robin, mentor to younger squires, and trusted by Batman. Many of the little interactions between Batman and the Robins give a lot of imaginative room to explore the further adventures of new characters like Jack and Roberto.

As a Fables fan, Willingham has said on his Substack that the series is canon to that series and takes place after the new arc of Fables, starting with issue #151, releasing on May 17, 2022. It’s very exciting for Fables fans to see both Cinderella and Totenkinder appear again after their seeming mutual destruction at the end of the last series seven years ago. All the little details of Bigby’s mission and what might have happened between #151 and now provide tantalizing hints at what we’ll get soon.

Brian Level doesn’t quite match main series artist Mark Buckingham (who is returning for the main series continuation), but he is quite good at giving appeal and personality to all of the characters, as well as very inventive paneling layouts, with plenty of literary, visual puns and structures. It’s hard to say if Batman vs Bigby is more fun for a Batman fan or a Fables fan, but it certainly is more rewarding if you are a fan of both properties. I don’t know if it will prove to be a good marketing tool for the new Fables series, as the pacing sometimes goes from an overly stretched out torture sequence to some brutally complicated but compacted exposition skimming over vast swathes of Fables history, but it’s certainly a real treat if you are in the know. Hopefully, people may be intrigued by the crossover and pick up the new four compendium collections of the full series plus the new series!

The paperback trade contains all of the main covers interleaved with the issues themselves and all of the variant covers by interior artist Brian Level at the back. The main covers by Yanick Paquette are suitably A-list Batman/fantasy blend, and Brian Level’s lean more into dark whimsy, with buildings made from books as Batman stalks his dreamlike city. No other extra material is provided.

Editor’s Note: DC Comics provided TBU with copies of the original issues of this series as they released, but not of this new edition. You can find this collected edition and help support TBU in the process by purchasing this edition digitally either for Comixology through Amazon, or as a physical copy in a paperback form at Amazon or from Things from Another World.

Batman vs. Bigby! A Wolf in Gotham

A dark, whimsical blending of a Batman alternate universe and Fables, with Willingham’s ideas about Batman given free reign, as well as a treat exploring the fate of beloved characters from his creator owned universe.