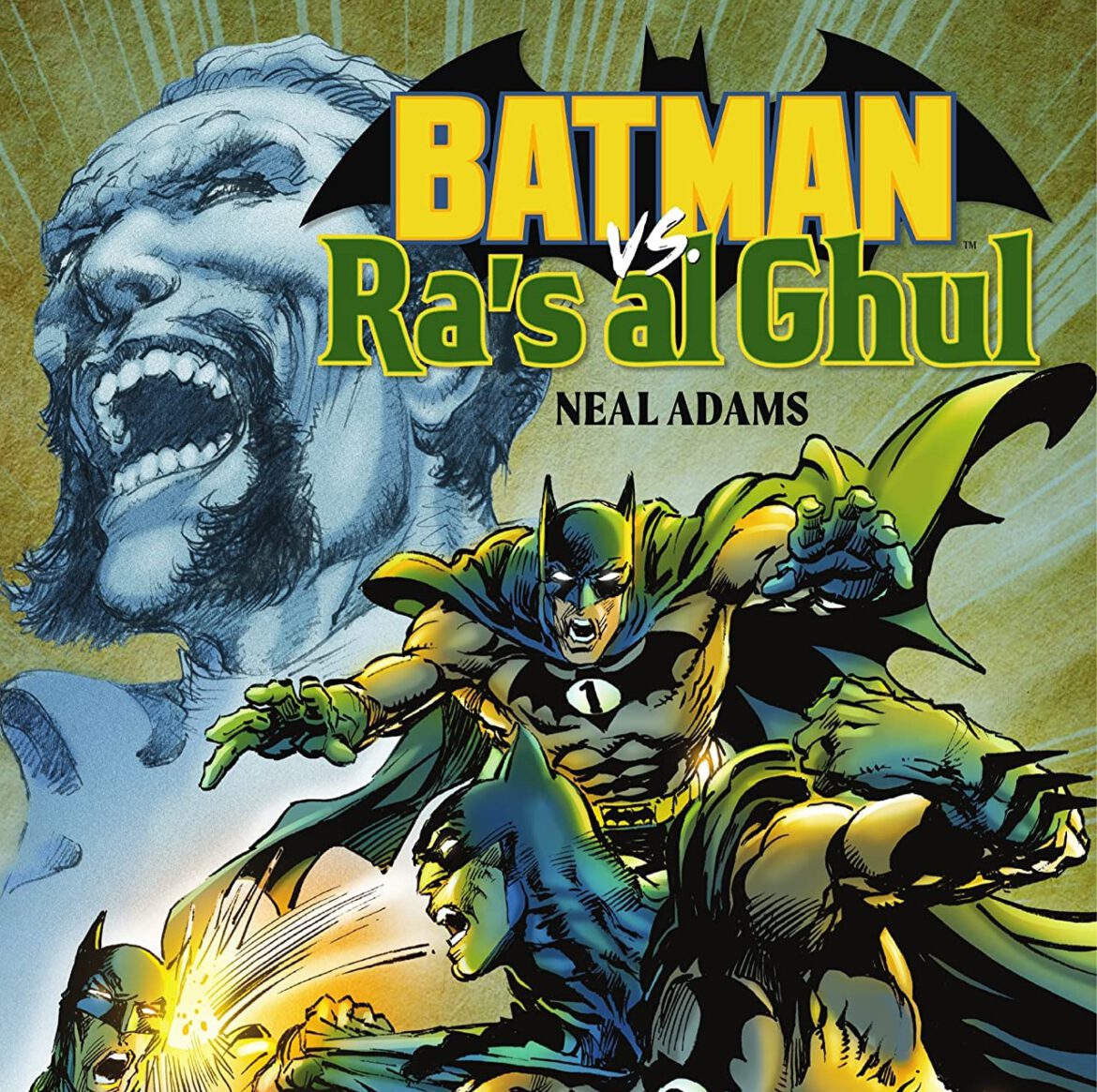 Overview:  In Batman vs Ra’s al Ghul, readers are treated to an out-of-continuity story that pits Batman against his old nemesis turned savior of Gotham, Ra’s al Ghul.

Editor’s Note: This collected edition includes all six issues of the miniseries Batman vs Ra’s al Ghul which had its first issue released in September 2019 and the final issue released in April 2021. This review focuses on the story as a whole rather than the individual issues that made up the limited series.

Synopsis (spoilers ahead): As Batman vs Ra’s al Ghul begins, there’s a man with a leash attached to a collar on his neck. On the other end of the leash is a dog with explosives strapped to him.  The pair is running, but Batman intervenes. Batman grabs the dog and removes the bomb vest from the dog, saving both. Batman runs off; his job is not done.

Elsewhere in Gotham, Deadman arrives as Batman continues to fight the terrorists. Batman finds a robot rallying the troops and attacks. Deadman takes over one of the escaped convicts, and he is ejected when the man dies from a bullet from one of Ra’s al Ghul’s men. Batman goes on a tirade accusing Ra’s, saying he is a liar and a murderer. Gordon tries to calm Batman down, but Batman and Deadman get back to fighting the terrorists and the escaped convicts. Deadman finds the controller of the robots. That robot explodes seemingly killing Batman. Nightwing and the two Robins arrive, and they are confronted by Bruce Wayne, a man that Tim Drake does not recognize.

Ra’s contacts his ally, Chiaroscuro.  She informs him that Batman is being taken care of.

In Wayne Manor, Tim and Dick try to get Bruce and Damian to remember that they are Batman and Robin. They try to show them the secret passages to the Batcave to no avail. The entrances are not there.  Bruce, Damian, and Alfred think that Dick and Tim have lost it, and to save face, the two leave only to be picked up by Man-Bat and “Woman-Bat” (Kirk and Francine Langstrom).  The two take Dick and Tim to the cave showing them that it still exists. The two find the entrances from the manor to be boarded up. Just then, Ubu arrives and attacks. Tim and Dick take the man out and open the entrance appearing to Bruce and Damian. It is revealed that Alfred is an imposter with the real Alfred taped up nearby. He escapes and attacks the imposter, revealing it to be a robot. Kirk and Francine revert to their human forms as Dick continues to try to convince Bruce that he is Batman. Ra’s arrives and is confronted by Kirk. Ra’s grabs Kirk’s throat, and Kirk changes into Man-Bat.

Tim Drake attacks the mad scientist that Deadman found. This scientist launches his robots, including a robot duplicate of Catwoman.  Tim and Dick battle through as Batman and Robin, with Dick dressed as Batman. Dick removes his Batman mask while Tim removes his Robin mask.

In another place, a hairy Batman is fighting savages. He is approached by Chiaroscuro. She tries to stop Bruce, but Batman puts on a partial mask.

In Gotham, Ra’s is being interviewed, His power plant is supplying Gotham with power when its grid went down.

Alfred examines Bruce for his scars, and he finds them while Damian’s memories are restored by Dick. Damian remembers that he is Robin. Bruce still does not remember that he is Batman.  Deadman arrives, but he is transported to where Chiaroscuro and the hairy Batman are. He discovers that in this realm, he is alive.  The three set off on a quest.

Some strange saloon scene plays out where a blonde warrior woman fights Chiaroscuro for one of the men. Chiaroscuro wins the confrontation. It is revealed that the woman is really Boston’s sister, and she is looking for her second brother, which Batman reveals is in Gotham. Another woman, a cat-like creature who becomes a guide, appears and joins the group.

In Gotham, Ra’s is attacked and seemingly killed, but two different Batmen arrive. One of the Batmen is Bruce and the other is a blond Scottish man who is captured by Bruce. After discovering that there is some kind of tournament that will determine who will be Batman, Bruce decides to go as the blond man.

This is witnessed by the four in the other dimension. The four fight some demon creatures, which leads them to Etrigan. Etrigan tells Boston that his brother is alive and is employed by Ra’s. This enrages Boston, who attacks Etrigan, striking fear in the Demon.

The Batman tournament commences with three finalists, and one of the finalists is Matches Malone. After revealing some shenanigans from the third finalist, Bruce and Matches are declared co-winners.

It is revealed that the blond man is actually Aaron Brand, the brother of Boston, and he is working for Ra’s to infiltrate the new group.

Batman and Chiaroscuro meet with Ra’s, and after a back and forth, Chiaroscuro slashes Ra’s with a sword. This is Deadman’s cue to leave with the Catwoman guide. Chiaroscuro reveals that this Ra’s is also a robot by ripping its head off. Nightwing and Robin bring in the evil scientist tied up.  This wraps up the story.

Analysis: Batman vs Ra’s al Ghul is a horrible story that makes absolutely no sense. This gist that I was able to put together is that Ra’s is trying to purchase half of Wayne Enterprises and then he was going to introduce a new method of generating electricity. To do this, he is shown as altruistic in giving Gotham electrical power through his plant when the electrical grid of Gotham goes down.  It is unclear when this takes place, there is a reference to the “Cataclysm” and “No Man’s Land” storylines, but both occur before Damian Wayne is even introduced.

The characterizations are all off. For example, Damian is not depicted as he usually is. He reminds me of Burt Ward’s portrayal of Dick Grayson in the 60’s Batman TV series, not the headstrong teenager that we read about in other stories. Batman is shown as very juvenile in his reaction to Ra’s in the beginning, and it really is unclear what happened in the first battle when Batman is seemingly killed. Did a part of Batman get separated from Bruce Wayne, and if so, when did they get back together?  The narrative is unclear about that.

If this is supposed to be a mystical tale, it falls flat. Deadman is extra baggage, and Etrigan is also characterized strangely. He is not his normal confidant Demon lord that rhymes. Here he just seems to be a coward, and he is afraid of Boston Brand. Chiaroscuro is interesting and her design is fun, but why is she here?

The art is serviceable but nothing to give a wow factor. The design of Damian Wayne is completely off.  He is drawn as a child in grade school while the others are drawn in their expected ages.

Editor’s Note: DC Comics provided TBU with copies of the original issues of this series as they released, but not of this new edition. You can find this collected edition and help support TBU in the process by purchasing this edition digitally either for Comixology through Amazon, or as a physical copy in a hardcover form at Amazon or from Things from Another World.

This is a confusing story that makes no sense and leaves a lot of questions and plotholes throughout. It is just bad.