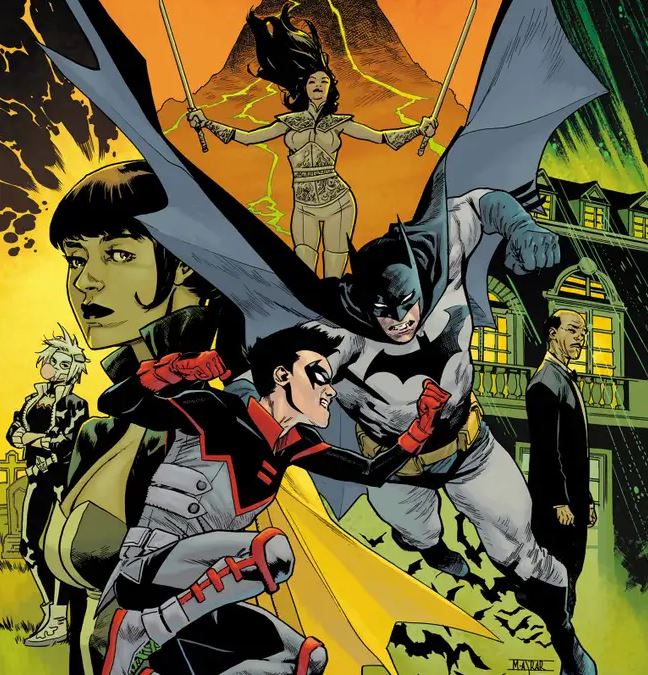 Overview: In Batman vs Robin #1, Batman discovers Alfred Pennyworth is alive. He is also attacked by Robin, who is under some sort of magic control.

Synopsis (spoilers ahead): Batman vs Robin #1 begins at Wayne Manor; it’s a dark and stormy night. A figure in a raincoat approaches.

Bruce Wayne is in the manor, having felt a compulsion to return. He looks at family memories, wondering what drew him here tonight. There’s a knock upon the door. Bruce answers it, and it’s Alfred Pennyworth, back from the dead.

Bruce runs through the gamut of who could be pretending to be Alfred. Alfred tells Bruce the last thing he remembers, which was of Damian being held captive by Bane and Flashpoint Batman (in the City of Bane storyline).

For the next hour, Bruce quizzes Alfred. Alfred passes, then suggests Bruce examine him medically in the Batcave. As they descend, Bruce feels uneasy. There’s something down there that’s pulling him.

In the Batcave, Bruce is confronted by Robin (Damian Wayne). Robin hasn’t seen Alfred yet, so Bruce whispers for Alfred to hide.

Robin and his cohorts, Tim Hunter and Jakeem Thunder, attack Bruce. Bruce quickly changes into Batman and engages the teens, realizing that someone has taken control over Damian.

Batman takes down Tim and Jakeem. He’s about to lose to Robin when Alfred makes an appeal. The distraction works, and Batman fights off the magic that Robin is wielding.

Batman and Alfred flee into one of the smaller cave systems. They almost make it when Robin catches up with them. Robin raises a gun and shoots at Batman, causing both the Dark Knight and Alfred to fall. Luckily, they fall into the dock for the Batboat.

Batman and Alfred ride out safely. The two bicker about Alfred’s safety, with Alfred wanting to help Damian and Batman pushing back. After arguing, they embrace. They’re all family, and family sticks together.

Robin returns to the Tower of Fate in Salem, where a mysterious figure tells him that he failed. When Robin says that this figure shouldn’t have given him children as an army, the voice tells him that a good carpenter doesn’t blame his tools. Then, this voice offers other artifacts in the tower in hopes that Robin will use them to get revenge on the voice’s jailer, meaning Batman.

Batman and Alfred go over the tools they have left. They plan to work off-grid, as their comms may be compromised. Batman pulls out a magic key that opens a portal to Zatanna’s home. The two enter, finding her hanging by Schrodinger’s Noose. She’s not dead yet, nor wholly alive.

Zatanna tells Batman and Alfred that magic users are being punished by this new evil. She says that Damian tainted magic and that Batman and Alfred must find out how. When they use the key again, they’ll be taken to a new place where they will learn what Damian did.

Back at the Tower of Fate, Robin asks for more than trinkets. He says that he is owed greater power, as he was the one who introduced Mother Soul to Devil Nezha (the villain from the most recent World’s Finest arc).

Analysis: Batman vs. Robin #1 is a weird book. It’s probably not what readers expected, leaning heavily on magic and manipulation as its setup. Despite being cremated, Alfred Pennyworth is alive once more, and undefined magic is to blame. The same excuse is used for Robin, who is under some sort of spell from the combined might of Mother Soul and Devil Nezha.

For those who aren’t big on magic in the DC Universe, this initial issue is quite the ask. Readers have to be on board with the idea that we get very few answers in this issue. We know who is behind everything, but we don’t know how. We also don’t know why Alfred is alive, but a good guess would be that it’s some sort of wish fulfillment/motivator for Robin, despite Robin readying himself to stab Alfred early in the issue.

What this issue does well is set the parameters for Batman and Alfred going forward. After the assault in the Batcave, Batman has limited gadgets and access to tech. It also shows how powerful and relentless Robin is, who goes so far as to shoot his father with a gun. Clearly, this isn’t the Damian readers remember from the most recent Robin series.

The rest of the issue is dicey. Though the return of Alfred in the opening pages has its moments, this book quickly spirals into one overly long battle that’s more jarring than anything. There’s no real tension or weight to the battle. It’s a surprise attack by Robin and a couple of other kids, and that’s about it.

The art is pretty, particularly the coloring by Jordie Bellaire, but there’s very little tension. It feels like we’re reading this at a distance, disjointed and out of sync with the action.

Batman vs Robin #1 is an interesting start that promises a globe-trotting adventure with Batman and Alfred on the run from Robin, Mother Soul, and Devil Nezha.