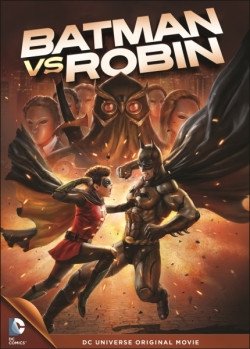 The voice cast to DC’s next animated film Batman vs Robin has been revealed. The Hollywood Reporter is reporting that the follow up to last years Son of Batman will feature Jason O’Mara reprising his role as the caped crusader as well as Stuart Allan, Sean Maher, and David McCallum returning as Damian, Dick Grayson, and Alfred, respectively.

Plot details are sparse but after months of speculation it has been confirmed that Batman vs Robin will be based Scott Snyder and Greg Capullo’s Court of Owls storyline in some capacity. Actor Jeremy Sisto (Clueless, Suburgatory) will play Talon who will be making his first appearance outside of the comics.

It also worth noting that beloved DC staple Kevin Conroy is also listed as the voice of Thomas Wayne. And in a uhh…weird bit of casting news comedic recording artist the “Weird Al” Yankovic will be playing the Dollmaker, though it is not specified which iteration.

The film will debut at WonderCon in Anaheim this April and will be available for purchase on BluRay, DVD, and Digital Download sometime during the spring.

What do you think of the casting news?  Are you happy to see O’Mara reprising his role as Batman? Is it sacrilege to have a Kevin Conroy in an animated Batman movie but not have him playing the Dark Knight?  Do you think that Weird Al can playing a convincing villain/skin thief/weirdo? Let us know in the comments below.