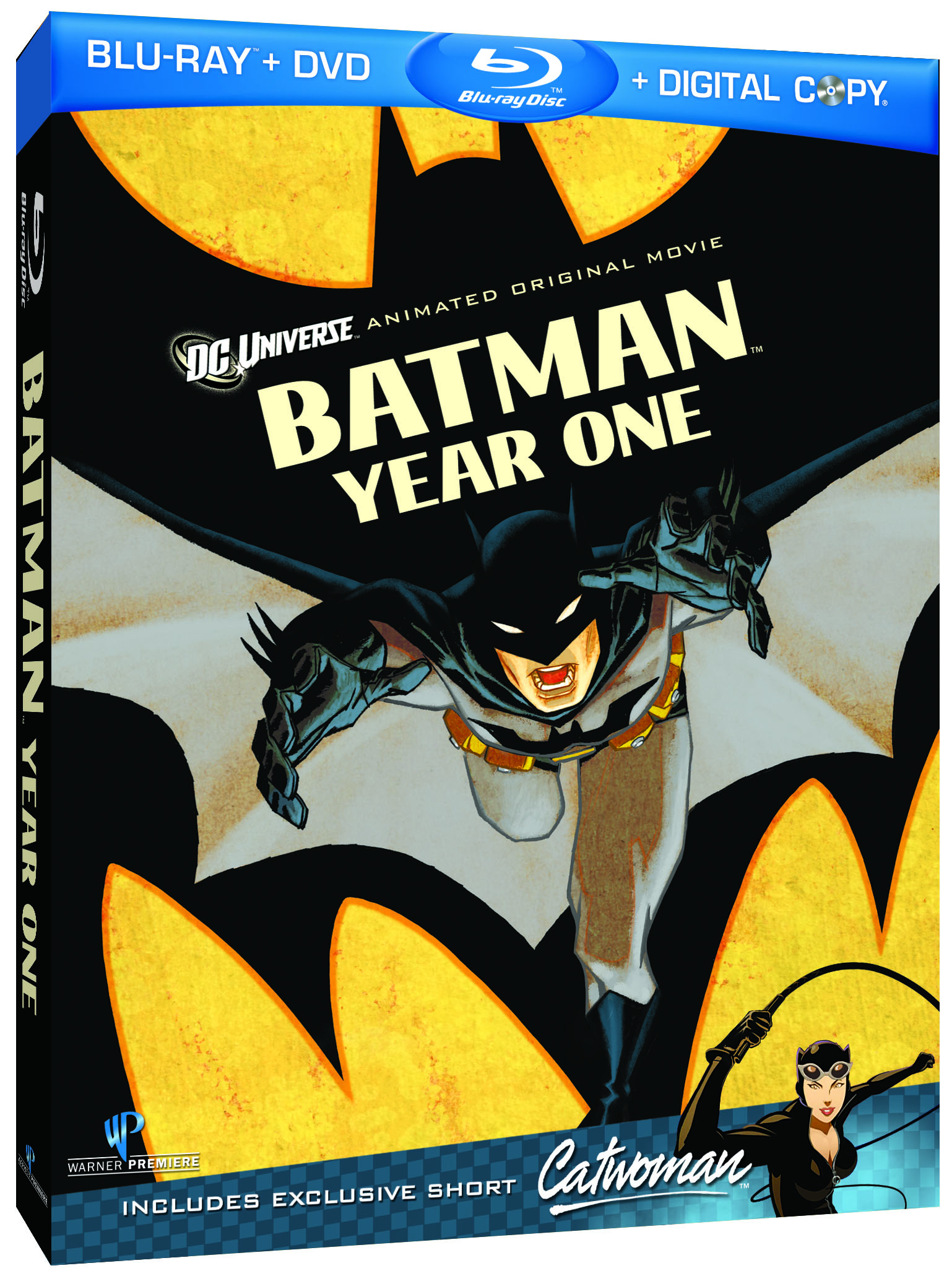 Batman: Year One is based on the landmark 1987 DC Comics titles from 12-time Eisner Award winner Frank Miller and illustrator David Mazzucchelli. The film depicts young Bruce Wayne’s return to Gotham City in his first attempts to fight injustice as a costumed vigilante. The playboy billionaire chooses the guise of a giant bat to combat crime, creates an early bond with a young Lieutenant James Gordon (who is already battling corruption from inside the police department), inadvertently plays a role in the birth of Catwoman, and helps to bring down a crooked political system that infests Gotham.

Batman: Year One Blu-ray™ Combo Pack has almost 3 hours of exciting content, including:

• Feature film
• Sneak Peek at Justice League: Doom, the next DC Universe Animated Original Movie
• DC Showcase Animated Original Short – “Catwoman”: This all-new entry to the growing canon of DC Universe animated shorts features the first first solo tale centered around Catwoman. The felonious feline’s adventure takes her through the seedy streets of Gotham City. Catwoman is voiced by Eliza Dushku (Dollhouse, Tru Calling).
• Featurette –“Heart of Vengeance: Returning Batman to His Roots”: “The Dark Knight Returns” provided the denouement of Batman's life. Frank Miller's next seminal work would provide his near-mythic origin in “Batman: Year One.” This documentary uncovers the contemporary genius of Miller and the audience that was poised to appreciate the depths of his work.
• Featurette –“Conversations with DC Comics”: The Batman creative team at DC Entertainment discusses the personal influence of “Batman: Year One” on their careers. Batman producer Michael Uslan leads the chat amongst well-known writers, editors and artists of the Batman lore, focusing their dialogue on the darker, realistic interpretation of Batman’s origins by Frank Miller and David Mazzucchelli
• Audio Commentary with Alan Burnett, Sam Liu, Mike Carlin and Andrea Romano
• “Batman: Year One, Chapter 1” Digital Comic Book
• Two bonus episodes from “Batman: The Animated Series,” handpicked by Bruce Timm
• Standard and high definition versions of the feature film
• Digital copy on disc of the feature film compatible with iTunes and Windows

About Warner Premiere:
Warner Premiere, part of Warner Bros. Entertainment, specializes in the development and production of both features and digital content for home entertainment platforms. Past projects include Another Cinderella Story, Scooby-Doo! The Mystery Begins and Batman: Under the Red Hood, as well as the digital series Watchmen Motion Comics. Warner Premiere is at the creative forefront in the made-for-home entertainment marketplace, producing properties that exemplify the commitment to story, production and brand equity for which Warner Bros. is known.

About DC Entertainment:
DC Entertainment, home to such iconic DC Comics properties as Superman, Batman, Green Lantern, Wonder Woman, Flash, MAD Magazine, and Fables, is the creative division charged with strategically integrating across Warner Bros. and Time Warner. DC Entertainment works in concert with many key Warner Bros. divisions to unleash its superheroic characters across all media, including but not limited to film, television, consumer products, home entertainment, and interactive games. Publishing over 1,000 comic books, graphic novels and magazines each year, DC Comics is the largest English-language publisher of comics in the world.

About Warner Bros. Animation:
Warner Bros. Animation (WBA) is one of the leading producers of animation in the entertainment industry, with an innovative and talent-rich roster boasting some of the most accomplished writers, producers and artists working today. The studio is on the cutting edge of animation technology, and has both CG and traditionally animated projects in current production and development. In 2010, WBA unveiled three new CG cartoon shorts that feature iconic Looney Tunes characters Wile E. Coyote and Road Runner, rendered in stereoscopic 3D. The films have been released theatrically, attached to Warner Bros. Pictures releases. For television, WBA currently produces Batman: The Brave and the Bold, The Looney Tunes Show, Scooby-Doo! Mystery Incorporated, MAD and Young Justice for Cartoon Network, and will soon launch ThunderCats, Green Lantern: The Animated Series and more. WBA also creates the highly successful series of DC Universe Original Animated Movies for DVD. Producing for multiple platforms including TV, digital and home entertainment both domestically and internationally, WBA is highly respected for its creative and technical excellence, as well as for maintaining the Studio’s rich cartoon heritage. It is also the home of the iconic animated characters from the DC Comics, Hanna-Barbera, MGM and Looney Tunes libraries. One of the most-honored animation studios in history, WBA has been honored with six Academy Awards®, 35 Emmy® Awards, the George Foster Peabody Award, an Environmental Media Award, a Parents’ Choice Award, the HUMANITAS Prize, two Prism Awards and 20 Annie Awards (honoring excellence in animation).