Review: Batman and Superman: Battle of the Super Sons 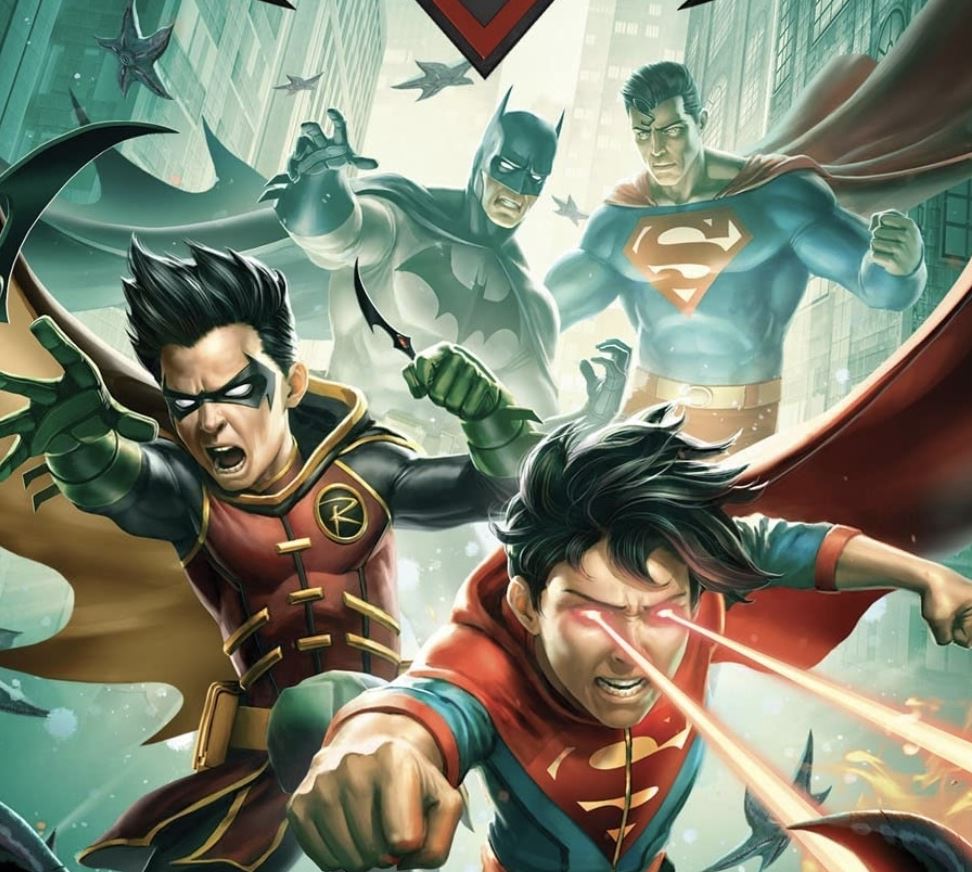 Overview: In Batman and Superman: Battle of the Super Sons, the future of the DC Universe takes center stage as Jon Kent and Damian Wayne unite to free the world from an invasion from Starro.

Synopsis (spoilers ahead): Battle of the Super Sons opens up with a familiar scene – Jor-El and Lara putting baby Kal-El in the rocket before Krypton explodes. As the ship starts to take off, a Starro starfish attaches itself to the ship. That leads us to a beautiful comic book panel-type opening of Clark Kent’s history as Superman leading to the birth of his and Lois’ son, Jon Kent.

The Kents live in Smallville, and it is almost Jon’s birthday. After being told by Lois not to look for birthday presents while she’s gone, Jon does anyway. His father returns home before he finds anything, and they do some chores around the farm. Jon asks his father about his job and why he has to be gone a lot of the time. Clark tells him that his job as a reporter is important (Jon doesn’t know that Clark is Superman yet), but Jon is the most important thing in his life. While this is happening, Clark sees the JLA Watchtower falling from orbit, quickly makes an excuse, and goes to save it. Green Arrow is the only one on board, and after Superman leaves, Arrow is attacked by an unknown being.

The next day, Jon has a big baseball game and strikes out after noticing his father is not there. Jon is upset, and when Clark tries to talk to him, Jon runs off. While running away, Jon’s heat vision kicks in, and Clark and Lois finally tell Jon the truth. Jon is beyond excited, and Superman and Jon fly to Gotham City for some tests. While there, Jon meets Batman and Robin. Damian Wayne is classic Damian and is rude and teases Jon. After bringing Jon back home, Superman heads with Batman to check on the Watchtower, where they are attacked by a Starro-controlled Martian Manhunter.

Back in the Batcave, Damian is attacked by a Starro-controlled Batman. Damian is able to escape but notices that they are going to go after Jon next. Damian heads to Smallville Junior High, and they are attacked by a Starro-controlled Lois. Jon uses his heat vision on the Starro, and it frees Lois from it unbeknownst to the boys. The boys then head to Superman’s Fortress of Solitude to test a piece of the alien that Damian was able to get. There, they meet an artificial intelligence version of Jor-El, who tells them that Starro has a hivemind and that there must be a main Starro somewhere. The boys figure out that it must be on the Watchtower.

The boys cram in baby Kal-El’s spaceship and head to the Watchtower, where they are confronted by Starro-controlled Justice League members and Teen Titans, as well as the main Starro. The boys are able to defeat the Justice League and Titans, and while searching for Starro, they come across Starro Batman and Superman. Damian uses a Kryptonite ring to beat Superman, while Jon is able to take down Batman. The boys also figure out that the Starro is vulnerable to heat and fire. The big Starro is too much for the boys to handle, so they decide that the only way to beat him is to drop the Watchtower from orbit. Damian and Jon load Batman, Superman, and the rest of the heroes onto ships to safety. They start to drop the satellite down and talk about the sacrifice that heroes have to make. They hope that they made their fathers proud.

Batman and Superman shake loose the mind control and realize that the boys are still on the Watchtower. Superman quickly flies and brings the tower down safely. Starro is still alive, and Superman and Jon play a quick game of baseball as Jon knocks it out of the park and finishes off Starro once and for all.

Damian goes to see Jon’s baseball game as the film ends with the boys watching a Smallville sunset and ready to accept the legacy as the Super Sons of the World’s Finest.

Analysis: This movie was awesome. It had a great, quick-moving plot that was filled with action, heart, and humor. The movie is only a little over an hour long, but it is able to pack in so many fun things.

I was a little nervous about how the animation would be because I am not a big fan of CG animation, but for this story, it worked. This type of animation was perfect for the story of two kids trying to live in the legacy of their legendary fathers.

Jack Dylan Grazer, best known as Freddy Freeman from Shazam!, was great as Jon Kent. He played the excitable, naïve kid who just found out he’s the son of the Earth’s greatest hero and is learning about his powers on the fly. On the flip side, Jack Griffo perfectly played the arrogant, cocky, smug Damian Wayne. It’s tough to play Damian and make him likable, and I thought Griffo succeeded in that.

I hope this movie does well because I would like it to get a sequel and see these characters continue to grow. For those missing the Jon/Damian friendship in the comics, this movie is for you.

Editor’s Note: Batman and Superman: Battle of the Super Sons is now available on Digital HD, Blu-ray, and 4K Ultra HD. You can order your copy and help support TBU in the process by heading over to Amazon.

Batman and Superman: Battle of the Super Sons

This action-packed adventure is perfect for fans of classic Damian and Jon Super Sons adventures!