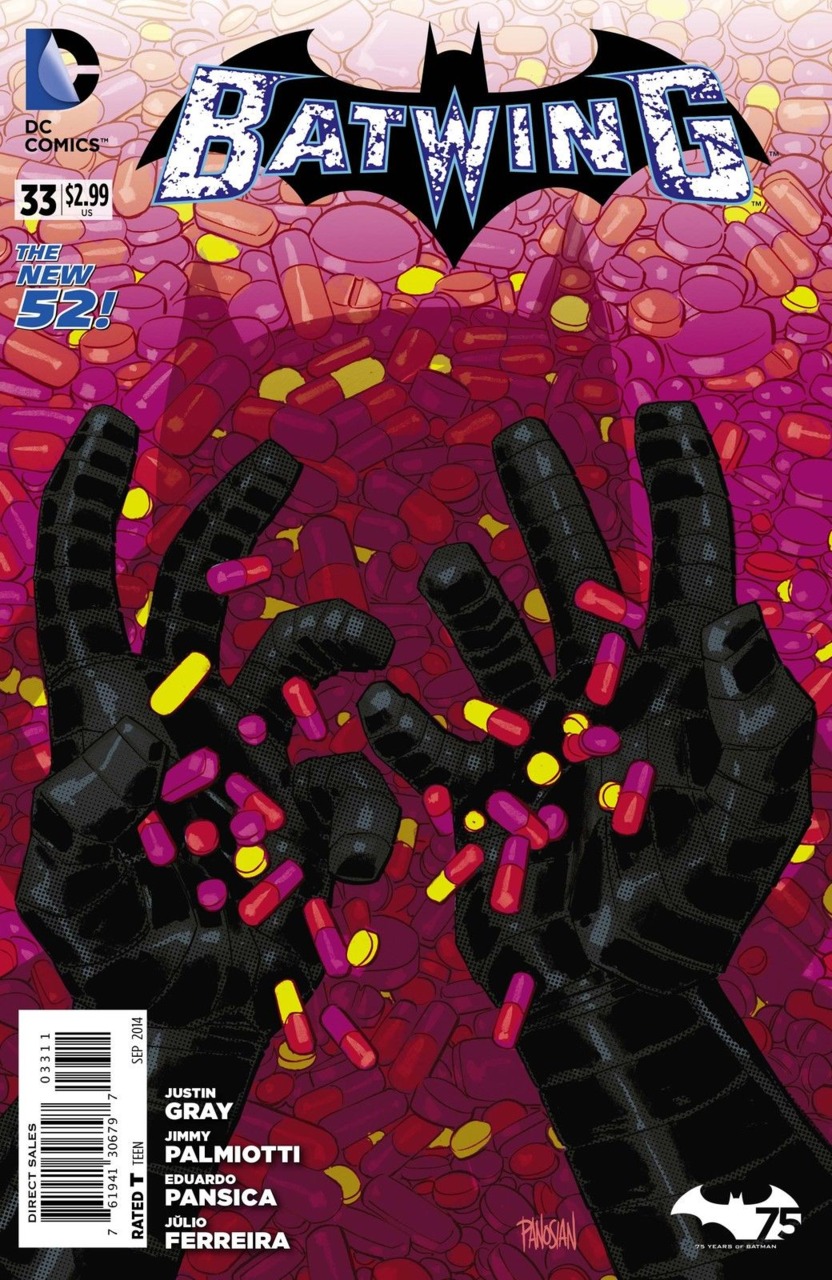 This is my first time ever reading a Batwing book, and I have to say, if I read an issue sooner, I would actually be upset that this was ending. It's a pretty good book. It blew away my expectations. Gray & Palmiotti write a great and likable Luke Fox… Lucius and the rest if the Fox family, not so much. They tend to come off as jerks. But here, with this being the second to last issue, we get an origin story. For the villain… Seems kinda weird to do this with such a short period of time left, I hope proper due is given to Batwing since this is HIS book.

The art team is great. They do a solid job, however, they lack the flair most notable art teams have. If they can do something special, and memorable, I'm thinking it could do wonders for them. The cover is neat looking. Really setting itself apart, and standing out from the shelf. However, I don't know what pills necessarily have to do with the story. They kind of tie-in, but it's pretty vague.

We see some bums camping out under a bridge, when one begins to share a story of a man. That's right. We get the origin story of Gruesome George. Man, this is one messed up dude. He had an awful childhood, and ended up getting a sick kick out of extreme violence. He loved fighting. He loved jail… But he hated Arkham, because he was locked in solitary confinement. No one to fight there. He heard of Batman, and broke out.

So when he gets out, he does what any of us would do. He becomes a Batman wannabe. Beating up gangs, and leaving them to the police. Batwing uses his detective vision, and follows a blood trail, as Gruesome George has been shot. It leads him to a factory, where he meets George. They have a great conversation, which makes me think of Luke as DC's Peter Parker.

Luke tries to talk to George, obviously knowing he has mental problems. Tries to coax him into going back to Arkham. George mentions some "children" in the factory. And Luke gets worried. When he looks around for them, George attacks him from behind, leading them down the stairs, but George gets hurt, and faints. Luke takes him outside, calling in the police, and forgetting the children. Thinking that George must be crazy, and making stuff up, and Luke leaves. When the ambulance and police arrive, they are attacked by some mysterious creatures and are killed. With the reveal, I still have no idea what these things are, but I don't want to run across one ever.

The moment where Luke is trying to talk to George, and coax him into going with him is the absolute best part of this comic. Really humanizing our main character, and making him relatable.