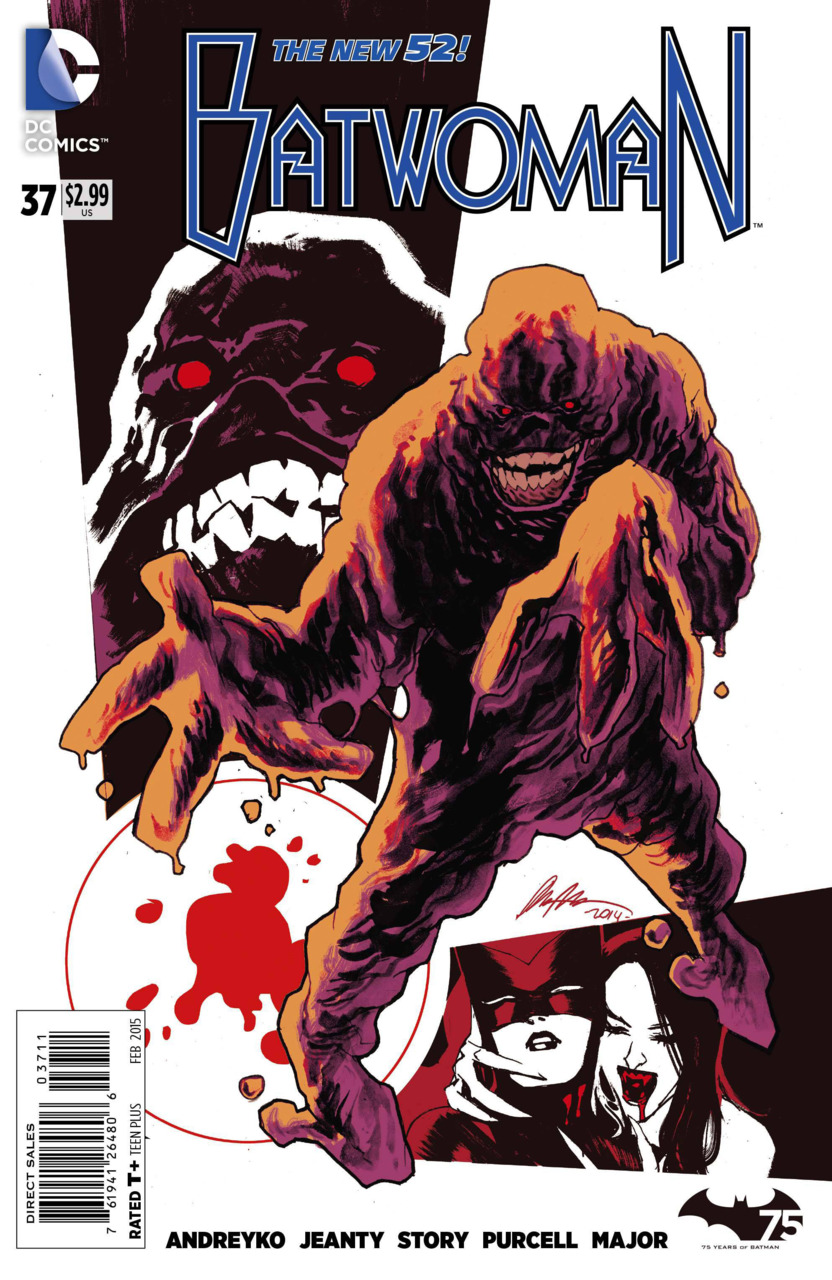 This issue opens with Batwoman interrupting Etrigan holding a naked Jason Blood in his apartment. We quickly flashback to 15 minutes before as we see Batwoman enter an unknown woman’s apartment and threaten her to end her vendetta against Natalia (Nocturna), but an explosion draws her away. We then see Etrigan trying to capture Jason Blood, and rhyming why he is after him…it seems that Etrigan knows of the bond between the two of them, while Blood does not. Batwoman then shows up, which brings us back to the opening of the issue.

We then cut across town to see several individuals breaking into the pawn shop run by Rory Regan where we see the weird medallion getting sold last issue. The thieves break into the store and start to crack open the safe in order to acquire the medallion…we then see Rory getting awoken by the noises below in his shop and dons his “costume” as Ragman.

Cutting back the battle between Etrigan and Batwoman, the two fight to a standstill when Batwoman wonders aloud if Etrigan has any connection the robed cultists from last issue…being as they both have connections to magic. Etrigan informs Batwoman that he knows who she is talking about and lets her know that they are a group that are attempting to resurrect Morgan Le Fay.

We then cut over to the Gotham train station where we see a disguised Clayface attempting to make his way out of Gotham. However a van quickly pulls up and orders Clayface to come with them and says “you have people who need your services.” Clayface agrees as it’s easier to escape with them then on his own. However once inside, the drivers quickly gas Clayface which freezes him to the spot. We then see a quick page of Alice walking through the Kane Estate and remembering some of her childhood moments with her sister.

Out on the rooftops, Etrigan and Batwoman are attempting to locate the cult and Etrigan comments that evil is everywhere in Gotham…even within Kate herself. He mentions that she “stinks” of evil and suddenly we see the psychic connection between Kate and Nocturna broken…Nocturna even wonders aloud how this could have happened. Etrigan then spots the location they need and swing off into the night…Batwoman silently thinks that she should meet up with Zatanna and figure out what Etrigan really meant by the darkness growing within her. The issue then closes out with the robbers entering a building with the other cultists and placing the medallion around Clayface’s neck…then some magic happens and a reborn Morgan Le Fay emerges from the clay.

Well this was definitely better than what we’ve been seeing…but still nothing compared to what we had under the direction of JH Williams and W Haden Blackman. I like that we get some answers this issue regarding who the weird cult guys are and what their end goal is. Clearly last issue was them attempting to bring back Le Fay with some random person…and it didn’t work. However, I’m a little confused as to why Clayface was the answer they were looking for…really hoping this gets answered quickly next month.

Their also seems to be some quick solutions thrown about in this issue – the connection between Nocturna and Kate is mysteriously broken when Etrigan sniffs her and mentions her stench of evil. How was this broken? And what exactly is Nocturna’s goal with seducing and controlling Batwoman?

Then we get to Clayface and Ragman…what is the point of them being in this story? Ragman makes about a half page appearance total, with the thieves somehow escaping from him with the medallion. Then you have Clayface who is trying to escape Gotham…wearing a trench coat and fedora over his clay body. Why isn’t he transforming into someone? That would probably make escaping so much easier!

Unfortunately it seems that our creative team is really trying to force these characters together…Batwoman and Etrigan stop their fight simply because Etrigan mentions he knows about the cultists, Ragman is simply making a cameo appearance and Clayface has been frozen and turned into another villain. And somehow this ends up with all of them in spacesuits fighting in the upper atmosphere.

Overall, as I stated earlier this is better…but definitely not awesome. And it’s no surprise (at least from me) that this series is getting cancelled after this story arc.