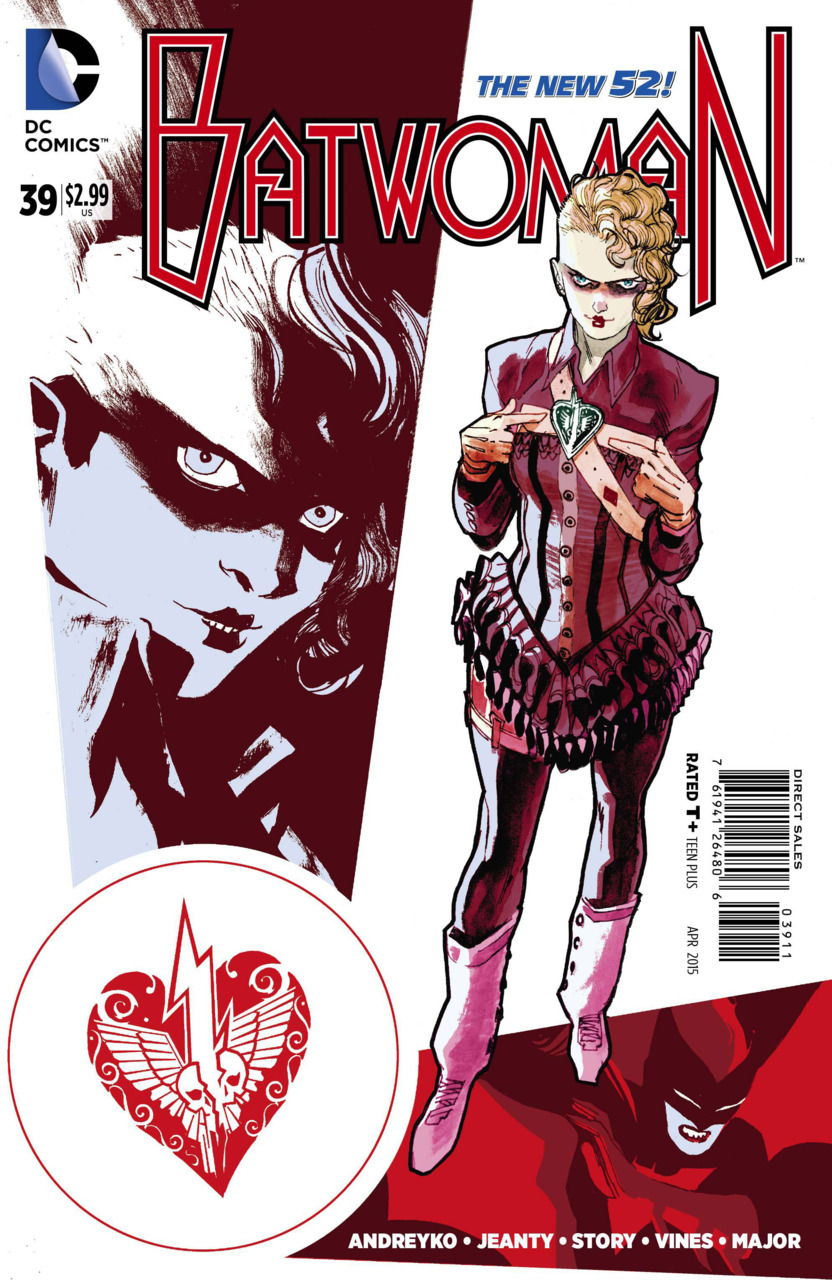 Batwoman #39 begins right where #38 left off with Kate being face to face with her sister Beth. Kate is overjoyed to see her sister and gives her a hug. Beth sees a bottle on the table and immediately wants a drink. Natalia shows up smiling and asks for an introduction especially since the bottle belongs to her. After small talk concerning Beth’s apparent breakthrough, Natalia leaves for more wine. Beth questions Natalia’s presence and what happened with Maggie. Beth makes a comment about Kate having a weak spot for “strays” which Natalia overhears. This starts a fight between Beth and Natalia with Kate stuck in the middle. Just before Kate can end this argument, Beth makes an interesting “Nocturna” reference, giving me the idea that she knows that the big bad from the last arc just prior to the Future’s End issue is Natalia. It makes me wonder what else Beth knows, does she know that Batwoman was bit by Nocturna. After Kate walks off there is a whispered exchange between Beth and Natalia that I find interesting. Beth says that she is on to Natalia. Where will this lead to, and I hope it is soon since next month is the last issue of this series.

We move to Clayface and Rory where Clay learns who he is and what he has done in the past. Rory tries to calm Clay down. In attempting to reassure Clayface, Rory burns his hand on Clay’s skin, giving Clay the idea he is genetically evil. Rory says that if he was evil, he would “face justice at Ragman’s hand” while he transforms into Ragman.

The caption later in Kate’s apartment, Kate returns to ask if everything is good, after which Natalia and Beth respond with “absolutely” Kate satisfied prepares to go out on patrol and asks Beth or “Red Alice” if she will go with them and maybe they can catch up on the last few months. Alice agrees and as she suits up, Natalia asks for Kate’s forgiveness for arguing with Beth after which they kiss, it is interesting to note that we see Natalia’s eyes are open.

We cut to a street where we see two men; one named Jason the other Radhu. Jason is dropped off home and as he enters his apartment, he comes face to face with Morgan Le Fey standing over a magically bound Etrigan.

Back at Kate’s apartment Maggie Sawyer and a uniformed police officer arrive to inform Natalia that her step daughter, Alex was “butchered” and Natalia looks surprised.

We cut back to Batwoman and Red Alice’s patrol where they discus Alice’s recovery and she expresses a desire to make this life of patrol a little more permanent. Just then Batwoman receives a call from Ragman who requests her help.

Back to Jason’s apartment Morgan first seeks to probe Jason’s mind for something but instead, she spots what she is looking for hidden in plain sight, a glowing green rock, no it is not kryptonite. She tosses Jason aside and grabs the rock. Just then Batwoman and Alice join Ragman and Clayface. After a brief introduction and exchange between Alice and Ragman, Batwoman spots Etrigan in the apartment. Morgan tosses Jason through the wall and Alice jumps to catch him. As this occurs, Batwoman leaps into the apartment musing that she never thought that she would be fighting crime with her sister or “whatever the hell this is”. All the allies jump in to take Morgan down to little affect Morgan easily escapes further damaging the wall to Jason’s apartment. The heroes lick their wounds and move in to free Etrigan, which by disturbing the magic pentagram on the floor Etrigan easily frees himself. Etrigan explains that by getting the stone Jason had in his apartment, Morgan has become the avatar of death. Jason disappears from the apartment before Batwoman can find out why he had the rock in the first place. Etrigan is not interested in Jason; he wants to find out what her plan is or the “entire world shall bleed”.

Morgan arrives in Slaughter Swamp where she raises her army of the dead. To be continued.

This was a mixed bag book for me. I am weary of the Natalia and Kate relationship, I am still looking for a resolution to the Batwoman as a vampire subplot and how are we supposed to get into space where the first issue of this arc started. We only have one issue of this series left and I see a lot of loose threads to tie up.

I am happy to see a less insane side of Beth and it is good to see her patrolling the city with her sister. Now that we have the team together let’s see where the next issue goes. I am hopeful for a satisfactory ending to this series but I see a lot still needs to be covered. It started slow but the mini battle in the end gave this issue action and we have a cliffhanger that makes me want to see the next issue.