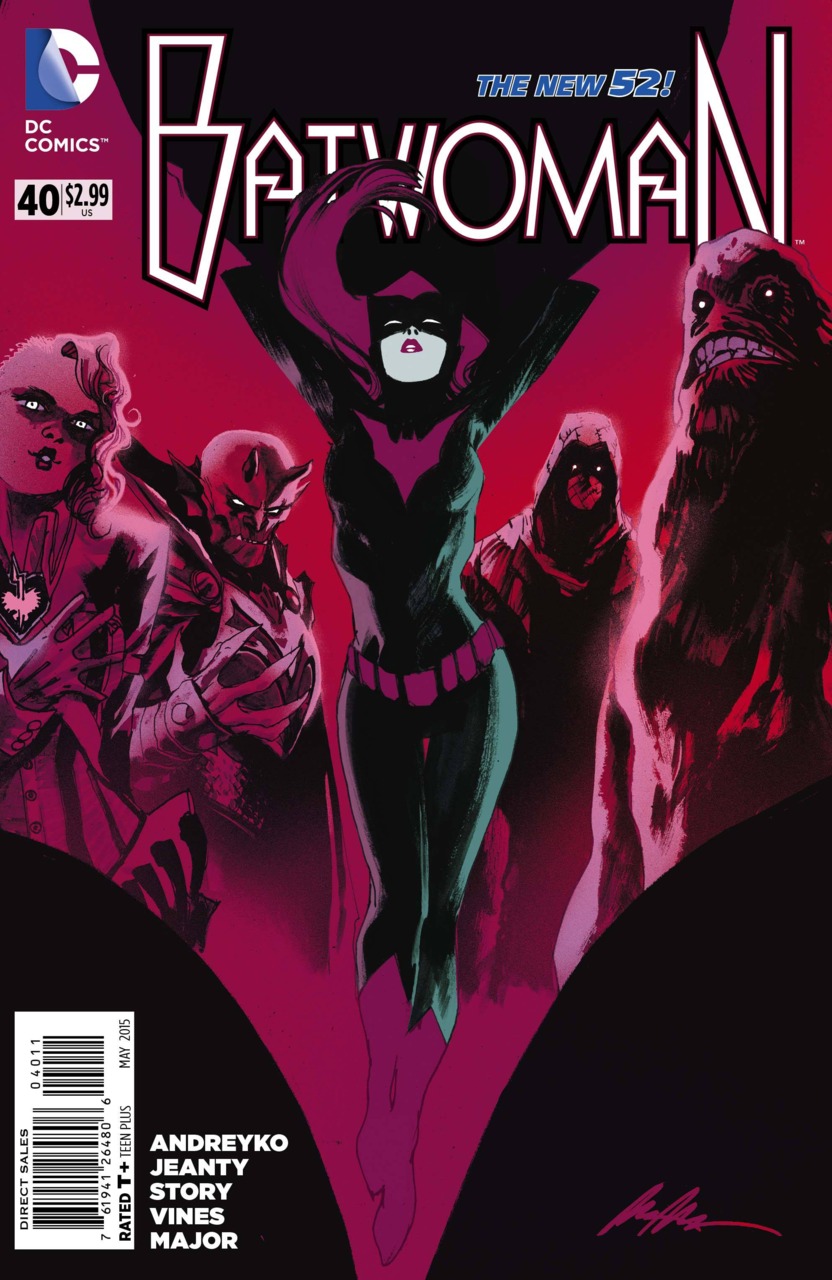 Batwoman #40, titled Nocturne in Red, opens up with Batwoman coordinating a search of Morgaine Le Fay by Etrigan, Ragman and Clayface with Red Alice at her side. Coincidentally Batwoman and Red Alice view a crime scene where a murder victim is loaded into an ambulance. Batwoman pulls her phone to see if Morgaine could be involved in this killing when she learns that the victim is Alexandra Witherspoon who is the stepdaughter of Natalia Mitternacht. Alexandra was accusing Natalia of the murder of her father. Batwoman leaves Alice. Kate flashbacks to the death of Alexandra when she realizes that she killed her in one of her “vampire” trances.

We cut to Slaughter Swamp where Morgaine still holding the glowing green rock she used to raise her army sits on a “throne” amongst her new army. Morgaine reveals that her goal is to “bring about a new Avalon. In order to do this, she needs a vantage point to unleash her evolution, she does not know where. One of the resurrected demons has an idea and points to the moon.

In Natalia’s apartment, we see Natalia drinking what I will guess is a glass of wine in front of the fire. Batwoman appears behind her with the news of Alex’s death. Natalia reveals that Batwoman did kill Alex for her and produces Batwoman’s blood soaked gloves as proof of Kate’s involvement in the death of Alex. After a conversation where Natalia accepts and thanks Kate for the death of Alex, Alice shows up to confront Nocturna. Natalia tries to coax Batwoman to attack Beth. With a command, she unleashes to “vampire” trance in Kate and she lunges at Beth. Beth fights back only to receive a headbutt from Batwoman that draws blood. After an exchange of batarangs, Kate is wounded in the arm. Beth explains that Kate is not really a vampire; otherwise she would not be bleeding from her wound. Natalia orders Kate to kill Beth when Beth pulls the collar of her tunic down to reveal her neck with the invitation to bite her.

We cut to outside Gotham where a security guard is making his rounds in a S.T.A.R. Labs compound when he stumbles upon Morgaine and her army who immediately attacks the guard.

Back at Natalia’s apartment Batwoman fails to bite Beth and Natalia realizes her hold on Batwoman is broken. Natalia tries to run away when Beth stops her and pushes her into a wall with the statement about her hypnotizing her victims. This is the first time that Batwoman realizes that she is not a vampire; she was hypnotized to think she was. Beth explains that Kate is not a killer; in fact she calls herself the only killer in the family. Kate realizes that Natalia never loved her, she was only using her. Beth punches Natalia in the face with an absolute look of evil glee on her face. Beth also reveals that she taped Natalia’s confession to murder as Batwoman leaves to get air. Beth joins Kate with the statement that the Gotham Police are on route to the apartment to arrest Natalia for Alex’s murder.

We return to S.T.A.R. Labs where the scientists are forced to activate what might be a transport beam to a satellite.

The rest of Batwoman’s team are still looking for Morgaine without any luck when Clayface sees the transport beam approaching the moon. Etrigan rhymes that they need Batwoman which Ragman responds by teleporting to her location.

Kate and Beth are on the rooftops discussing the recent revelations of Natalia. Batwoman doubts herself while Beth consoles her for giving good advice but not following it. They hug just as Ragman appears and transports them all to join Clayface and Etrigan at a shuttle launch pad. This story will be concluded in Batwoman Annual #2.

I am relieved to learn that this story will be concluded not here in this issue but in an annual. As I said last month, I was afraid there was not enough time to wrap up all the threads that were left open at the end of #39.

I liked the focus of this issue to be on the Nocturna vampire subplot with just enough Morgaine action to move that story along to the eventual space confrontation we saw when this arc started.

This was not an action focused issue and that was okay. I liked the character development and fleshing out the relationship of Beth and Kate. I am happy that Kate was not turned into a vampire as was suggested earlier but was in fact hypnotized by Nocturna.