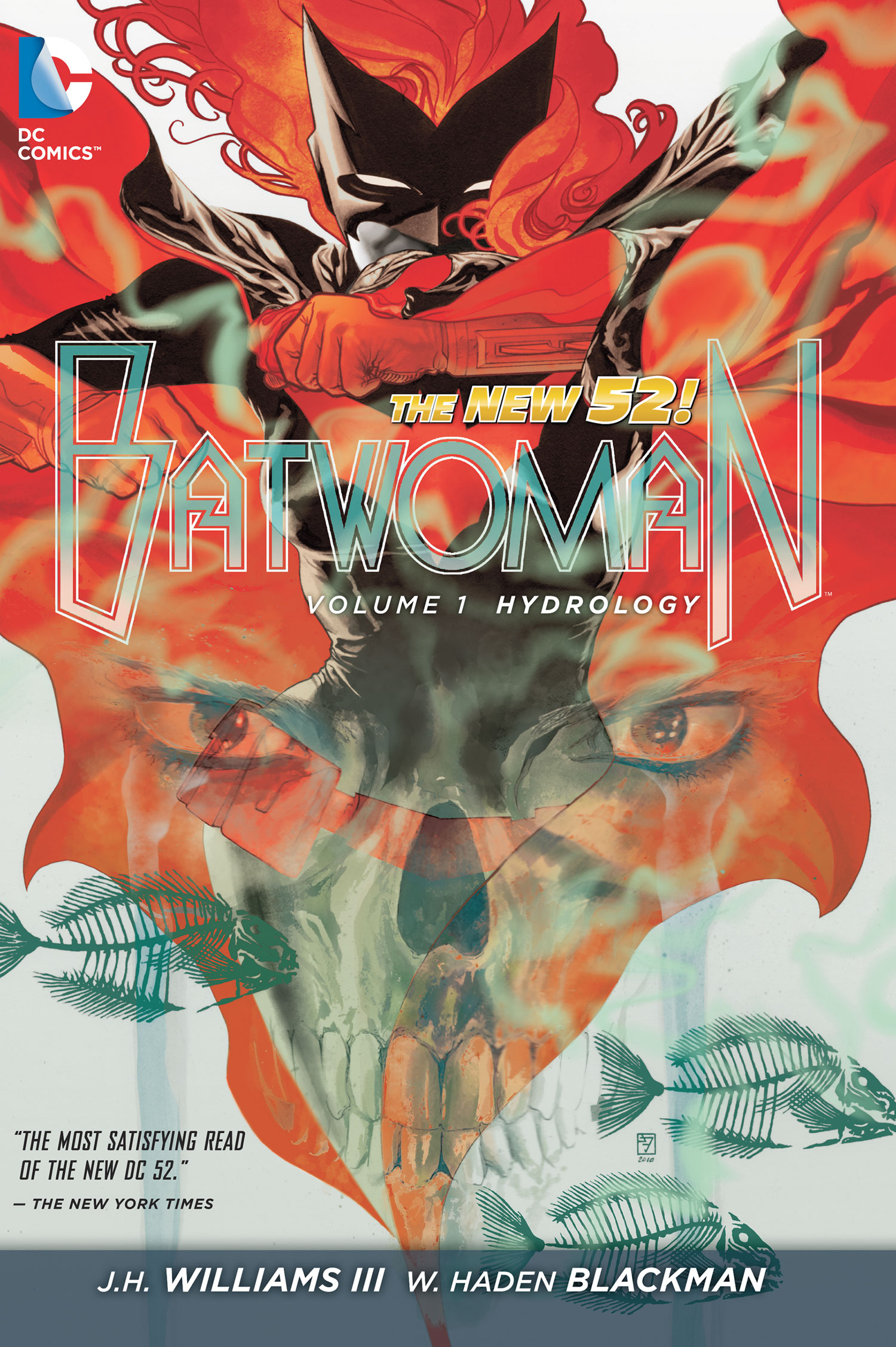 Beginning briefly in the pre-New 52 era, this book opens with Batman assessing the titled character: Kate Kane aka Batwoman. Throughout his investigation, Batman observes Kate/Batwoman on several occasions, attempting to come to the conclusion that they are one and the same. On the Batwoman side, he watches as she takes down a sect of the Religion of Crime lead by Sister Shard. Batwoman ends up taking down the assembled thugs and plants a charge on Shard during their fight, blowing up her cybernetic arm. She eventually takes down the remaining members, and watches as the nearby boat drives away with the sarcophagus they were attempting to steal. Batwoman manages to slip away just as the GCPD arrives.

On the flip side, Batman in disguise has been following Kate Kane for several days, watching her every move and attempting to discern her identity as Batwoman. Eventually Bruce disguises himself as a thug and attempts to attack Kate. She manages to quickly get the upper hand in the fight and Bruce runs away with a definitive fact: Kate Kane is Batwoman. Batman concludes that he will allow Batwoman to continue operating and offer her a position within Batman Incorporated.

Flash-forward into a new era. The “Hydrology” arc opens with Marggie Sawyer taking a statement from the parents of some kidnapped children; they describe how a spectral entity (a crying woman) took their children before being chased off by Batwoman. Leaving the police station, Maggie notices Kate Kane staring at a picture of her former girlfriend Renee Montoya. After making plans for their first date Kate leaves and meets up with her cousin Bette Kane (former vigilante known as Flamebird and at some point in the distant Golden Age, Bat-Girl). Donning a new uniform, Bette and Batwoman take to the rooftops…Kate has offered to train Bette.

Meanwhile we are introduced to Agents Chase & Bones of the DEO (Department of Extranormal Operations). Bones informs Chase that he wants the Batwoman and she will be heading to Gotham City to do so. Back in Gotham, Maggie continues investigating the disappearance of yet more children and tells Commissioner Gordon that the only lead she has is an urban legend, that of the Weeping Woman.

Back within her base of operations, Kate chastises Bette on not watching her back during their tangle with Q-Ball and the Pool Hall Gang. However they are interrupted by Jacob Kane, Kate’s father. Kate goes on a rampage and explains to her cousin how her father had known all along that her sister was still alive and had been turned into the villain known as Alice (for information on this story please see Batwoman: Elegy). Kate ends up leaving in a fury and continues her investigation of the Weeping Woman. It is here that she is approached by Batman.

A day or so later we find Batwoman explaining to Bette (mid fight) that she had not accepted the offer to join Batman Inc. She isn’t sure if the idea is brilliant or completely insane…and that she isn’t sure about taking orders from Batman: too many unresolved father issues with her own dad.

We then cut to Maggie Sawyer being approached by Agent Chase of the DEO and she instructs her to contact her if she finds out anything on Batwoman. Later that night, Maggie and Kate meet up at a bar on their first date. The night ends with the two going their separate ways…but ending up at the same crime scene. It seems that a new gang has attacked a group of were-beasts, and the gang made off with a victim missing a hand. On a nearby rooftop, Batman again confronts Batwoman warning her of Agent Chase being in Gotham and that the DEO is more than likely targeting her. He also informs her to drop the training of Bette Kane as it will more than likely get her killed.

Breaking into the GCPD, Batwoman uncovers the evidence she needs to track down a possible location of the Weeping Woman: a boathouse. Fleeing from Maggie before she can be caught, Batwoman arrives at the peer only to be overcome by water. Overcome within the ocean depths, Kate is faced with several visions of her sister…something that the Weeping Woman was hoping to use against her. However the symbol of the bat clears Kate’s mind enough to break free and swim to the surface. Arriving on the beach, Batwoman is quickly surrounded by Chase and other DEO agents. Kate quickly breaks away from her attackers and flees.

Arriving back at her apartment Kate finds Bette there and quickly tells her that she is done training her and that “(she) doesn’t have what it takes.” Kate hates herself for pushing Bette away for her own safety, but she finds comfort in Maggie’s arms.

In a state of anger and clear rebellion, Bette dons an old Flamebird costume and takes to the streets. Flamebird comes across several members of the gang that battled the were-beasts but is accosted by a large man with a giant hook for a hand. Bette attempts to fight him but is overcome and nearly gutted. Left for dead she is found hours later by Agent Chase and the DEO.

After spending the night together, we see the relationship of Maggie and Kate progress as they discuss the current case of the missing children. Later that night Batwoman continues investigating her case and uncovers the name and origin of the Weeping Woman: Maria Salvaje who’s children died and then she committed suicide via drowning.

Bette Kane meanwhile is still in the custody of the DEO and gives up Kate’s name as her emergency contact. It is this information that allows Chase to make the connection between Kate and Batwoman. Agent Bones arrives shortly afterwards on the summons that Chase has identitfied her target.

After some brief meditation Kate comes up with a plan to take down the Weeping Woman. Arriving at the boathouse where she killed herself, Batwoman is quickly confronted by the ghostly spectre. The Weeping Woman attempts to drown Kate in her own bad memories as we see flashes of the death of Maria’s children. Kate manages to break free from the assault on her mind and tosses a lighter towards the gas container she brought with her. Consumed by the flames, the Weeping Woman is slowly dispelled. Kate attempts to gain the location of the children from her, but the only thing revealed is the name behind it all: Medusa.

Back in her apartment Kate is confronted by Bones and Chase as they offer her a position in the DEO and enough help to take down the organization known as Medusa. The book closes with Kate at Bette’s bedside as she tells her the plan of working with Bones. Within the shadows Batman informs Kate that Bones will only try to use her to get to himself.

Batwoman can later be seen entering the home of the parent’s missing children and proclaiming that she will “soldier on” and find their kids.

This book is awesome. The story is a healthy blend of classic comic book action mixed with the weird supernatural world. I think that it’s interesting to have this type of Batman book that focuses on an element that the main stories do not. Having Batwoman take on the supernatural element is a fresh take on a series that could have gone with the standard vigilante taking on a masked villain attempting to rob or kill someone.

The art is also something that helps out the supernatural themes immensely. J.H. Williams’ art is so amazing that it is at certain point indescribable. Especially with the sequences involving the Weeping Woman attacking Batwoman’s mind, we find the art being swept up in the water and weird images. It is also amusing at times to see Batwoman hidden on pages where you don’t expect to find her (see the pages of Maggie investigating the were-beast crime scene), almost like a “Where’s Waldo” book.

Lastly, Kate and Maggie’s relationship is truly great to see. Being gay myself it’s not just the fact about seeing two woman in a relationship, but seeing a genuine relationship of two loving people. Also having the scene of the two of them making love while Flamebird is being attacked was truly beautiful…the juxtaposition is perfect: a bloody massacre transposed against a moment of pure happiness.

Overall this book is truly a must read! If you haven’t picked it up do so! It’s great for fans of not only Batman in general, but caters to the supernatural fans as well.