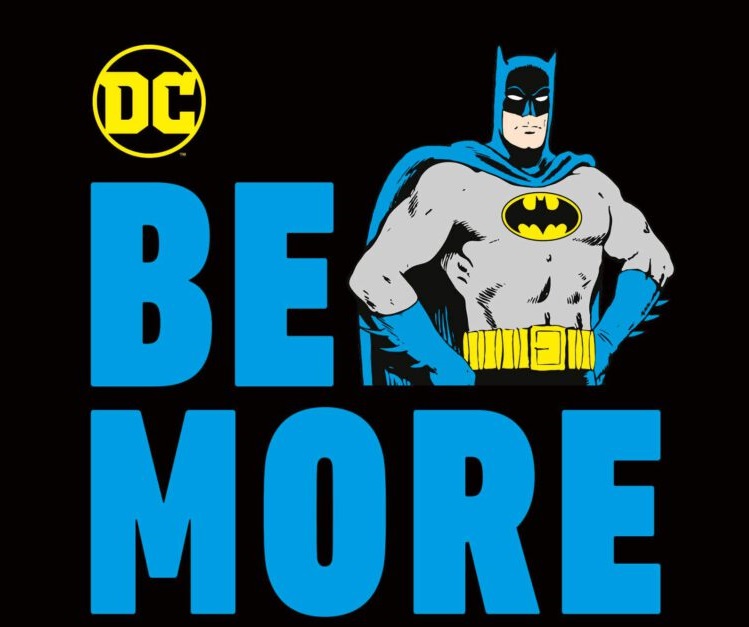 Overview: In Be More Batman: Face your fears and look good doing it, younger readers are treated to a delightful assortment of tips and tricks as to how they can become a hero like Batman.

Synopsis (spoilers ahead): Be More Batman: Face your fears and look good doing it by Glenn Dakin is an oftentimes humorous “guide book” for young readers on how they can live a life much like a superhero, namely Batman. The book is broken down into five sections, each accompanied with famous (and iconic) images from Batman comics both old and new. The sections are “Become a Hero,” “Fight Smart,” “Get Connected,” “Know Your Enemies,” and “Become a Legend.” Each section contains different tips and tricks that speak to the theme.

In “Become a Hero,” young readers are told to find a worthwhile goal (or “mission”) in life to champion. In order to better be like Batman, they’re encouraged to change themselves before changing the world, as well as dressing to impress, speaking like Batman, and being “mysterious.” It’s very tongue-in-cheek and not meant to be taken seriously, as is most of this book.

Similarly in “Fight Smart,” readers are encouraged to build a super cool base, accumulate gadgets, and know their strengths. In “Get Connected,” the lessons revolve around team-building and fostering a solid support group. The “Know Your Enemies” section subtly encourages children to take a stand, show strength and courage, and keep their enemies’ focus on them rather than innocent bystanders in order to save the people around readers. Lastly, the “Become a Legend” section is all about pushing oneself and overcoming obstacles in order to reach the status of a legendary superhero.

Analysis: As the subtitle Face your fears and look good doing it implies, this book can be pretty over-the-top at times. The “Fight Smart” section is especially silly, telling young readers to collect impressive gadgets, build a super cool headquarters, and act “mysterious” in order to gain attention.

Beyond the silliness though, there are some earnest moments buried within Be More Batman that could prove inspiring or helpful to young readers. Both the “Get Connected” and “Become a Legend” sections speak to fostering a solid, supportive community and standing up for what readers believe in. While the tone remains consistently silly, there’s an honesty there that could be taken to heart by kids in order to help them grow into stronger, smarter, and kinder people.

That said, this book is extremely short and sparse on text. There are only sixty-three pages, and at least half of the pages are devoted to illustrations plucked from famous comic books, with quotes related to the section they appear in overlaying the image. The bulk of the book is composed of artwork from the likes of Norm Breyfogle, Brain Bolland, Greg Capullo, Tony Daniel, Jim Lee, Clay Mann, Sean Murphy, Yasmine Putri, and Tim Sale to name a few of the many great artists who grace these pages. For the other half of the book, each page contains only one paragraph per page quickly summing up a lesson speaking to the section’s theme.

The write-ups don’t seem like there was too much thought put into crafting them either, especially since a good chunk of the blurbs lean toward making a silly joke rather than speaking to the point of how a child could become an everyday hero like Batman. This would be a moot point if the blurb on the back of the book wasn’t hyping up the fact that this is supposed to be a guide that answers the question “What would Batman do?” Ultimately, it seems like what the advertising for this book is promising doesn’t fully align with what’s inside. While there are moments where an honest lesson is touched up, there are plenty of other moments where Dakin just makes a joke about Batman or one of his rogues. It’s inconsistent and seems hastily written.

It’s also hard to gauge what age range this book is for. That’s not so much on the author as it is on the art selection. Dakin’s tone is pretty silly throughout, suggesting a very young readership (like maybe 5-7 years old). With artwork like Greg Capullo’s depiction of the Joe’s Garage Joker look or Mikel Janin’s roster of rogues from Tom King’s Batman run, the art selection suggests a slightly older audience (like 7-10). It’s hard to tell, but it lends to the idea that this book, albeit fun, isn’t sure what it wants to be.

Editor’s Note: TBU was not provided a copy of this title for review purposes. We reviewed this title for our own prerogative. You can purchase your own copy of the title by heading over to Amazon.

Be More Batman: Face your fears and look good doing it

Be More Batman: Face your fears and look good doing it is a super quick art book aimed at early readers. It doesn’t necessarily deliver on teaching kids how to “be more Batman,” but it might prove entertaining enough on a rainy afternoon.