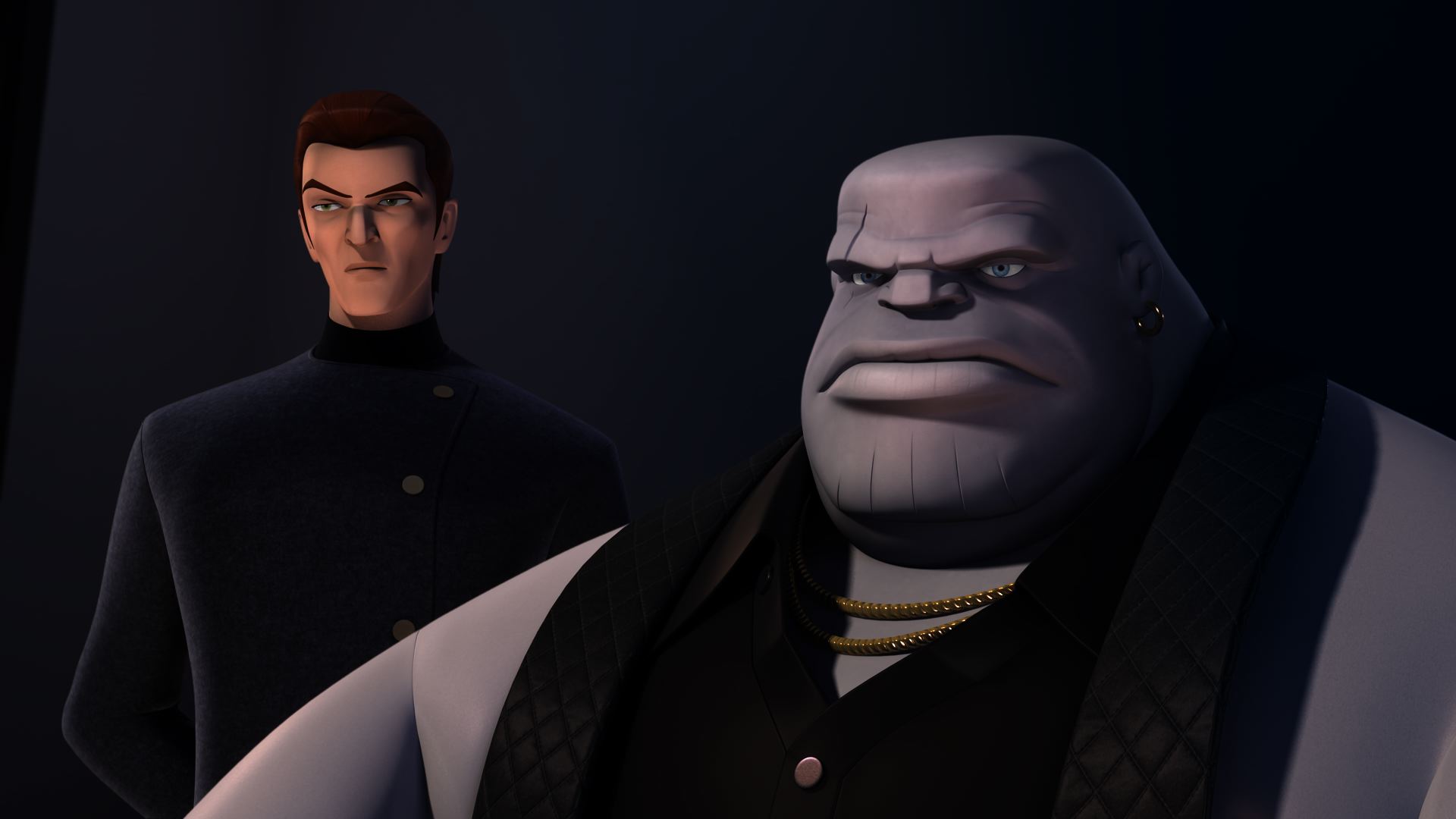 “Allies” begins with Tobias Whale robbing a Stagg Industries warehouse. Batman jumps them and apprehends Whale. Shortly thereafter, Gordon and the GCPD arrive. The lieutenant reams out Batman for not following protocol. When Batman rebuffs him, Gordon orders his men to arrest him. Batman drops a smoke bomb and escapes.

Back at the Batcave, preparations are underway to ready Katana to go out in the field. She is comically shown in a giant red suit. There is, of course, much annoying protest from Katana. She take soft the costume and puts on a mask and grabs a sword, which renders the Caped Crusader unimpressed. Despite it being her codename in the League of Assassins, Tatsu informs Batman and Alfred she wants to go by the codename “Katana.” The other complaint she has is their lack of effort to track down the League and recover the Soultaker’s Sword. Batman quickly explains to her why that is illogical.

Back at GCPD, Gordon is interrogating Tobias Whale. His Russian lawyer, Milo Match, offers Gordon a deal: Release Whale within four hours and drop all charges, or else. Gordon laughs at the offer and refuses. This proves to be his fatal mistake in this episode. As a result of his refusal, Barbara Gordon is kidnapped. After angrily and physically confronting Whale, Gordon looks through his daughter’s room. He discovers a necklace of hers with the bat symbol on it. This inspires him to setup the Batsignal on top of GCPD. As Gordon stands on the roof, kicking himself for how stupid his idea is, Batman comes out of the shadows to talk to Gordon. He welcomes the collaboration and says they need to get along because they are on the same side. Gordon disagrees that they are on the same side, but does admit he needs him on this one.

In the Batcave, Batman, Katana, and Alfred realize Barbara is being kept in an area of Gotham known as the Cauldron, an abandoned warehouse district run by small time criminals known as “ghosts.” Katana is told to stay in the Batcave, as Batman leaves to go invade the Cauldron. Predictably, she ignores her command. The episode ends with a siege in the Cauldron.

Overall, episode eight is of average quality. The writers continue to struggle to depict the female characters in a non-irritating way. Katana again cops an attitude, and we get the annoying teenage girl vibe again. Barbara Gordon, similarly, is again shown as an annoying teeny-bopper. The most irritating factor about her is the lack of fear she has while kidnapped. She openly makes smart-aleck remarks to people holding guns. I see no logical reason why the writers would depict her this way. The redeeming quality of this episode is the quality of the fight scenes, but for a show that has little else going for it, the fight scenes are getting less and less appealing. We have seen plenty epic fight scenes. Now we are getting used to them. This show cannot continue to rely on these scenes.

Lastly, these episodes are beginning to feel like an extended pilot. The characters and situations are developing slowly. I understand they need to get Batman and Katana working together and the same for Gordon and Batman, but I feel they need to do that more quickly. They should have held back the League of Assassins plot line, so they could take the first three episodes to set the show up properly. Right now, the show and the character development is dragging. They have the right animation to do a fast paced show, but the development of the characters and environment is making this show seem like it is dragging.