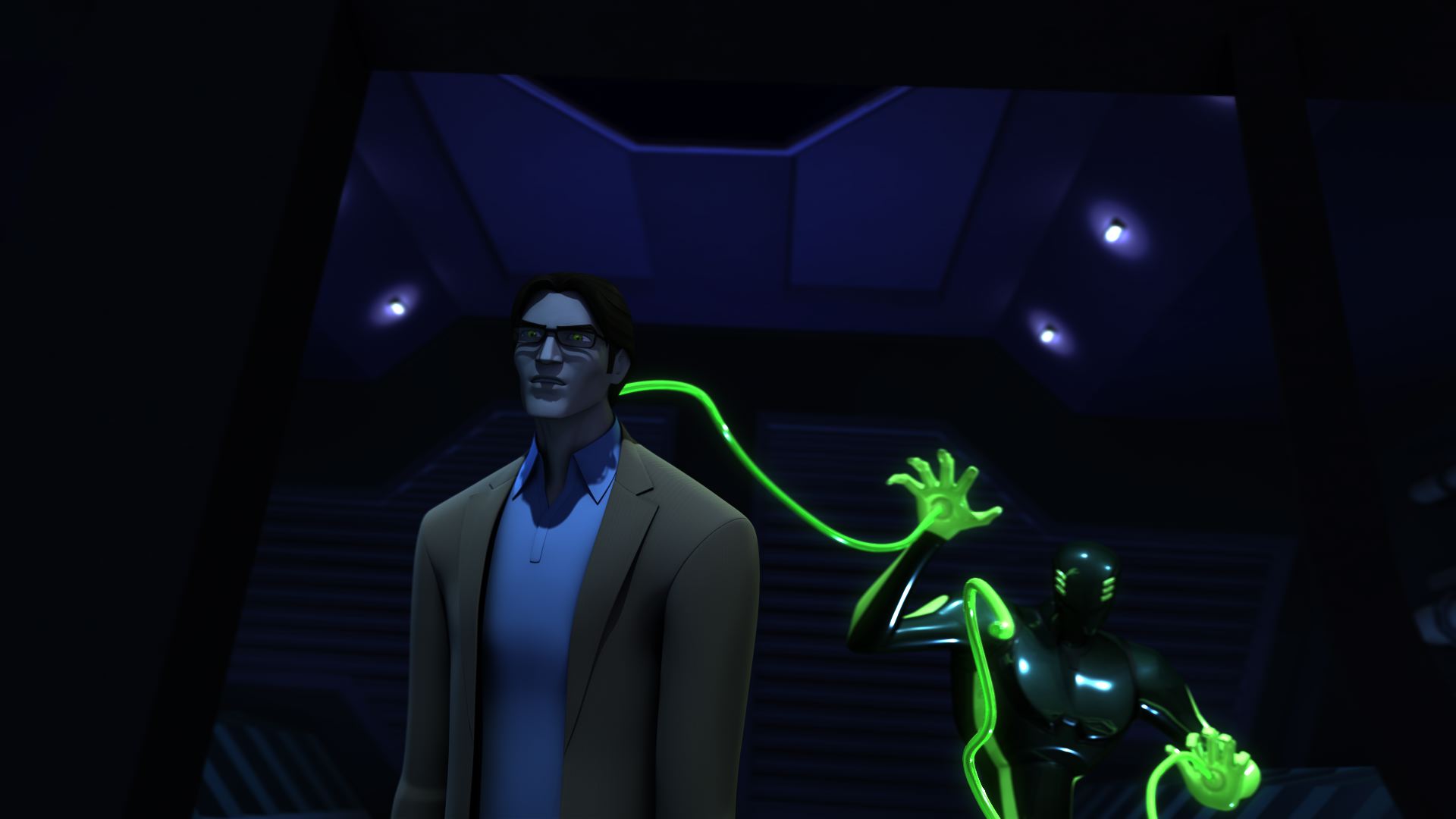 “Control” begins with an old man (who we later learn is the architect that designed the headquarters for Wayne Industries) alone working. He sees an eerie tube, which we quickly learn is attached and controlled by a creepy man in a strange outfit. Then we see the old man wandering the streets mumbling, “He has my mind.” When a policeman asks who has control of his mind, he responds, “Cypher.”

Meanwhile, in the Batcave, Bruce Wayne and Katana are practicing fighting. Bruce gives many a critiques to Katana; the last of which is: “Head over heart.” Katana receives a phone call from Jason Burr, the scientist behind the ion cortex. She acts like she is annoyed by him, but reveals they have a date. Just after she leaves, the 1960s Batphone ringtone can be heard, signaling Lieutenant Gordon’s Batsignal can be seen in the sky.

While Jason Burr prepares for his date with Katana, he is attacked by Cypher. Moments later, Katana enters Burr’s apartment to discover him sitting there dazed. He quickly recovers and shows Katana the prototype for the ion cortex. Trying to impress her, Burr uses the cortex to manipulate the lights in the adjacent building to display Katana’s face, which Katana enjoys. During the dinner conversation, the awkward scientist sticks his foot in his mouth and moves too quickly. About this time Cypher is revealed to still be in the building. Bursting in through the window and arriving in the nick of time is Batman, who has deduced that Cypher is after the ion cortex based on Lieutenant Gordon’s report. Despite this, Cypher is able to attach to Burr and make his way out of the building. Katana, now apparently in love with Burr, gets emotional and tries to fight Cypher unsuccessfully. Batman warns her about this, and instructs her to track, but not engage, Cypher and Burr, while he locks down the building. Katana, disregarding Batman’s instructions, falls for a trap set by Cypher.

Batman, after successfully locking down the building, finds Cypher and discovers that Cypher now has control over both Burr and Katana. Cypher threatens to fry their brains and control them forever, unless Batman handcuffs himself to the pipes in the stairwell and explains to him how to escape the building. After they are gone, Batman breaks free and uses the tracer he stuck on Katana to track Cypher. The signal on the tracer grows weak, and the Batcomputer suggests it might be underground. Due to the speed at which his target is moving, Batman deduces that Cypher has taken Burr and Katana on the subway, setting up a dramatic endgame in the subway tunnel.

While not a terrible episode, “Control” does give one plenty to complain about. Thus far, Katana has been portrayed as a dark, brooding, no-feelings character. Why does she now start having feelings for Jason Burr? Everything he has have ever done around her has annoyed her. In this episode alone, he calls her five times in one day, plasters her face on the side of a building, and invites her to dinner at his laboratory (I did not learn much in my high school chemistry class, but I do remember hearing that it was forbidden to eat or drink anything in lab). All of Burr’s actions towards Katana thus far are characteristic of a stalker. She should be filing a restraining order against him, not going on dates with him in a laboratory. Next, the villain of the episode, Cypher, had a few major faults, despite great potential. When he first attached to the architect, Cypher talked in his normal computer-like voice. However, when he took over Burr’s and Katana’s minds, Cypher only talked by using one or both of their voices with his own voice. Also, Cypher, for someone smart enough to create a computer system that can take over someone else’s mind, he sure makes huge blunders. First of all he invades the headquarters of Wayne Industries alone. Then, when he needs to escape, he has no means of driving himself to his hideout, so he takes the subway. Surely, someone must have seen him walk to the subway with two people attached to cords that are attached to his hands.

There are, however, redeeming qualities to this episode. The writers have moved away from an all-fight-scene episode to an episode that involves a little detective work and some quick thinking by Batman and Katana during the concluding scene. The whole “head not heart” plot line was a great idea, but lacked proper build up.

This show continually provides episodes that just barely miss at being spectacular, and sometimes being slightly off is worse than being completely off.