Review: Batgirl and the Birds of Prey #8 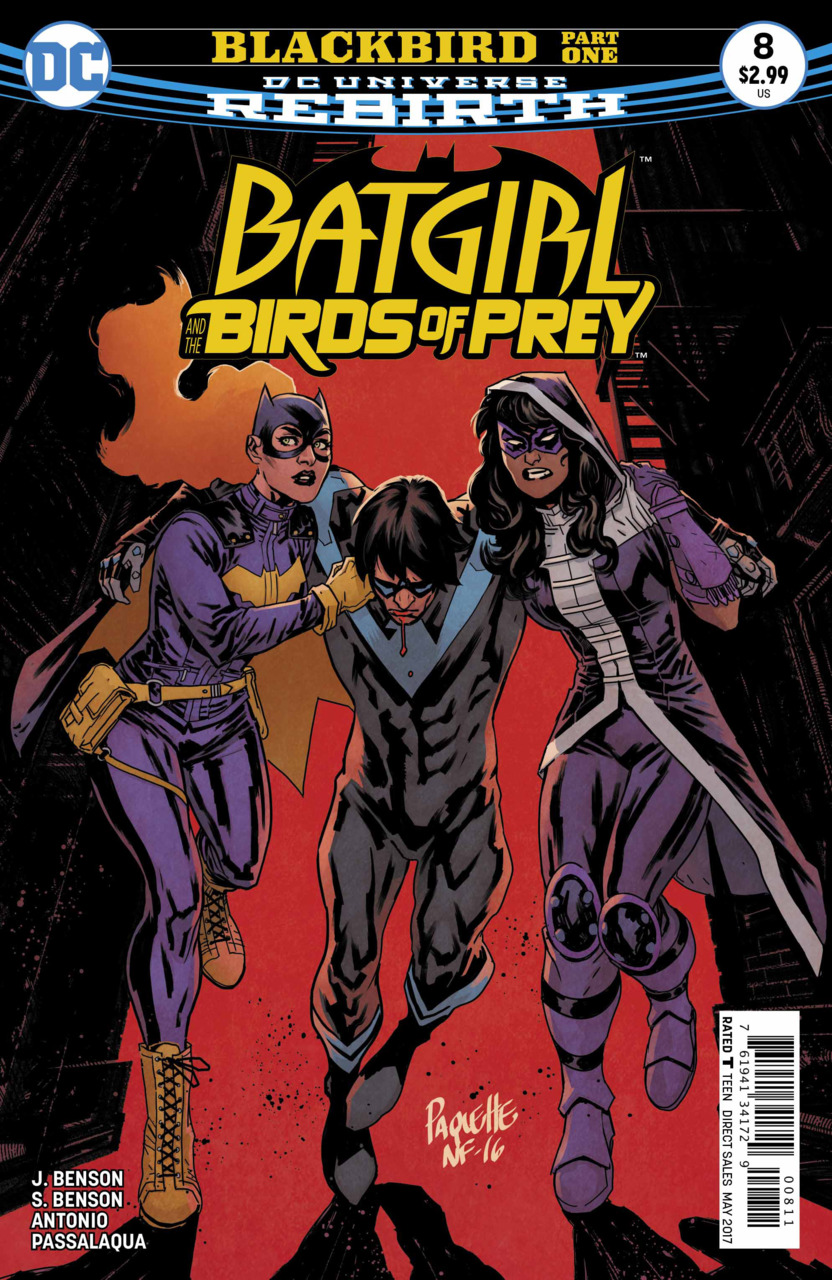 In Brief: Nightwing joins the Birds of Prey as the heroes stumble onto a new villain’s plans.

Summary (Spoilers): A motorcycle-riding Nightwing receives instruction from the new Oracle, but demands that Gus put Batgirl back on. The Birds are helping Dick track down the villain Gemini. Babs asks why Gemini came to Gotham from Bludhaven, and Dick says he intends to find out, but doesn’t need backup. However, Batman appears to beat Dick to the alleyway that Gemini stopped in, and then Nightwing’s earpiece fritzes out.

We see that Batman is actually Gemini, morphed into Batman’s shape, and she pulls out a vicious knife and stabs Nightwing in the back. The Birds arrive, and Gemini claims that “Blackbird” has given her more power. Gus frantically tries to think of a way to overcome the leveled-up villain, and Nightwing suggests fire to make it more difficult for her molecules to shift. As Gemini shifts to mimic Nightwing’s form, Black Canary recovers from the last attack and explodes the motorcycle’s gas tank. In the face of the fire, Gemini beats a hasty retreat, and the Birds convene at the Clocktower.

Helena and Dick catch up – Dick said that she found family with the Birds and not himself. Babs comes in and takes over Dick’s medical care, while Dinah and Helena head off to track Gemini with Gus. Dick is worried about Gus, saying that Babs can’t save everyone, and the two affirm their friendship and history even though Dick is seeing Shawn Tsang in his own title.

Helena and Dinah are taken aback by Gus’s angry demeanor, a contrast to his normal cheerfulness. Helena takes Babs aside to discuss the issue, and the two also laugh about Dick’s awkwardness given his romantic history with them both.

We see Gus taking his pill, and then is back to his normal self. He suggests the contact he used to hire the snake gang, who runs metahuman fights in the city. Dinah heads off in some classic undercover Birds of Prey action, despite the concerns of Nightwing and her teammates about going solo. She insists that her metahuman gifts make her the only choice for the mission, but promises to call in the team at the first sign of trouble.

Gemini stumbles to Blackbird, and begs for help. Blackbird steals her upgraded powers, and tells her to learn to live like a normal human.

In the dark city, Dinah finds the metahuman fight club, and intimidates Roulette into giving her a chance in the ring.

In Depth: The new arc of Birds of Prey promises a tighter story than the 7-issue introduction, being only three issues long, and this opening delivers a ton of action and character interactions. The fight with Gemini is very creepy, and Babs and Helena’s relationship holds firm despite their romantic history with Dick. Roge Antonio provides his standard appealing pencils, balancing his wide-eyed style with the darkness of Allen Passalaqua’s colors to provide a very polished issue. The two covers provide a hint at the themes of this book – Yanick Paquette’s standard cover depicting a scene that actually occurs in the book, with Batgirl and Huntress helping the wounded Nightwing, and the variant by Kamome Shirahama highlighting the team’s unity through a beautiful striped effect.

Gus’s mysterious secret causes some tension in this issue, as his reliance on his pills hints at a darker turn for the normally bubbly fanboy. Dick and Helena’s concern about Gus provides echoes of Barbara’s attempts to save Helena, Savant, and Creote in Gail Simone’s first run on the title. All in all, the pieces are in place for an exciting story as Black Canary goes into the lion’s den alone.

Pick up/Pass? Strong art and writing, definitely worth picking up.

In Conclusion: “Blackbird Sings” starts off the Bird’s next adventure with a bang and strong character moments.