Review: Batgirl and the Birds of Prey #10 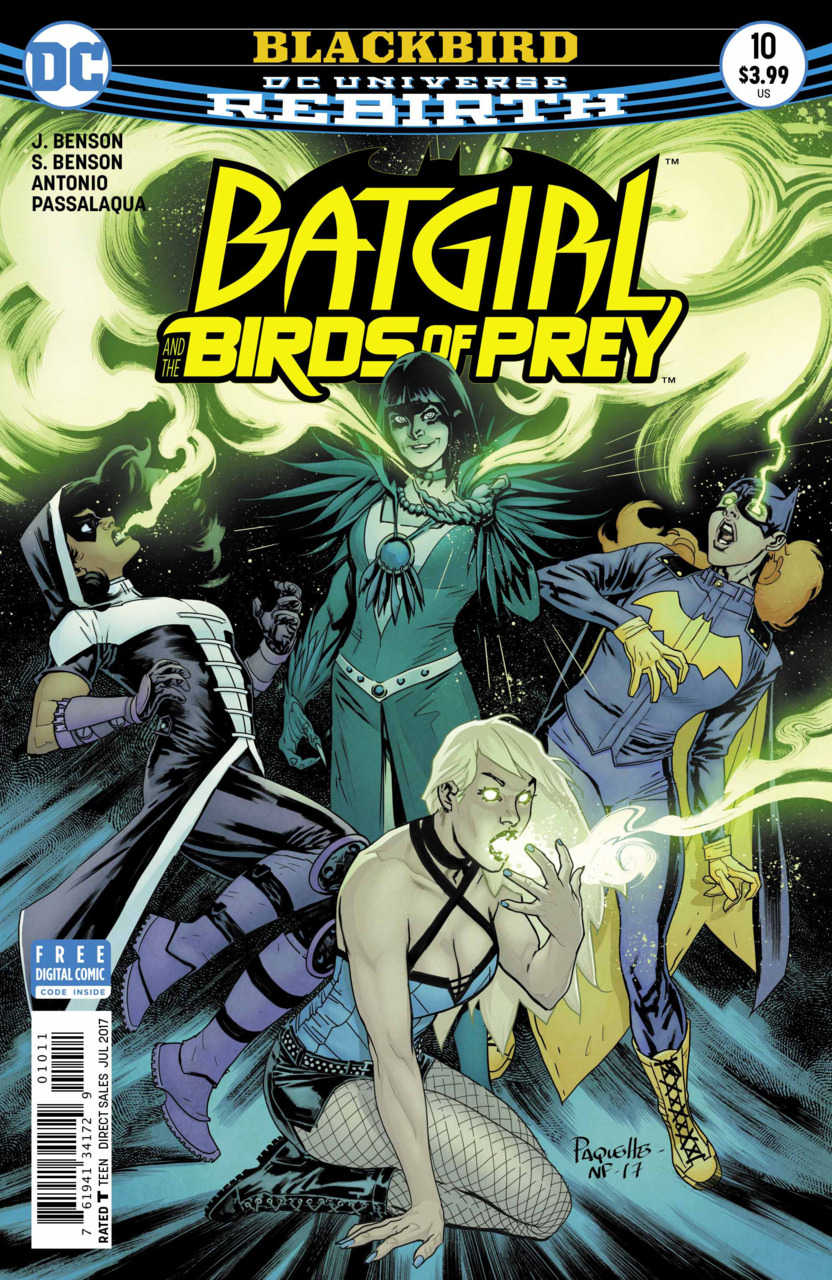 In Brief: The Birds team up with Nightwing and Green Arrow to defeat the power-stealing villain Blackbird.

Summary (Spoilers): Rushing to save the undercover Black Canary, Batgirl, Huntress, their allies Nightwing and Green Arrow, and their former adversary Gemini find an empty room. Owen, the mind controller who befriended Dinah last issue, tells them Blackbird took his powers and vanished. Helena makes a call to deal with the mind control powers Blackbird stole, while Babs comforts Ollie.

Oracle (Gus) finds Blackbird at the Clocktower, and the team heads out, with Gemini staying behind to help Owen. However, he finds his medication has been stolen, and his mysterious controller insists on a meeting with the Birds.

Arriving at the Clocktower, they find Dinah using her cry to blow out the clock face. Babs notices something isn’t right, and tricks Blackbird into revealing that she’s used Gemini’s shapeshifting powers to take Dinah’s appearance. Decking the villain, Babs initiates a full out attack by Blackbird’s students, including Dinah, using her cry to hover in the air.

Huntress faces Blackbird solo, but the stolen mind control powers appear to take over her mind…until we discover that Helena has reactivated her Hypnos implant from Spyral, with some help from Patron, Helena and Dick’s former coworker and current head of the clandestine organization. Abandoning mind control attempts, Blackbird begins blasting the team, and Babs calls Oracle for information on the power’s weakness. Fighting off his withdrawal, Gus interrogates Owen with his drone, then relays the information that the bond of friendship the Birds and Ollie share with Dinah should help her break free from Blackbird’s grip. Using Babs’s grapple, Green Arrow and Batgirl immobilize Dinah, and remind her of their history and feelings for each other.

Increasingly unhinged, Blackbird attempts to control the whole team. Failing that, Canary’s cry takes her down, and the other student traps her in a force field bubble. Using Hypnos, Helena wipes the information stolen from Dinah about their identities from Blackbird’s mind, and she’s carted off to Arkham.

In the aftermath, Dick takes Gemini back to Bludhaven to join the Run-Offs, who are a team of former supervillains attempting to heal after giving up the life of crime. Dinah and Helena plan to help Owen with his education, and Patron (the Tiger) turns off Helena’s implant again. Ollie heads to Seattle, promising to meet Dinah there soon. The Birds feel it’s time to invite Gus into their team more fully, but he invites them to a meeting with his controller, telling himself that this betrayal will send him to hell.

In Depth: The Birds of Prey has always functioned best as a team, and it was worrying last month when all but two pages of the issue was spent following just one member of the team without any reference or interaction with the other two. The Bensons make up for that with this enjoyable romp of a climax to the three-issue arc, bringing the Birds back together with a classic “power of love breaks mind control” plot, flavored by Star Wars references and banter. Helena, though the newest member of the team, has some excellent heroic moments when she uses her past as a super spy with a Hypnos implant to defeat the mind control powers of their foe, and her moment of bonding with Dinah over helping to teach Owen keeps that element of her character going.

Roge Antonio provides solid pencils, as always, though some of the final pages look a bit under-finished, with a sketchiness to the shading and facial shapes that isn’t usually a hallmark of his appealing, rounded style.

The presence of Gus as Oracle has been a less successful element in this first year. Though he’s nowhere near as superfluous as Hawk and Dove in Gail Simone’s second run on the Birds, or as obnoxious as the guest characters in the New 52 iteration of the team, he definitely doesn’t quite fit. His skills are useful, and his fanboy relationship to the Birds can be fun, but thankfully, the Bensons seem to know he should only be used in small doses, like Josh in Simone’s first run. The conclusion to this issue promises that we’ll finally delve into where he does fit, and who the mysterious controller behind him is. Yanick Paquette’s cover for next month, featuring Gus looking out at the reader from behind a shattered Oracle mask, provides an ominous look ahead.

Pick up/Pass? Back to enjoyable form, this book is a pick up.

In Conclusion: Bringing the book back up after a sagging middle issue, the Blackbird arc concludes nicely, and leads right into the next story.