Review: Batgirl and the Birds of Prey #11 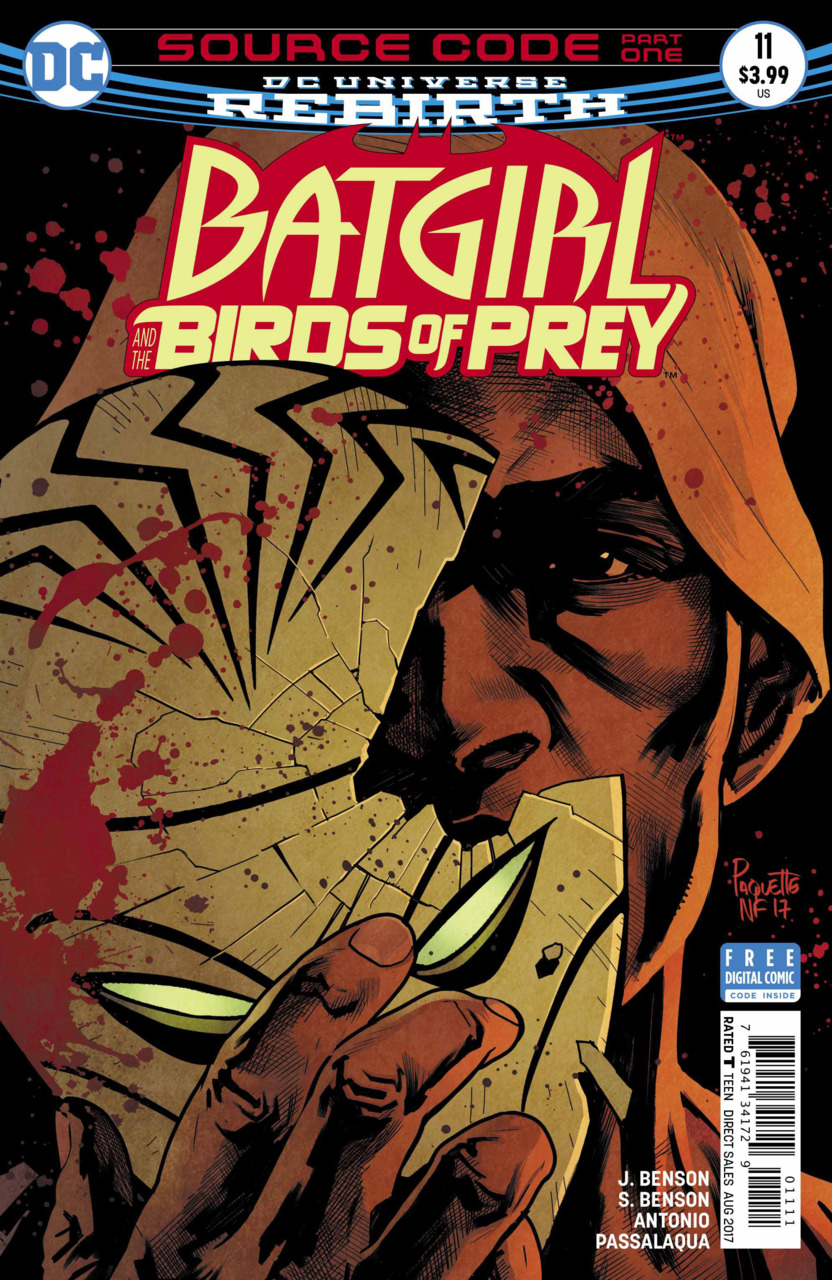 In Brief: Gus, the new Oracle, finds himself in hot water with the Birds when his past comes to light in “Source Code”.

Summary (Spoilers): At the clock tower following the conclusion of the Blackbird confrontation last arc, Gus finds himself held upside down over the ledge of the tower by Huntress (Helena Bertinelli) and Black Canary (Dinah Lance), as Batgirl (Barbara Gordon) orders him to tell them the truth about his past. She tells him she’s been watching his every keystroke since they found him, and has learned he’s working for someone else. He explains that he originally used his intel brokerage to help his mother pay her bills, but was found by a dangerous man with OCD and a powerful hatred for the original Oracle: The Calculator, Noah Kuttler.

Babs tells Helena her history with Calculator – a history of Oracle vs. villain, Birds vs. robot avatars, move and counter move. Gus denies telling Calculator their secret identities, but also says he’s more complicated than simply a monster – though Calculator is definitely a monster. But he also loves his family, takes care of his employees and the environment, and teach Gus a lot – though sadly about how to manipulate people and hang them out to dry when they’re no longer useful.

Calculator assigned him to infiltrate the Birds, but Gus deliberately tried to get their attention, hoping they could save him from his situation, though unable to ask directly. Babs confronts him about his illegal medication, and he admits he has bipolar disorder. The Birds tell him that he has done wrong, but they are there to help him, just as they are there to help any person in need. Together, they set a trap for Calculator – but when they spring it, he asks for their help, instead of fighting. He claims his wife and children have been kidnapped because of the last job he did on a company called Terracare. They agree to help him if he releases Gus from his organization, and never bothers the Birds again. Kuttler agrees, and lets them know that his client was Catwoman.

In Depth: After a bit of a shaky arc with Blackbird, which had a strong opening and closing, but a dragging middle issue, the Bensons are back on track with an issue that combines teamwork, solid art, and more revelations about continuity in the Rebirth world of DC. Just as the Superman: Reborn storyline and the Deathstroke title by Christopher Priest have overtly or subtly combined elements of the new 52 and pre-Flashpoint continuities, the Bensons’ have brought back some fascinating elements with the introduction of Calculator. Babs’ history of their battles include the battle against Calculator and Deathstroke in Birds of Prey: Perfect Pitch (#86-90) by Gail Simone, Oracle: the Cure (Birds of Prey #126-127 and Oracle: The Cure #1-3) by Tony Bedard and Kevin Van Hook, covering the battle against Calculator’s cybernetic avatar, Batgirl: The Flood (#9-12) by Bryan Q. Miller, for Calculator discovering Oracle’s identity, and Babs retaliating by wiping that knowledge from his mind, and lastly Birds of Prey: Death of Oracle by Simone again, dealing with Babs faking Oracle’s death at the hands of Calculator (#7-10). This massive influx of continuity, made clear by the visual references in the montage of Babs’ narration, shows that the n52 continuity has been given a shot in the arm by Rebirth, with material previously completely off limits being brought in with enormous gusto by the Bensons and their longbox acumen.

Roge Antonio appears to be the Birds new regular artist, and he proves he has the stuff to make the title a success, even if this reviewer will miss Claire Roe’s super muscular Birds. The panel early in the story of each of the Birds from a low angle shows that even his appealing, cartoony style of faces can be very intimidating, especially when colored with perfectly uneasy underlighting by master artist Allan Passalaqua. His rendering of Catwoman in the final page is also very seductive and powerful, and hopefully the Bensons will do as good a job as Tom King in the main Batman title with this sometime friend, sometime foe of the Birds – after all, Cats and Birds have a tricky relationship!

Pick up/Pass? A strong start to a promising three part arc, this is a definitely pick up.

In Conclusion: Kicking off the Source Code arc with surprising continuity revelations, solid character work on all three Birds, and the promise of many exciting guest stars in Catwoman and Calculator, Batgirl and the Birds of Prey are flying again.