Review: Batgirl and the Birds of Prey #15 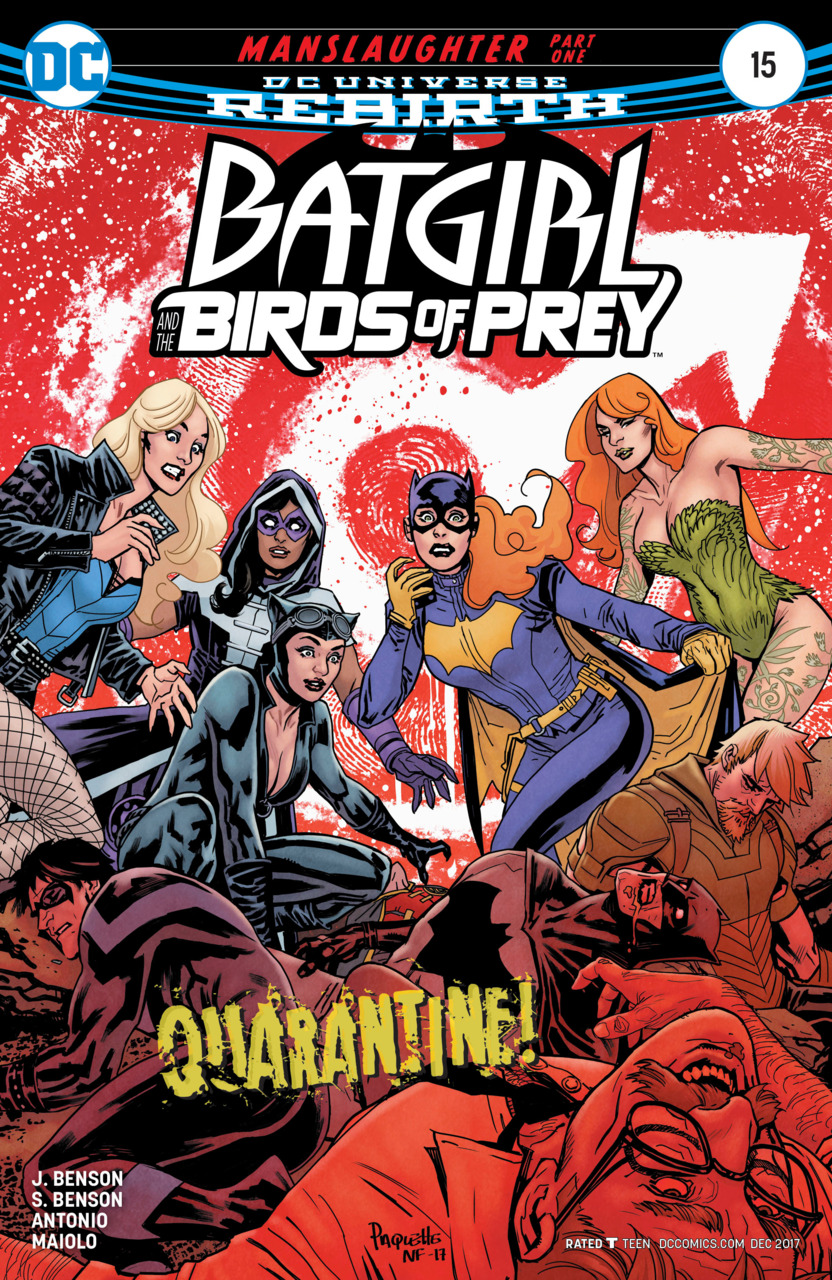 Overview: Why have all the men in Gotham City suddenly come down with the flu? Who could be behind such a dastardly deed?

Synopsis (spoilers ahead): Barbara Gordon is tending to her Father, Commissioner Jim Gordon, in his hospital bed. He has a terrible flu that has also taken down much of the GCPD. Lois Lane is in Gotham and stops by his room to get an interview. Babs gets an important text message and has to run out.

Oliver Queen arrives at the Gotham airport where he has come to visit Black Canary. Dinah also gets a message and rushes off.

History teacher Ms. Bertinelli is missing half her class, which is out sick. The school has canceled classes due to the epidemic. Helena also gets a text calling her away.

Our three heroes descend on an abandoned hospital where Professor Pyg has a man and girl hostage. Batgirl and the birds easily take out Pyg and free the hostages. Pyg begs them to take him to a hospital because he is sick.

Black Canary finds Harley Quinn breaking into the Pharmacy for flu meds for Joker. Dinah explains the situation and Harley comes along to help out.

Huntress finds Catwoman breaking into the jewelry store and tell her about the illness that is affecting all Gotham’s men. Selina’s mind immediately turns to Bruce and she joins the effort to find out what is happening.

The CDC has sealed off Gotham General and a special agent is on the case – Amanda Waller. Waller seems to imply that someone is behind the plague. Our heroes wonder who could hate humanity so much that they would do this. All minds turn to Poison Ivy. They visit Ivy but she insists she has nothing to do with the illness and joins the women to figure out what is happening.

The collected team are on a Gotham rooftop when another team arrives: Batwoman, Orphan, Spoiler, and Gotham Girl. The four are there to help Batgirl and the Birds but aren’t eager to join up with Harley, Catwoman, and Ivy. They eventually realize that they have to work together.

Finally, they are then joined by one last team member – Wonder Woman!

Analysis: It looks like writers Julie and Shawna Benson have created an all star team up of female heroes and almost-heroes that we will be following through the story. On the one hand, the creation of the team is at times heavy handed and unrealistic. Harley hasn’t been in a place where she would help nurse a sick Joker in a long time. Also, having the team of Batwoman et al resist joining the Sirens on a quest and then going along with it seemed like it was done to create tension, but then released to further the story plot.

Also, Batgirl and the Birds weren’t introduced particularly well. Commissioner Gordon looked younger than we are used to and it could take readers a few times through the first page to orient themselves. Also, Dinah was wearing a hat that could have led you to believe she was Lady Blackhawk and was talking about Ollie in a way that seemed like she didn’t know him. However, it was just a gag and after a second read it was cute.

Professor Pyg goes from evil and menacing to being incapacitated from the flu in record time, it seemed very fast and unrealistic. Also, there is no obvious relationship of any kind between the Sirens which is disappointing.

Roge Antonio is the artist with Marcelo Maiolo on colors and Josh Reed on letters. The lines are simple and easy to read and watch. The palette is soft but still colorful. Most panels are muted but some have vibrant violets, yellows, or reds. It is an approach to color that works, easy on the eyes but still beautiful.

I complained a lot about certain elements of the plot but even with all of those technical problems in the story I really loved where we ended up. At the end of the first issue of the arc we have put together an amazing team consisting of the Birds, Sirens, female Bat-Family members, and an Amazon…oh and Amanda Waller too if that wasn’t enough. As I turned the pages I kept thinking “Yes!”, “Yes!”, “Yes!”. I might have actually disturbed my house when I saw Wonder Woman on the last page.

I liked that Canary handily defeated Harley. As much as I love Ms. Quinn, she is no match for Dinah hand to hand, and their fight was done well. I also loved how Selina joined the team because of her concern for Bruce. So sweet.

Final Thoughts: Although I am concerned that there are too many characters to tell this story efficiently, I figure that it will focus on Batgirl and the Birds, but I hope we get a few classic nuggets from the other teams. Because of the terrific progress of the story I am inclined to forgive the problematic portions of the story. I absolutely want to see where this is going, but I will hold off on getting too crazy with my rating until I see more.