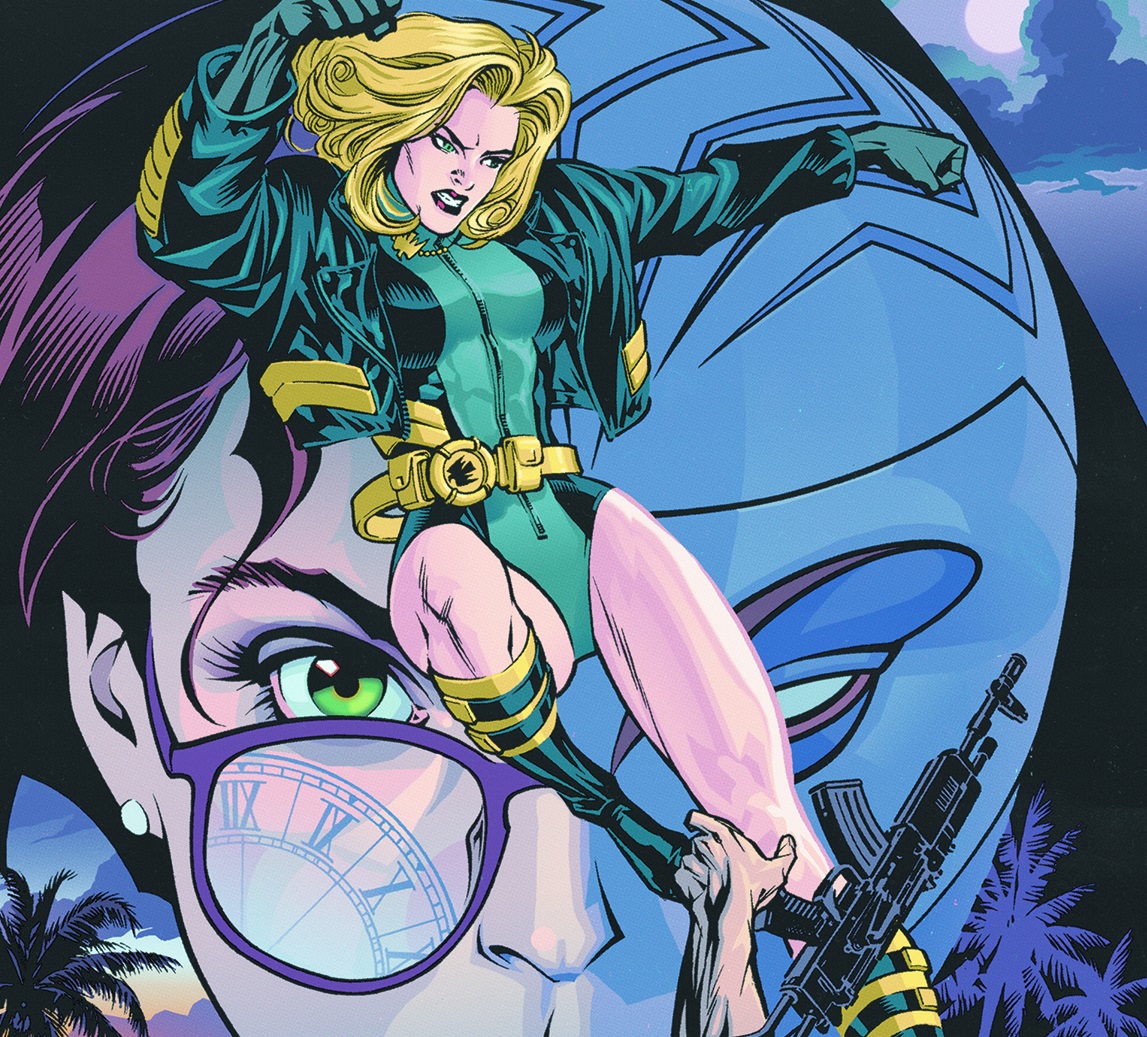 Welcome to TBU’s spotlight on the Birds of Prey roster! Inspired by the recent “Manslaughter” arc in the current Batgirl and the Birds of Prey title, in which our main Birds; Batgirl, Black Canary, and Huntress, team up with a huge team of heroines (and a few villainesses), we wanted to give a rundown of some of the previous members of the fables super group.

This first installment will cover the seminal run of Chuck Dixon, who with a team of amazing artists, created a part of the DC Universe that captured the hearts of many fans. One of the reasons, of course, was the focus on two powerful and intelligent super heroines, instead of a male duo like Batman and Robin, or a mixed group like the Justice League. Such a team was a fairly rare occurrence, and even today, the influence of the Birds can be traced to many a team-up.

This does bring up the oft-repeated question: can a male hero be considered a member of the Birds? This writer does not believe so. After all, the humor of the team name – Birds of Prey – deliberately references the female nature of the team with the old-time slang “Bird” for woman, and the “core” members have always been female. So for this series, there are two categories – “core” members – those who are considered by the team members themselves to be permanent parts of the Birds of Prey, and that team forms a central part of their daily lives. All other members are considered “allies,” whose lives mostly went on as support for the Birds, and whose main activities are not contained within the Birds of Prey series.

Before we get on with the roster, one last word. Along with the great Chuck Dixon on near sole writing duties during the initial quarterly one-shots, followed by a few miniseries, and finally launching into the mighty ongoing for forty-six action-packed issues, such artists lent their talents as the veteran Gary Frank (soon to explode in recognition as he collaborates with Geoff Johns on Doomsday Clock), Greg Land (X-Men: Phoenix: Endsong), Phil Noto (Black Widow), Butch Guice, and many more. After Dixon left, and before Gail Simone began the Birds’ renaissance with issue #56, independent writer Terry Moore (Strangers in Paradise, the currently ongoing Motor Girl) and writer Gilbert Hernandez did two arcs, neither of which had much impact on the series or its fanbase. Oracle (Barbara Gordon): Barbara Gordon, the former Batgirl, was shot by the Joker and paralyzed below the waist for life. However, through the brilliant inspiration of John Ostrander and Kim Yale, she took on a new, perhaps even more powerful career as the hero Oracle in the Suicide Squad. That wasn’t enough for Barbara, and she soon decided to form her own team. After a few abortive attempts to find partners, she finally forged a bond with Black Canary, Dinah Laurel Lance. Though her controlling nature (very similar to her mentor Batman) proved a source of conflict, especially in the beginning, Barbara forged a close, powerful bond of friendship with Dinah over the years of work saving the helpless. She funds her work as the incredibly technologically powerful Oracle by creatively misplacing large sums of money from criminals, which eventually leads to a confrontation with Blockbuster in the famous storyline The Hunt for Oracle. During this conflict, she finally meets Dinah face to face, taking their partnership to a new level.

Barbara appears in every issue of Birds of Prey, so it’s difficult to pin down any key appearances. However, she has a masterful confrontation with the Joker when she interrogates the maniac who shot her in Birds of Prey #16. The famous Hunt for Oracle crossover with the Nightwing title occurred in #19-21.  Her relationship with Black Canary is also setup in Dixon’s beautiful prequel Batgirl: Year One issues #6-7. Black Canary (Dinah Laurel Lance): Dinah Laurel Lance, daughter of the first Black Canary, veteran hero and member of the Justice League, was not in a great place when Barbara Gordon contacted her. She’d lost her love, Oliver Queen, to the grave (he got better), and her famous Canary Cry was gone due to injury. The mysterious voice who contacted her through phones and computers soon turned her life around. Though the techno-phobic Dinah clashed with Oracle’s preferred methods of communication, it was the controlling nature which really set the two at odds. Dinah loved life and lived to the fullest – barging in to save people without a second thought, loving quickly and intensely, and hating just as strongly. Her great skill in martial arts made her an ideal field agent for Oracle, even without her metahuman ability. As mentioned in Oracle’s profile, after a long period of growing trust and commitment, Dinah finally met Oracle and learned that she was Barbara Gordon when Blockbuster initiated a hunt for the hacker. Dinah saved her from a sinking submarine, and then sacrificed her safety to prevent the less mobile Barbara from being stolen by Blockbuster’s men. Eventually, Dinah’s cry was rejuvenated in a thrilling plot including an unexpected engagement to Ra’s al Ghul. With her power returned, Dinah became even more a force for good as the face (and fists and feet) of the Birds of Prey.

As far as key issues go, obviously her first few missions for Oracle contained in the handy collection of the miniseries and one-shots, Birds of Prey volume 1. The first few issues of the ongoing series are delightful, showing her sense of humor as well as her skill, and her famous and consequential love affair with Ra’s al Ghul appears in issues #31-35. Additionally, Birds of Prey #18 prefigures the themes and messages of Tom King’s much praised Omega Men in its succinct exploration of the effects of religious prejudice and war on everyday people.

The Early Allies of the Birds Catwoman (Selina Kyle): Though her status during the 90s prevented Catwoman from really becoming a regular member, on a few occasions, her goals have coincided with the Birds, such as when she works to get revenge on a cheating romantic interest in the Birds of Prey: Manhunt miniseries, and issue #12 of the regular series. As usual when Dixon wrote Selina, she’s extremely playful and self-centered in her goals. The Birds usually know exactly how far to trust her. Huntress (Helena Bertinelli): Though she would later become central to the Birds, during the first four years of their existence, Huntress was a bit too far on the outside of the hero community to fit in well with the relentlessly altruistic mission of the Birds. Like Catwoman, she had a stunning guest appearance in the Manhunt miniseries, also seeking revenge on the wicked Lothario. Lois Lane: Though she obviously had her own adventures, early in the Birds’ history, Lois and Dinah shared their very own, with Barbara acting as unseen and very worried observer in Showcase ‘96. Guest writer (and frequent editor of the Birds) Jordan B. Gorfinkel wrote this one-shot, highlighting Lois and Dinah’s takes on their romantic woes – Oliver Queen being dead at the time, and Superman not really keeping his end up with Lois. Jason Bard: Introduced early as a former and possibly future love interest of Barbara’s, he serves ably as a friendly “competition” in many of the Birds’s cases in his capacity of private detective. He features particularly strongly in the famous case of Dinah’s romantic entanglement with Ra’s al Ghul. Blue Beetle (Ted Kord): First heard from in Birds of Prey #9, Ted Kord, tech genius and former gadget-loving superhero Blue Beetle, features as one of Oracle’s electronic acquaintances. Though initially appearing as a supporting, possibly romantic interest, he quickly returned to his heroic roots, assisting in the Ra’s al Ghul arc alongside Jason Bard. Sadly, he met a tragic fate in an event late in Dixon’s run, and so disappears suddenly from their lives. Power Girl (Karen Starr): Perhaps the most well developed ally of the Birds was Power Girl. Dixon played a very long game with her, first having her show up in the second year of the series (issues #12-17), hinting that she and Oracle shared a very tragic past, leaving Power Girl extremely bitter. She continued to make guest appearances, each time continuing with the clues as to her background, until finally issue #42 revealed the whole story. Power Girl was the first hero Babs tried to recruit to form the Birds – and similar to Dinah, she was adrift, having lost a significant chunk of her capabilities, and the drive to be a hero tearing her to pieces with no one to help. Babs gave her a chance, but due to mistakes on both sides, the mission ended in complete, violent failure. Though she didn’t act as an ally to the Birds during Simone’s run, she did make a few appearances – once in issue #85, when her complicated feelings towards Barbara are shown in delicate way, and again in the 100th issue, when she throws an invitation to join Oracle’s rotating roster of field agents in the trash angrily. Nightwing (Dick Grayson): Babs’s longtime friend, partner, and deep romantic interest shows up many times during the course of the series. Though he rarely acts as an ally on the team’s missions, he took Babs on an extremely memorable date in Birds of Prey #8, and the Nightwing series crossed over violently with Birds of Prey in the Hunt for Oracle arc, when Nightwing’s nemesis Blockbuster comes looking for the hacker who stole millions of his money (Birds of Prey #19-21). Spoiler (Stephanie Brown): Though she first met Dinah in the Robin 80 Page Giant, the earnest but under-trained hero approached the veteran martial artist for mentoring (and assistance with her no-good dad the Cluemaster) when Batman left his own training program unfinished during the Bruce Wayne, Murderer? story line (Birds of Prey #39-40, #43). Though Dinah helps her out, she is torn away by duty, leaving the young hero with encouraging words. She evidently made a big impression on the Birds, as her “death” in the War Games crossover is referenced several times during Gail Simone’s run (a fact that was picked up again when Steph returned and became Batgirl).

That wraps up the original early run of the roster from the Birds of Prey. Do you have a favorite? Stay tune for the next part which delves into Gail Simone’s run on the original series.