Review: Batgirl and the Birds of Prey #17 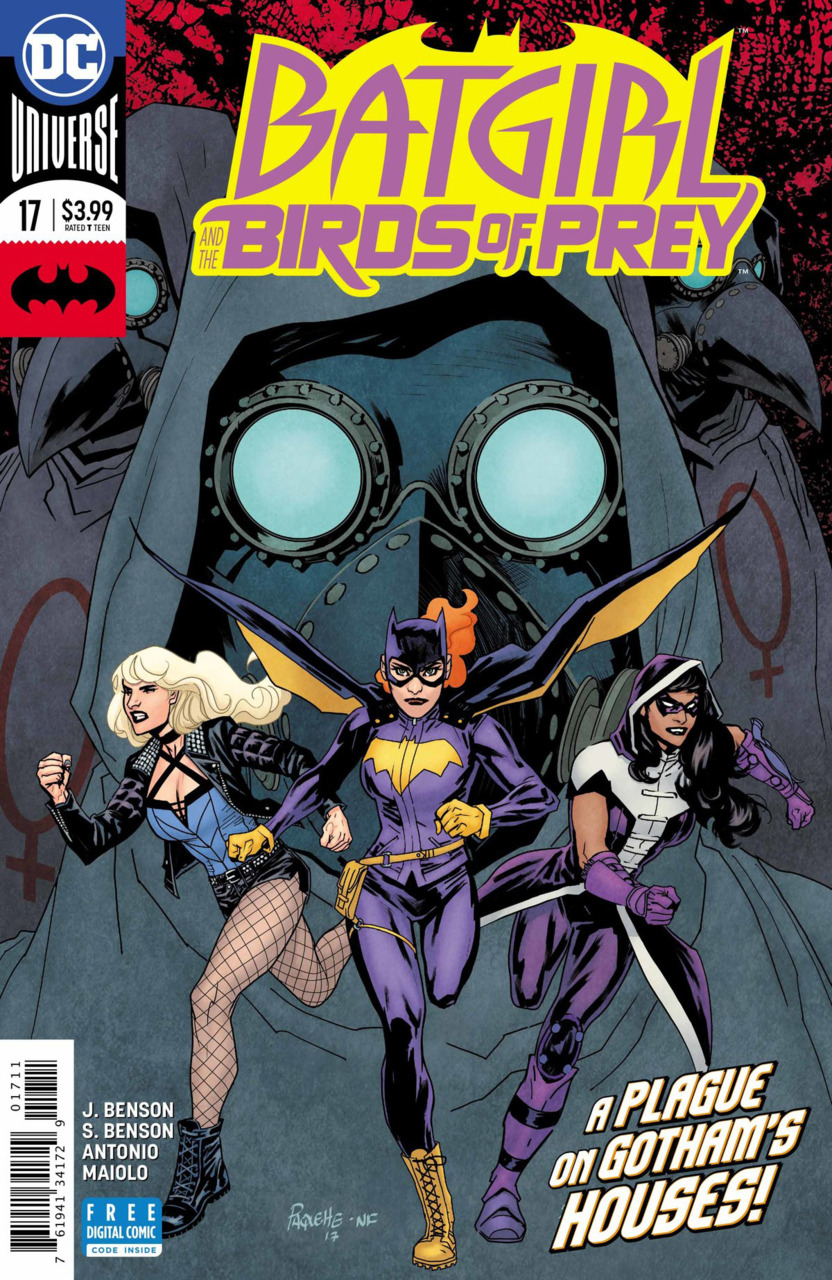 Overview: DC’s female heroes try to stop Patient Zero from killing all the men in Gotham.

Synopsis (spoilers ahead): Batgirl, Harley, and Batwoman are tied up by talking with Patient Zero, the elderly woman behind the sickness suffered by the men of Gotham. She wants to save Gotham from the blight of men. All of her life she has been betrayed or harmed by men and she wants to cleanse the city once and for all. She became a nurse to heal people, but couldn’t keep up with the carnage men caused. The three heroes try to reason with her, but her mind is made up. With Phase 1 of her plan accomplished and the men are all sick and weak, she will launch Phase 2 which is a gas that will cause a hideous and bloody death.

Amanda Waller and the rest of the female heroes gather at Gotham City Hall. They can’t reach their three companions. They use the GPS history of the ringleader’s car and the disease propagation pattern to locate a likely location for Patient Zero’s Ground Zero – The Blackwell House.

Ivy takes Orphan and heads to the Wayne Enterprises medical lab to work on a cure with Dr. Leslie Tompkins.

The heroes dress in robes and gas masks and head to the Blackwell House. They infiltrate a meeting where the Phase 2 plans are being discussed. They attack the bad guys and defeat them but Muir heads to the basement with the Phase 2 virus. She tells Patient Zero they are under attack. Batgirl and Batwoman free themselves from their restraints and Huntress gives Harley an assist out of her ropes.

Muir and Patient Zero escape through a tunnel. The heroes realize that they are likely to be headed to Sea Side Coliseum where 200,000 sick men are being cared for. They arrive at the stadium which is surrounded by Amanda Waller’s attack teams. They get Waller to agree to give them 5 minutes to avert Patient Zero’s attack before she launches hers.

Ivy, Orphan, and Dr. Thompkins arrive at the stadium with a cure. They need it to be distributed quickly so Gotham Girl takes the diffuser and uses her Superman level powers to fly around the stadium to distribute the healing gas. By using her powers, Gotham Girl shortens her life, but she realizes this is a fight worthy of the risk. A sniper shoots and kills Muir and Waller’s team moves in to control the stadium.

The heroes ask Ivy and Thompkins what is in the cure, they reply it is a powerful dose of Estrogen. The men of Gotham all get the cure. Renee Montoya realizes that not all of the genetically targeted victims are men and heads off to help those with all gender identities. Batwoman realizes that Patient Zero’s understanding of gender as binary has caused unintended problems for some.

Gotham’s saviors, the heroes and almost-heroes congratulate each other on a job well done. Batgirl, Huntress, and Black Canary realize that more good needs to be done in Gotham and leap into their next adventure. The End.

Analysis: At its heart, Julie and Shawna Benson give us a story of women uniting to protect their fallen menfolk. The heroes use their substantial powers both physical and mental to save the day. They all have their different strengths and approaches. Amanda Waller is perfectly happy for things to get messy. Poison Ivy uses her genius level intellect to find a cure. Some fight, others fly. Even though their approaches are different they all pull together to succeed.

Batgirl and the Birds of Prey do not dominate this story, the action is well distributed across the team. Of the Sirens, Poison Ivy is the real stand out here. It is her work along with Leslie Thompkins that really saves the day. The most interesting thing Harley does in this book is to give Joker the antidote, even though both here and us know he doesn’t deserve it.

The artist on this book is Roge Antonio with Marcelo Maiolo on colors and Dezi Sienty on letters. There are some excellent large panels here. One full page piece shows Wonder Woman, Catwoman, Gotham Girl, and Spoiler crashing through a skylight onto the robed bad guys. It is full of energy and the facial expressions on the heroes (except Spoiler natch) show purpose and determination. Another terrific panel is when Wonder Woman gives Batgirl help in getting to the stadium roof. Barbara soars upward in what looks like an orange explosion. Very dynamic. And the final page showing Batgirl, Black Canary and Huntress heading off to their next adventure would make a terrific poster.

On some of the smaller panels the figures and faces are sometimes reduced to very simplistic images. Several faces are interchangeable. If it wasn’t for the specific costumes identifying the supers, it would be hard to tell them apart.

Typically I criticize a story for being too long and milking a good premise beyond its sell-by date. Also, I am not a usually a fan of big team books, typically none of the characters get enough panel time to be interesting. This story arc flies in the face of both of those prejudices. I would have loved this arc to go on for at least another issue. I loved seeing the heroes interact with each other and work things out. I also appreciated the concern with how this virus was affecting non-gender binary people. I thoroughly enjoyed this story and look forward to what this title delivers next.

Final Thoughts: The Manslaughter arc of Batgirl and the Birds of Prey comes to an exciting end as Gotham’s female heroes work together to defeat a deadly virus killing Gotham’s men. Poster-worthy art abounds. Recommended.