Review: Batgirl and the Birds of Prey #18 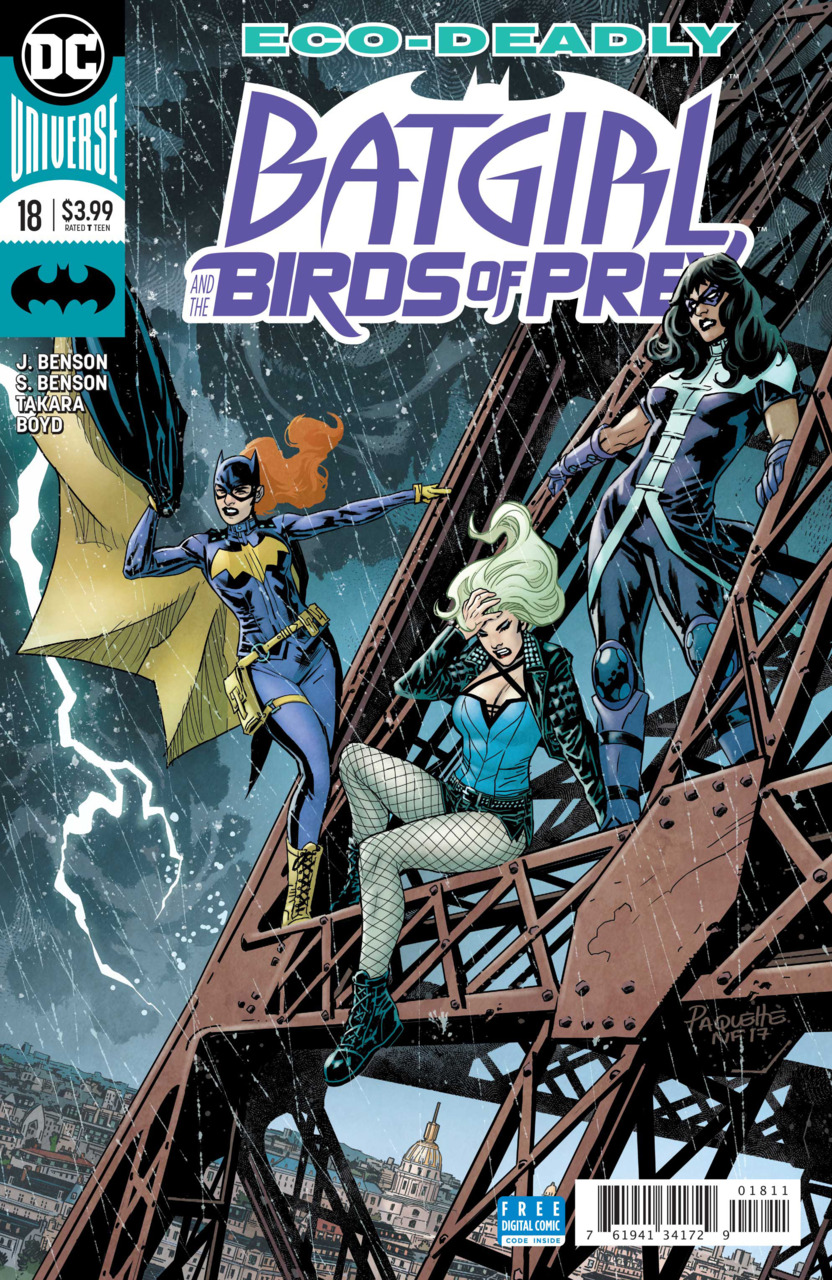 Overview: Batgirl and the Birds of Prey head to Paris to investigate a supplier of dangerous technology to the black market. Have they bitten off more than they can chew?

Synopsis (spoilers ahead): Huntress meets Spyral agent Tiger on a rooftop. When she left Spyral (see the Grayson New 52 run) she promised she would be available in case things came up only she could handle. He tells her about financier Zin Bast who Spyral believes is supplying dangerous technology to the black market. He is attending an energy conference in Paris that Barbara Gordon is also attending. The Birds of Prey head to Paris to check things out.

At the conference Dinah has a make-believe coffee accident during Barbara’s speech which puts her in touch with Bast. The pair go to clean up and get more coffee and talk. Bast flirts with her and she is able to put a tracking device on him.

After her speech Barbara runs into the next speaker, Dr. Alan Yenokida who is working on powerful new battery technology called Hap-E. The lights in the auditorium go out and when they come back on Yenokida and Hap-E and Bast and his crew are all gone. Bast left a device behind that must have caused the blackout.

The Birds get into costume and leap into action. They realize that Hap-E could be used to power some kind of terrible weapon and they follow the tracking device on Bast to a Parisian building. They crash through the window and go to fight Bast’s guys but Bast turns on a device that creates a small localized tornado which allows him and his thugs to escape, though Yenokida is left behind. Bast is using Hap-E to power Weather Wizard’s wand.

They get a Parisian boat owner to follow the boat Bast and his men are escaping in. The crews of the two boats engage in fighting. Bast and the thugs go up the Eiffel tower and the Birds follow them though they are beset by various weather impediments. They reach the top and fight Bast and his men. Bast intends to use the wand to stop a drought for money, or hold a country hostage. Canary stops Bast by using her Canary Cry and Yenokida is able to get hold of the wand and turn it off.

Tiger and Spyral arrive and take Bast and his men into custody along with Weather Wizard’s wand. Tiger asks Huntress to return to Spyral but she refuses. She prefers to be in Birds of Prey, as do I.

Analysis: Writers Julie and Shawna Benson deliver us an international one-shot romp in the City of Lights. There isn’t anything too deep here. The plot is pretty much by the numbers: hear about bad guy, find bad guy, fight bad guy, win. That being said, it is a perfectly good action issue, with the set up spanning five pages and the rest a climbing, racing, and fighting joyride.

It was good to see all the callbacks to previous incarnations of Batgirl and the Birds. The story was very centered on Huntress’ time as Matron in Grayson. But there were also several call outs to Barbara as Oracle and some particularly good references to Dinah’s time as the rock star DiDi in her New 52 book Black Canary. There are some humorous lines as she is recognized several times and she remarks that France loves her just like they love Jerry Lewis. Good stuff.

Marcia Takaro is the artist and Jordan Boyo is on color duty. There are several cool looking large panels of the Birds leaping into action. Sometimes the art can get a little scratchy and hard to make out and a few panels, particularly in the early pages, are colored to look very dark and splotchy which could either be interpreted as moody or sloppy depending on your point of view.

Final Thoughts: This issue is a straightforward action issue that doesn’t break any new ground but is an efficiently and effectively told story. I continue to like this title and am enjoying reading it.