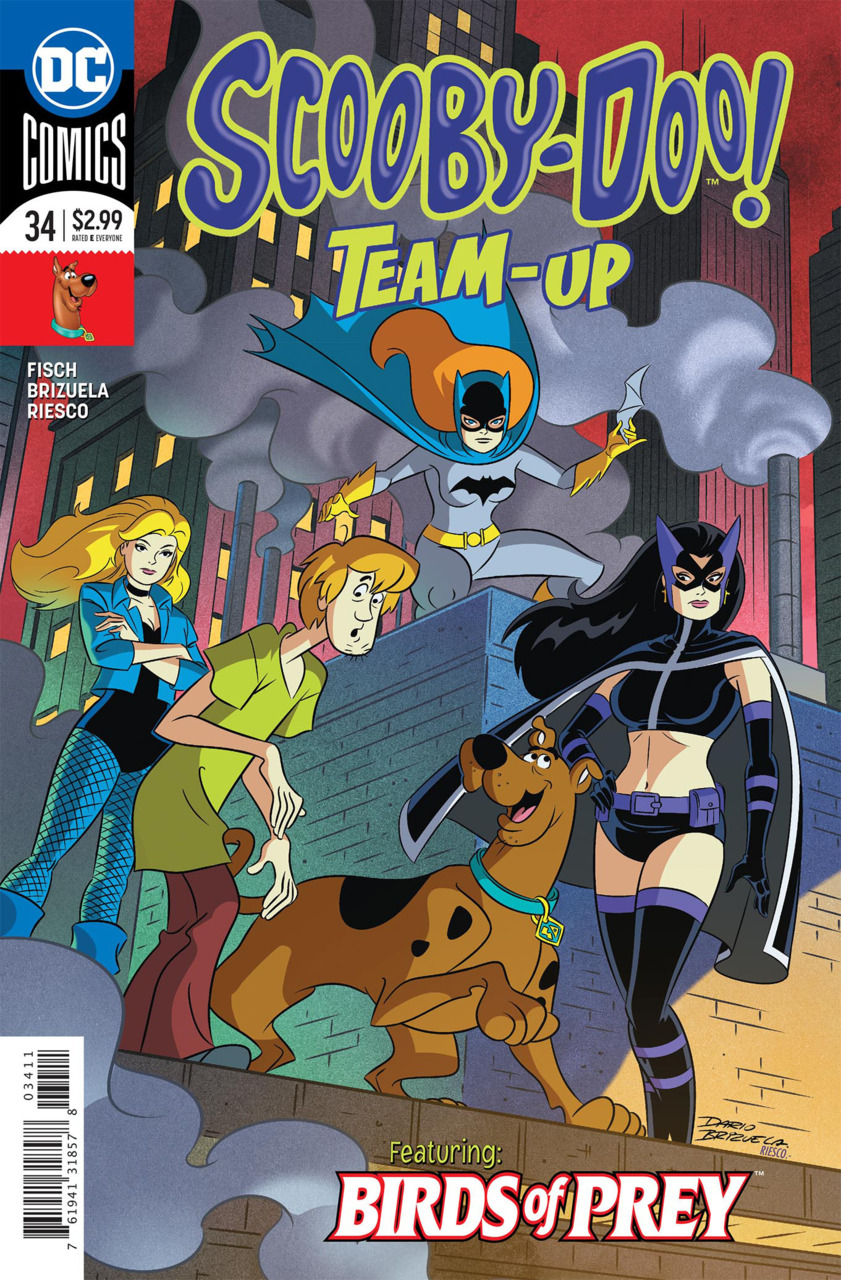 Overview: The Birds of Prey call Daphne, Velma, and Scooby in for a bit of help with a giant bird problem in Gotham.

Synopsis (spoilers ahead): The Scooby gang is searching for the Living Ragdoll in a clothesmaking shop when Velma receives an urgent summons to Gotham for herself and Daphne. Fred and Shaggy send Scooby with the girls, and continue on their hunt, discovering that the doll is a groovy hippie mannequin named Brother Power the Geek.

In Gotham, Daphne, Velma and Scooby find themselves being chased by an enormous bird. Batgirl, Huntress and Black Canary come to their rescue, with Canary screaming to scare the bird away without harming it. Huntress chases it, but it’s vanished without a trace. Batgirl and Canary say that they called the Scooby girls in because of their expertise in mythological creatures, though Huntress has never heard of them.

Daphne and Velma are eager to join, inventing code names for themselves and Scooby (Redbird, The Raven, and Birddog). Working together, they discover that the giant birds have attacked three times previously, each time around the same location as a massive robbery, and surveillance photos showing a suspicious truck. Batgirl hacks traffic cameras to find the truck, and the gang takes to the streets with their motorcycles. However, when they find the truck, another giant bird attacks, this time with lightning powers.

The electrical discharge destroys their bikes, but the Birds of Prey spring into action, calling in Lady Blackhawk in her fighter jet to run aerial interference. Using an electrical net, they capture the giant thunderbird, only to discover that it’s a robot. Two more giant birds attack, and the gang deduces that the Penguin is responsible for the birds and robberies. Using a Batarang, they steal his umbrella remote control, which Velma uses to control the bird robots. Meanwhile, the rest of the gang fights Penguin and his goons, Canary and Daphne each earning the other’s respect for their martial arts prowess. Huntress foils Penguin’s semiautomatic bumbershoot with an arrow down the barrel, knocking the villain out when he tries to fire.

The Scooby van pulls up, and the guys jump out with their new friend Brother Power the Geek. Though Daphne and Velma are happy to have helped the Birds, they turn down an offer to join since they already have a team. Huntress is left feeling a bit of an odd one out next to Scooby.

Analysis: Sholly Fisch is a longterm writer for DC’s all-ages titles, and this week’s offering highlights his ability to write an enjoyable issue with all the required elements from the properties he’s assigned while layering in references for veteran fans. In this case, he ranges freely through to the long history of the Birds of Prey.

In characterization and costuming, Fisch and artist Dario Brizuela pulls off a solid balancing act. Though he was likely not allowed to depict Barbara Gordon as Oracle, instead using her classic, Batgirl Year One style suit, the way she utilizes technology fits well with the Chuck Dixon and Gail Simone era of the Birds of Prey. Canary’s costume uses her trademark fishnet stockings, but her blue jacket seems an homage to her current blue-topped outfit. Huntress has the oddest costume – she has a completely bare midriff, likely inspired by Jim Lee’s Hush design with the belly window (and Gail Simone’s great “700 situps a day” line), but that particular design has not been seen before, in this reviewer’s knowledge. This Huntress, though never identified as Helena Bertinelli, also seems directly drawn from the most common characterization, a hero of action and impulse, often on the outsides of the groups she joins, and prone to using her sharp wits to puncture the conversation with uncomfortable truths. And though she only appears for a few pages, Zinda Blake as Lady Blackhawk in her fighter jet the Blackhawk 1 is a perfect balm to those who are still frustrated by her replacement by Hawkwoman in the current Metal event. The only thing missing from her boisterous attitude is her classic “Hawkaaaaaaa” battle cry.

The sheer number of really well chosen jokes throughout the comic are a delight. From the blending of the past and present when Black Canary tells the Scooby gang about Green Arrow’s whereabouts – including Denny O’Neil’s classic line about “hideous moral cancer” and the current Arrow television series’ catchphrase “You have failed this city,” Fisch shows that all eras of these characters are part of this tale. Thus, when we hear reference to the Simone-era Dove (of Hawk and Dove), or the New 52 Starling, or even the Court of Owls, we see that the history of the Birds of Prey goes deep. Even the interplay between Daphne and Dinah about their martial arts skills is a welcome homage to the character’s history, especially Gail Simone’s delving into her quest to improve her skills under Lady Shiva’s tutelage.

As noted before, artist Dario Brizuela and colorist Franco Riesco make solid, if sometimes unexpected, choices with the line and colorwork for this issue. Though this team doesn’t quite have the legendary status of other Fisch collaborators, such as Rick Burchett and Guy Major, who worked on Fisch’s run in The All-New Batman The Brave And The Bold (particularly the lovely “Calling All Robins” issue #13 of that series, featuring all six significant Robins to that point), the storytelling is strong, and the characters very appealing and on model.

Final Thoughts:  Though not offering any deep insights into character, this adventure highlights the joys of the classic Birds of Prey series as well as the fun hi-jinks of the Scooby-Doo gang.