Review: Batgirl and the Birds of Prey #19 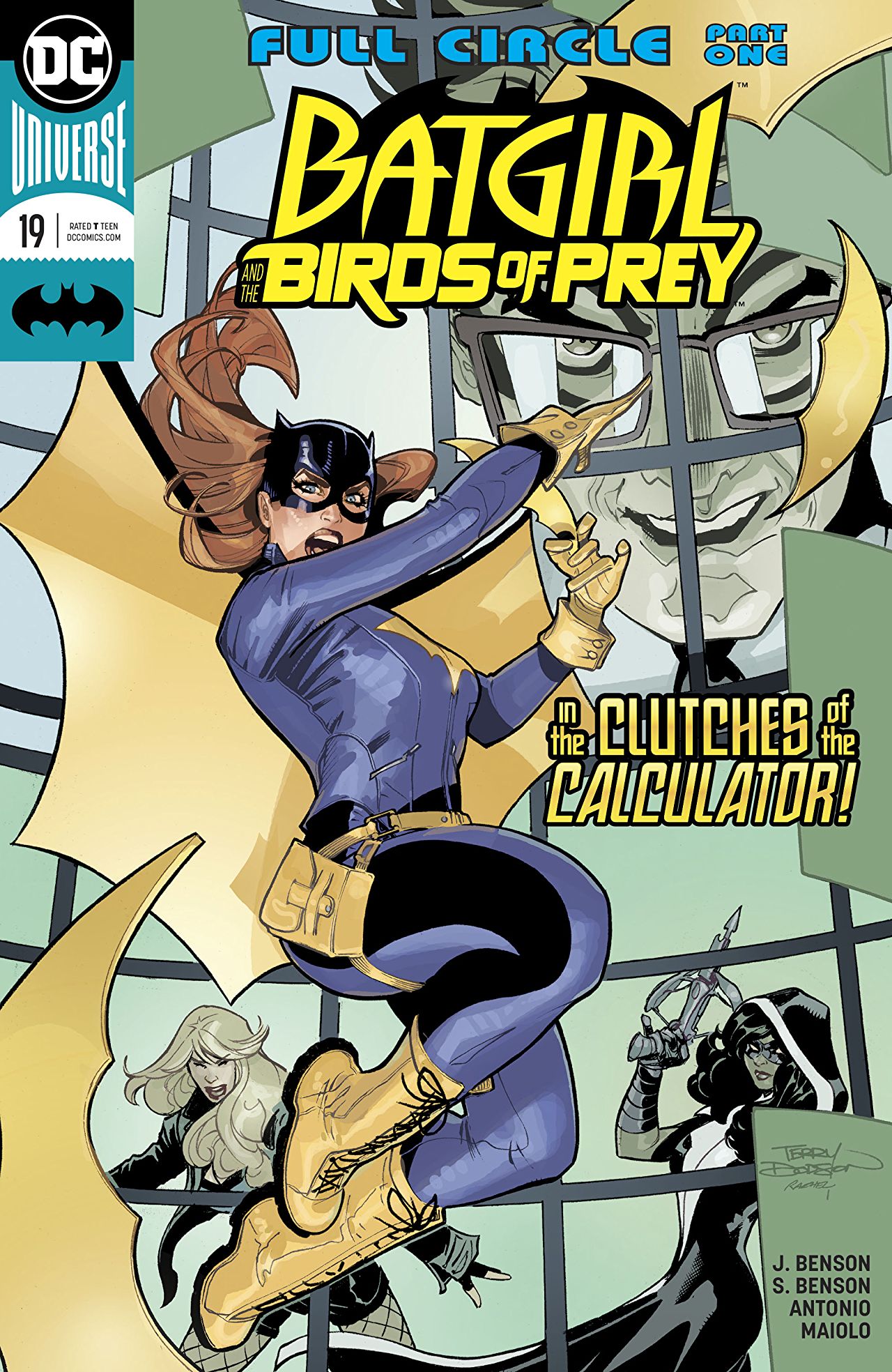 Overview: Batgirl has been keeping a secret from the other Birds and her deceit ends up causing tragedy for one of their friends.

Synopsis (spoilers ahead): Barbara Gordon has hacked into Calculator’s computer system and is intercepting communications between him and his clients. Since Calculator has a wide range of businesses, Babs has been able to get a line on all kinds of bad actors. Black Canary and Huntress are doing the dirty work of subduing the villains while Barbara does her ‘research.’ Dinah and Helena both believe recent upgrades to Babs’ system is responsible for all the new intel they are getting.

She decides to don her Batgirl suit and joins her teammates in taking out some of Calculator’s clients. Suddenly a barrage of bullets falls upon them. They are being attacked by a flaming Robotic soldier called BurnRate who demands to know who Oracle is. The Birds run for cover but Batgirl loses her utility belt in the process. She goes back to retrieve it when BurnRate puts a gun to her head and repeats the question. Black Canary hits the cyborg on the head and throws a smoke bomb so the team can escape under cover.

They realize that the robot was sent from Calculator and Barbara fesses up to her hacking activities. Canary and Huntress are disappointed in Barbara for the transgression and her dishonesty. Babs realizes that BurnRate’s next stop is probably Gus, who was one of their cohorts and actually impersonated Oracle before. Babs leads the team to Gus’s apartment only to find him under attack by the mechanical fire villain. The team tries to fight the robot off but not before Gus is critically wounded. Babs sees him hurt and leaps into action to defeat BurnRate single-handedly. Huntress stops her suicide mission and gets Babs out of the way so Canary can deliver a powerful cry, disabling the robot.

The team huddles around the dying Gus. He hadn’t given any information to Calculator’s creation because he didn’t want to rat out his best friend. He hands Babs a strange looking key, saying it was hers anyway. Gus dies thanking the three for the best time of his life.

Afterwards, Babs destroys her back door into Calculator’s system. Calculator continues to use BurnRate in his nefarious activities.

In Blackgate Prison a girl named Helena goes to visit her Mother who is in jail. The Mom asks the girl if she can forgive her. The girl says it is going to take some time.

Analysis: Writers Julie and Shawna Benson deliver a solid story with high stakes and a decent bit of mystery and intrigue. There are some very interesting concepts discussed here. When discussing their secret identities Babs says that they aren’t keeping their loved ones in the dark. Actually, they are in the dark so their loved ones can stay in the light. Babs is also helping rehabilitate Poison Ivy which is another example of Barbara Gordon’s caring nature, as if Batgirl fans needed it.

There are a few questions that are raised in this story. Why is Barbara’s hacking suddenly bad? Hasn’t she always been hacking into one system or another? Why is it a secret and why would the Birds be upset? She hacks all the time! Perhaps some well-read Oracle fan can point me in the right direction here. Hopefully, it isn’t included here simply as a reason for conflict among the team.

Also, why is BurnRate on fire all the time? It looks cool in a comic book but it doesn’t seem to be a good use of resources.

Finally, who is Helena and her imprisoned Mother? Strange that her name is the same as Huntress’.  Is there some multiple timeline actions in our future? Hmmmmmm.

The art is by Roge Antonio, colors by Marcelo Maiolo, and the letters are by Saida Temofonte. The characters faces are depicted simply but Antonio still manages to capture emotion in their eyes. The colors are sometimes gauzy and other times darker and more sinister. The page where BurnRate first fires on the team has a dramatic contrast between the cool blues of the team talking in an alleyway and the action-packed yellows of the incoming bullets.

Final Thoughts: This is a capable story with a dangerous antagonist. The drama and conflict within the team seems forced and the bad guy robot is inexplicably on fire. I strongly want to know who the girl Helena is and what the next issue’s story will be about.