Review: Batgirl and the Birds of Prey #22 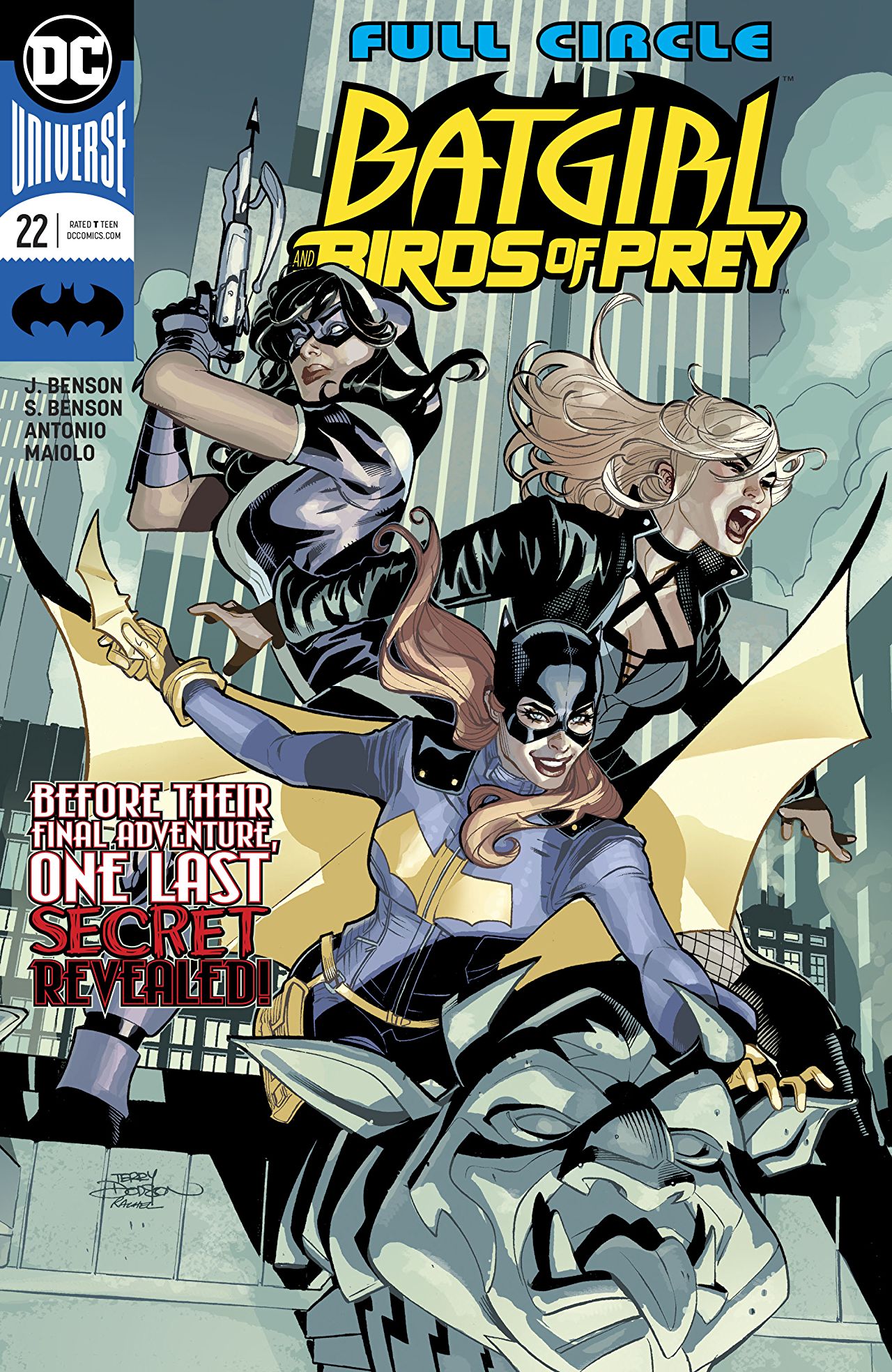 Overview: Calculator closes in on discovering the true identity of Oracle. Can Batgirl and the Birds keeping him from finding out the dangerous secret?

Synopsis (spoilers ahead): Calculator is trying to figure out who Oracle is and has kidnapped and hypnotized Huntress’ Mother, Maria Bertinelli/Fenice, to help him find out. Blackbird tries her mind control games on Huntress. It doesn’t work thanks to Huntress’ embedded Hypnos device. Blackbird gets called a bad name for her trouble. Calculator stops Blackbird from hurting Huntress too much before he gets the info he needs. He also wonders why his mechanical killing machine Burnrate is nowhere to be found.

Turns out, Black Canary has used her out of control Canary Cry to demolish the cyborg demon. She has to revive her nearby friends who include Green Arrow, Batgirl, Catwoman, and Poison Ivy. The Birds send Ollie, Ivy and Selina home, they must deal with this problem themselves.

Batgirl uses Burnrate’s detached head to hone in on where Calculator is. Calculator hooks Huntress up to a machine to fry the Hypnos device so Blackbird can use her magic to find out the identity of Oracle. If it happens to fry Helena’s brain in the process, well, that’s the breaks.

Luckily, Huntress spies a Batarang whizzing past her face that crashes into Calculator’s computer. Batgirl and Canary have landed. Batgirl frees Huntress and Blackbird’s powers are interrupted freeing Fenice from the spell. Batgirl confronts Calculator asking him why he is obsessed with finding out the identity of Oracle. He says that it is because Oracle is a smarter computer whiz than he is. He doesn’t like that.

Calculator shoots Helena’s mother. Batgirl grabs Calc by the collar and tells him that she is Oracle. Canary goes into full Spartacus mode and says that she too is Oracle. Fenice draws her last breath and an angry Helena too says she is Oracle while she harpoons Calculator in the chest.

Blackbird attempts to use her powers but Canary’s cry beats her to the punch. Canary stops short of killing her though. Batgirl and the Birds wrap up the baddies and bring them to the GCPD.

Batgirl discovers the meaning of the key that Gus left behind. It opens a storeroom full of old belongings of Batgirl and the Birds. They look through their old stuff and realize how much they have come through but also how much they have left to do.

The three Super Heroes run off to find their next adventure. The End.

Analysis: Writers Julie and Shawna Benson’s run on Batgirl and the Birds of Prey comes to an end with this issue. The tale of our heroes tussle with Calculator, Burnrate, and Fenice was a reasonably satisfying one. The relationship between Helena and her Mother ended tragically but not before the two came to an understanding. It was fun to see Ollie, Selina, and Ivy in this issue though they didn’t do much other than making fun of Ollie’s snoring. Luckily, Burnrate had been destroyed at the beginning of this issue, the robot with fire coming out of its body didn’t make a lot of sense. Canary getting control over her cry was a good element of the plot that gave her part of the conflict an interesting dimension.

The art is by Roge Antonio, colors by Marcelo Maiolo, and the letters are by Saida Temofonte.  The art is simple with the characters hair doing most of the identification work. The faces are similar but pleasing to look at. There are some clever panel configurations. One such sequence shows three panels of the face of a tied up Huntress. The first depicts her as surprised as she sees a Batarang come into the panel from our left. The next shows, the Batarang right in front of her. Finally, the Batarang leaving the panel to our right while she smiles knowing, as we do, that Batgirl has come to her rescue. It is good visual storytelling and sums up the trust and camaraderie of Batgirl and the Birds.

The colors in this book have an earthy but still wide palette. There are a lot of mustard yellows, oranges, and muted purples. The color helps convey the characters moods in the action sequences.

Personally, I am sorry to see this book go. I wouldn’t say it is my favorite book on the racks, but I sure do like these characters and the Bensons successfully integrated the Burnside-ish Batgirl into the Birds of Prey, which is one of the very top DC teams IMHO. I liked this take on the team and hope to see these heroes together again in new adventures sometime soon.

Final Thoughts: Batgirl and the Birds of Prey finish their run with a good team up that stresses their strength as a team and also as friends. What more can fans of these heroes ask for?