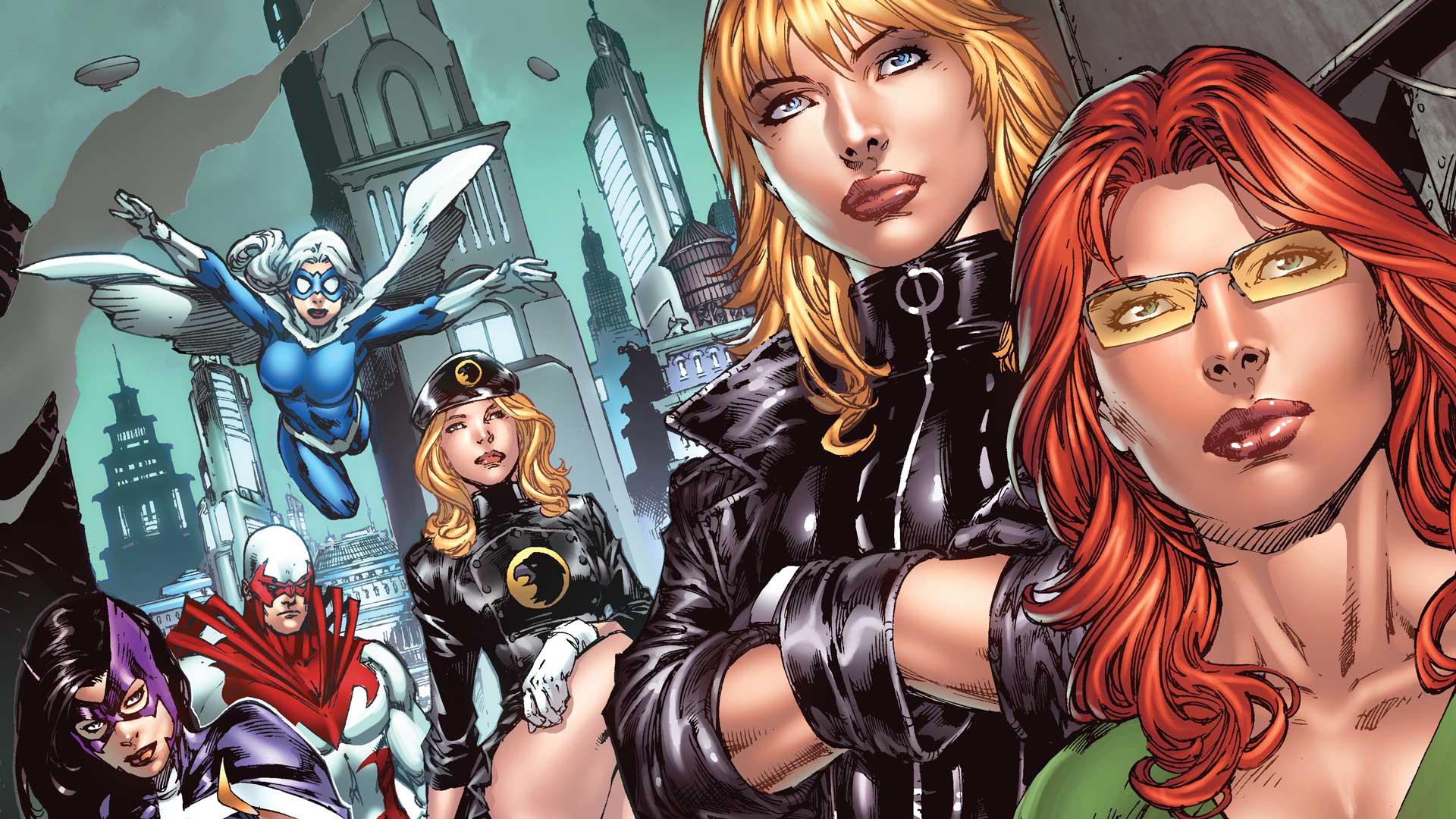 Last month, the last issue of Batgirl and the Birds of Prey shipped to your local comic shops, ending two years of very enjoyable stories about this historic superhero team by Julie and Shawna Benson. Issue #22 serves as a celebration of the entire history of the Birds of Prey as a team, stretching back farther than Rebirth and the New 52. As part of that celebration, we bring you part two (long delayed, my apologies) of our profiles of the Birds of Prey members. Check out part one if you haven’t seen it.

Gail Simone began her run on the Birds of Prey title after two filler arcs by other writers, and from the first issue (#56) the difference was palpable. Instead of the cosmic, time-traveling, or globe-trotting adventures which marked the Dixon era, Simone focused on much more local and psychological threats. Her first arc, “Of Like Minds” was designed to put Black Canary in the familiar position of damsel in distress, but turns the situation on its head – not in the facile, “I have superpowers” way that so many television shows attempt, but with Canary fighting her way back from some of her worst setbacks, reminiscent of Frank Miller’s Jim Gordon in Batman: Year One with her sheer will, pushing past immense pain. This arc also added Huntress to the regular roster, creating a fertile relationship for drama between Oracle and the fiery Helena Bertinelli.

Simone wrote the title for over four years, ending with issue #108. Veteran writer Tony Bedard and journeyman Sean McKeever wrote the rest of the issues until the series ended with #127 as Batman RIP shuffled all of the Bat-titles for several months.

However, the Birds did not return immediately with the Batman Reborn event in 2009. Instead, when Geoff Johns’ Brightest Day Green Lantern event hit stores in 2010, Birds of Prey, once again headed by Simone, re-entered the fray. Though only lasting a year, and despite a few weaker arcs, the run contained a welcome return to form by Oracle, Black Canary, Huntress, and Lady Blackhawk and added new members Hawk and Dove, recently resurrected, to the team. Huntress: Helena Bertinelli was at her lowest point when Oracle called her in to help after Dinah was captured by Savant. Stripped of her mafia family fortune by Checkmate, ostracized by Batman and the rest of the Bat-Family, and possibly even considering herself damned by God, the Huntress nevertheless continued to fight to protect her city and defeat the organized crime families that destroyed her childhood and so many other lives. Oracle managed to get her a job as a teacher, one of her lifelong dreams, and though she suffered many rough moments integrating with the team, the camaraderie slowly warmed her icy, lethal exterior. However, when Helena discovered that Barbara had been manipulating her the whole time, trying to “show her the error of her ways”, she angrily left and conceived her own plan to infiltrate the Gotham mobs and take them down from the inside, enlisting Savant and Creote as her back-up. One Year Later, she finally proved Batman wrong by giving him a massive dossier with reams of information on the mob’s organization, leading to a rare “well done.” Though Dinah’s departure shakes her, she quickly stepped up as the leader of Oracle’s expanded roster and formed a strong bond with Zinda Blake, Lady Blackhawk.

The disbanding of the team probably hit Huntress hardest, as she reopened the question of lethal force. When the team reformed, she also seemingly lost a sense that her own life had value, almost throwing it away in a suicidal attack on Lady Shiva to save Dinah. However, thanks to Dinah’s quick thinking, she earned Shiva’s respect and a new nickname, Iron Owl. Though her romance with criminal Catman threaded in and out of the series, he eventually broke up with her “for her own good.” At the end of Simone’s second run, she earned the position of field leader, as Dinah proved erratic due to personal issues.

Lady Blackhawk: The DC universe’s answer to Captain America, Zinda Blake is a World War II pilot out of time. She joined the Birds initially just as their fun-loving, skirt wearing, pistol-packing pilot, but upon Dinah’s departure, she soon became an extremely valued field agent as well. Huntress formed a fast friendship with her, especially when Zinda’s wartime past came back to haunt them.

From Birds of Prey #117, art by Nicola Scott

Misfit: A spunky teen who burst on the Birds claiming the title of Batgirl until Oracle sternly showed her the consequences of biting off more than she can chew. She relinquished the Batgirl moniker but continued to bother the Birds as Misfit using her extremely powerful magical teleportation/healing abilities. When Oracle figured out that she was homeless and alone, she took her in and trained her. Though Misfit still caused a lot of trouble, especially when Black Alice also joined the team briefly, she demonstrated her desire for justice and family on multiple occasions, usually by yelling her catchphrase “DARK VENGEANCE” before unwisely plunging into danger. Oracle: Update: Babs suffered a crisis when Dinah was captured by Savant, leading to a temporary firing of her friend for her own safety. She added Huntress to the team and went through a painful but excellent arc of trying to manipulate Helena into being a better person until she realized that being a friend is a better way to influence behavior than copying Batman’s playbook. She faced massive threats, such as cybernetic cancer in the form of Brainiac, multiple relocations, a victory over her old rival the Spy Smasher, and a second, disappointing confrontation with the Joker. After the disastrous breakup of the team, she returned to Gotham and was revitalized by befriending and training the new Batgirl, Stephanie Brown. She reformed the Birds in response to the sister of villains from Simone’s first run, as well as Lady Shiva, and chose to “kill” herself to decrease her visibility to the criminal world. Black Canary: Simone clearly loves Dinah – she became the warm heart of the team, as well as constantly striving to become a better fighter. The center of many of the arcs, we learn how Dinah responds to captivity (not well, usually for her captors), her history of training with her sensei, conflict with Lady Shiva leading to grudging respect, and growing friendship with Huntress. Though events outside of the book led to her leaving to marry Green Arrow and lead the Justice League, she would often return until the book ended. When Oracle reformed the team, she also returned, though in a diminished capacity with her personal life in disarray, which Oracle noticed, and finally promoted Huntress to field leader over Dinah.

The New Allies of the Birds From Birds of Prey #117, art by Nicola Scott

Manhunter: A wildcard who like Helena is known to kill her villains, Kate Spencer often caused as much trouble with the group as she solves. First appearing as one of Babs rotating wider roster after Dinah leaves, she suffered a devastating psychic attack when the team moved to Metropolis and leaves to sort herself out. Wears a striking red and silver power suit with a rocket-propelled staff. Infinity: A mysterious member who joins just as the team is breaking up, Infinity has no backstory given. However, her power of “ghosting” through matter often proves very useful. From Birds of Prey #106, art by Nicola Scott

Big Barda: Currently known as Mister Miracle’s larger, louder, punchier, and more beautiful better half in Tom King’s series, Barda assists the team after Dinah’s absence as one of their heaviest hitters. Though she died in another event, Barda’s warm heart and love of combat made a huge impression on her teammates, leading to an entire issue memorializing her. Wildcat: One of Dinah’s favorite mentors, a gruff, loving man, veteran superhero, founder of the Justice Society, and champion boxer. His fists and attitude bring a welcome breath of warmth to the book after the darkness of War Games forces Babs to move the team out of Gotham. Black Alice: A troubled girl who just as often serves as an antagonist, and who indeed joined the supervillain team Secret Six after she left the Birds. A magic user whose main power is switching abilities with other magic-based superheroes or villains, she started out as a bullied high school girl but ended as a powerful but lost figure. Does not get along with Misfit. From Birds of Prey #92, art by Paulo Siqueira

Lady Shiva: Though primarily known as a villain, Cassandra Wusan entered the Birds of Prey’s lives as a fellow student and mourner of Dinah’s sensei. Her admiration of Dinah led her to make an offer – to switch places with Black Canary for a year, serving Oracle in the cause of justice. Though Dinah eventually chose to reject the path of becoming the goddess of death, and Shiva returned to her familiar life as the world’s most terrifying assassin, she still poked her head in to lend Oracle support against Spy Smasher. From Birds of Prey #82, art by Joe Bennett

Savant and Creote: Originally the first villains Simone pits against her Birds, Savant is a former and possibly future attempted superhero whose brilliance is only matched by his insanity (on top of his general lack of empathy is his inability to understand his position in his own chronology, leading him to think he’s experiencing his past or future). Though his evil was immediately evident, Oracle and Black Canary worked with him to try to redeem him after his first defeat, with some measure of success. Though ultimately he does not tread the path of a hero, he no longer uses his considerable skills for evil.

Creote, his enormous Russian bodyguard/enforcer, also harbors a secret love for his boss. Eventually, after the Birds and Creote rescue Savant from enemies who torture him to learn Oracle’s identity, they form a relationship.