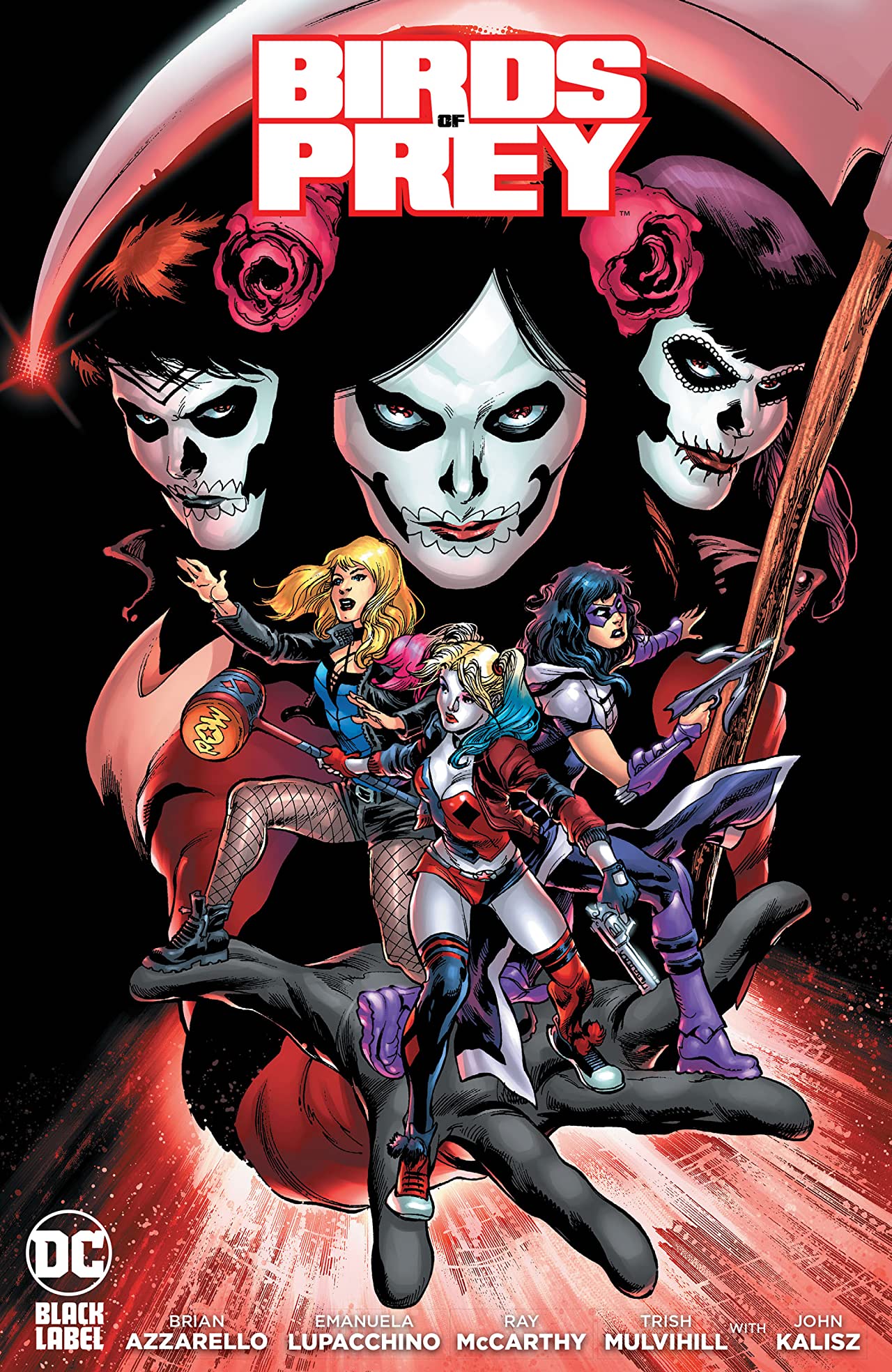 Synopsis (spoilers ahead): Dinah Lance, Black Canary, is woken in her apartment by a phone call from a former teammate and brief hookup, Eric Lagoon, who cryptically warns her of something evil coming to Gotham. We see him decapitated by women with skull tattoos on their faces as Dinah ignores his warning.

Harley Quinn, released from the Suicide Squad, talks to herself on the bus home to Gotham, unsure of what she wants to do.

Renee Montoya meets Helena Bertinelli, the Huntress, under a bridge, where she admits that she’s tired of losing within the police system and plans to fight the drug wars by breaking all of the rules.

At band practice, Dinah struggles to manage her drug-addicted drummer Byron. She gets a call from Colonel Steve Trevor, now Agent Trevor, another former teammate of Dinah and Eric’s. She meets him in a cafe and learns of Eric’s brutal murder.

In a bar, Joker’s clown gang finds Harley and tries to bring her back to their boss, but she beats them savagely and leaves.

Huntress stakes out the drug gangs from a rooftop, shaken by Montoya’s plans, and witnesses the skull women decapitate another person. The head falls many stories and lands in front of Harley Quinn.

Dinah, alone in her apartment again, looks at a picture of her old team, drinking and mourning.

Huntress calls Montoya to let her know about the skull women and sees Harley walk into the murder scene and confront the gang. Huntress swings in and rescues Harley, who jumps out the multiple-story window to escape, but gets the detached head in her face as a reward.

Dinah finds her own bar to try to process her reaction to Eric’s death. She receives a call from her drummer to plead for support in resisting getting high and blows her off in favor of a hookup.

Huntress wakes up, tied to a chair by Harley, and learns of Harley’s release for “good behavior” (deal with the Suicide Squad). Harley Quinn is on a mission to find something new to do with her life without Joker. Montoya arrives but fails utterly to intimidate Harley. Joker and his gang interrupt the standoff, responding to Harley’s defiant insults with a bazooka to the window. They escape into the sewers.

Dinah arrives at her drummer’s apartment to find her dead of an overdose, reacting with a Canary Cry. She meets with Steve Trevor, learning that the cartel which murdered Eric also sold deadly drugs to Byron as part of their takeover of the Gotham drug market.

Harley and Helena clean up at a spa/meeting spot, and Dinah walks in, having been summoned. They get over the awkwardness of Harley’s past, and Dinah gets a call from Steve that Montoya seems to be in league with the new skull women gang. They track her down, and she claims that she’s planning to take down the current drug gangs by using the new gang, then take down the new gang from the inside. They agree on the plan, and they sneak into the next meeting between Montoya and the gang dressed as nuns, much to Catholic Helena’s dismay. The gang tries to behead Renee, but Huntress and Harley intervene, leading to a desperate battle. Joker and his gang arrive, and Steve’s team and the police are on their way. Harley jumps onto the car of the escaping women and manages to kill them all before the car plunges into the river. Renee stays behind, planning to be arrested for her actions in helping the skull women gang and allow her partners to escape.

On the banks of the river, Harley crawls out of the water to find Joker’s bazooka in her face. She manages to make him laugh, sparing her life, but as he walks away, she tearfully picks up his dropped revolver and aims it at his back…

Analysis: According to interviews, Brian Azzarello was asked to write an in-continuity Birds of Prey title to tie into the movie, originally solicited to start in October 2019. The first issue was pushed back many, many times, until nine months after the original project was supposed to be released, receiving a 100-page one-shot. It’s roughly the equivalent to a 4-5 issue arc, and nine months is about the amount of time Azzarello has said he would have written the ongoing series before another creative team took over. So, after 9 months and multiple other Birds of Prey film tie-in comics (such as the Walmart 100-Page Giant anthology, the Amanda Conner/Jimmy Palmiotti Black Label miniseries (still ongoing at this point), and several re-released trade collections), what did Azzarello and artist Emanuela Lupacchino deliver?

First and foremost, Lupacchino, inker Ray McCarthy, and colorists Trish Mulvihill and John Kalisz provide a truly gorgeous rendering of the Birds and this seedy, run-down version of Gotham City. Lupacchino’s faces, always a strong suit, are as detailed and appealing as they were in her breakout book Starfire, her characters’ physicality (attractiveness and action) stands out, and her backgrounds are no slouch. McCarthy’s work gives a layer of polish books rarely see these days – this kind of consistency would be enviable in most other books these days, and a strong argument for inkers continuing to have a place of pride in comic book creative teams. Mulvihill and Kalisz’s colors are melancholy, sun-drenched LA-style noir, never monochromatic, but also never overwhelming. The choice of costumes also is fairly solid – Canary uses her Rebirth blue vest, jacket, and fishnets, Huntress the hooded purple and white flared coat, and Harley a deliberate variation on her Suicide Squad outfit. The book is perhaps one of the most beautiful Birds of Prey books to hit the stands – the extra time and attention gained through becoming a Black Label one-shot instead of an ongoing series served the visuals quite well.

The writing, on the other hand, is a much more mixed bag. Azzarello specializes in dark, gritty crime stories, relying heavily on the tropes that have built up around those types of stories. The Birds here are all very dreary, none of them having significant moments of real life, warmth, or appeal. Chuck Dixon introduced the Oracle/Black Canary dynamic with a cute gag of Dinah pretending to be terrified of the computer Babs sent her and later playing a practical joke on Babs using the webcam. Following Dixon, Gail Simone presented Dinah as an impulsive, warm-hearted veteran hero with a more calculating, but still fiercely loyal Barbara, adding the conflicted but still frequently kind and overwhelmingly heroic Helena. In what would have been a fifth relaunched Birds of Prey series, Azzarello gives us an apathetic, hedonistic Dinah, a flat and dreary Helena, a generic cop-on-the-edge Renee, and a Harley who is more lively than all three of her co-stars but pales in comparison to most other iterations. Azzarello relies heavily on his trademark dialogue compression style to create pacing, using wordplay to create economy and propulsion, but never really giving anyone a strong voice outside of his own. The villains, while striking and macabre, never develop personalities beyond “generic sexy gangster girls,” and definitely never grow interesting motivations. As a result, there’s no real desire to follow this version of the Birds beyond this one-shot. Part of that, no doubt, is Azzarello wrapping up the project instead of handing it off to another team, but even given just the first twenty pages (equivalent to the first issue of the run), none of the characters really have any strong desires or connection to each other that we’d want to spend a lot more time seeing play out.

Though obviously Azzarello broke free of the continuity dictates that a main-universe series would have placed on the character histories, it’s still very clear that he’s relying on a Rebirth starting point – Dinah has her band and military history, both poorly executed New 52 ideas, though the band at least is a brilliant starting place that’s only seen truly excellent execution in Meg Cabot’s Black Canary: Ignite graphic novel for kids. The Black Label rating freedom is also fairly dull – though harsh language abounds, there’s nothing clever or passionate in the way it appears in the dialogue, unlike the way shocking language is used in the new Harley Quinn animated series, and the violence, though copious, is well within the expected adult action fare you’d see in a crime film today. Though the Birds are all drawn as incredibly beautiful women (as they always have been), and the sauna scene gives an uncharacteristically warm view of the women in a more sexualized context, there’s no nudity – DC still apparently shies away from any serious nudity after the debacle of Batman: Damned. The technical aspects of the book are also a bit of a letdown – the lettering is awkwardly tall, leading to distraction while reading, and grammatical errors (“effect” instead of “affect”, “ringer” instead of “wringer” in the solicitation) give a sense that there wasn’t enough care taken in the details outside of the pencils, inks, and colors.

Despite all these drawbacks, Azzarello does produce a very readable script, and paired with Lupacchino’s storytelling, the book reads smoothly from start to finish. The production is like a polished prestige crime drama, with a strong setup and payoff for all four Birds in their journey from beginning to end. On a construction level, though it’s certainly much less friendly and heroic as the recent Batgirl and the Birds of Prey series, it also has more nuance and detail given to the characters. Ivan Reis provides the main cover, a surprisingly sketchy rendering of the three costumed Birds with the villainous gang girls hovering overhead (pun intended, in honor of Azzarello’s wordplay style). J.  Scott Campbell provides the variant – a shame they didn’t use the originally solicited Luppacchino cover, which provided a beautiful rendering, though perhaps an awkward placement of Harley.