Review: Batgirl and the Birds of Prey #5 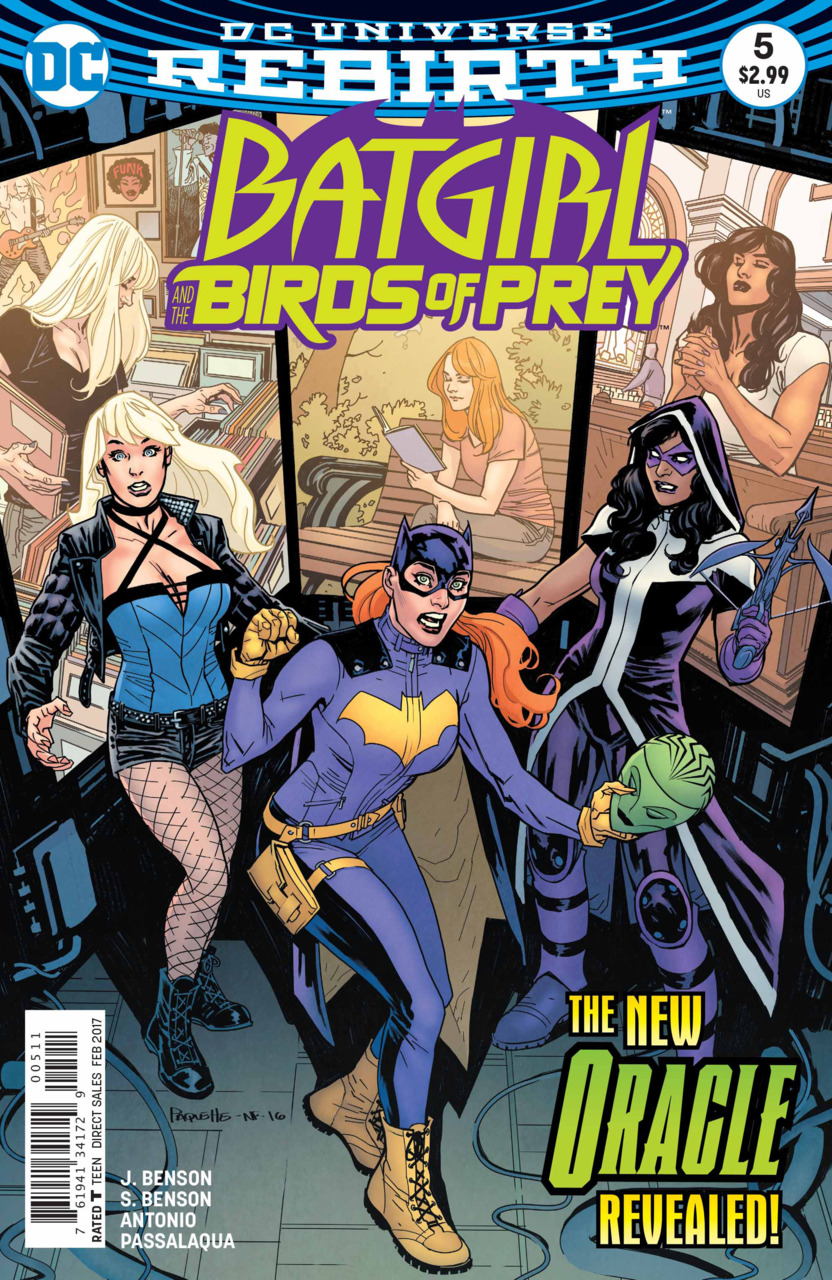 In Brief: The imposter Oracle comes “Into the Light” for an issue full of big reveals.

Summary (Spoilers): In Oracle’s Lair, the Birds are confused by what appears to be evidence of a Batgirl stalker. They are interrupted by the entrance of the Oracle imposter himself, Gus Yale, number one BOP fan. He protests that he wants to help them, not fight them, and proceeds to attempt an explanation for all of the trouble he’s caused them for the past five issues. Though Gus knows all of the Birds’ secret identities, Babs is relieved that he believes Batman is probably six different guys, and allows him to continue in this fantasy.

Though Gus has an answer for every accusation – claiming to have either been throwing challenges he knew they could overcome, or just helping his mob bosses to make ends meet, he shares that when Babs was Oracle, he did help her as a hacker with some coded Russian files. When Babs regained her mobility and took up the Batgirl mantle again, Gus recounts the speculation and deep sense of loss the online community felt, as well as some wacky speculations. Inspired by the void Babs left, Gus managed to locate her old databases, and set himself up as a new Oracle – but his first clients were the mob.

As they talk, Gus’s explanation is cut short by a notification of Fenice’s whereabouts. He begs Barbara to let him join the Birds, and she sends Dinah and Helena to intercept Fenice while she runs operations, to keep an eye on Gus. As the team closes in, Babs reclaims the title of Oracle, and notices that Gus was donating a large percentage of his mob earnings to charity, leading to a reevaluation of his character. This revelation is cut short by Helena’s larger awakening to the fact that Fenice is her mother.

In Depth: The cover by Yanick Paquette, featuring all three of the heroines of our series, brilliantly captures all three of their histories and characters in their dual identities. Though as other reviewers have pointed out, Dinah’s past photo reflects her recent history, there’s a real sense of richness to the characters as Paquette renders them, not just being superheros on motorcycles all the time. Thankfully, the Bensons seem determined to carry this richness over to the interiors.

For the past few issues, each main character has gotten major flashbacks fleshing out how their character came to the new Rebirth continuity. Dinah’s history from the New 52, with an American sensei, is blended with Gail Simone’s sensei who called her “siu jerk jai,” little bird. Though Helena’s backstory appeared in glimpses like the Grayson Annual #1, last issue did a strong job of retelling her family’s origin. This issue provides the backstory for the new Oracle, Gus Yale, and it has a hefty job to do.

Most outlets seem pretty underwhelmed that instead of bringing in an expected villain like Calculator, or even an undercover ally like Frankie or Wendy Harris, the Benson sisters have provided a brand new character to serve as the Birds of Prey first big bad. However, a new character allows the Bensons to write something perhaps a bit more interesting than a megalomaniacal antagonist, or even a secret ally of the superheros could: a look at the impact of Oracle on the non-cape crowd. Gus’s memories of helping Oracle, and his despair at her loss, are poignantly written and drawn in this issue, and just as we see Batgirl being inspired by Batman in her hospital visit to Kai over in Hope Larson’s series recently, here we see Oracle inspiring others to become more than themselves. The primary power of superheros is in their inspiration – as Batman Begins puts it, you must become more than a man to have any impact on the problems facing our world. You must become a legend – and Gus gives us a glimpse into how a legend operates on someone not brought into the vigilante business as a youth.

The detail that Gus has been providing the captions for the series is amusing, though it does bring up the question of how big a role he will play going forward. The previous runs of Birds of Prey struggled to find a way to incorporate male members onto the team. Sometimes, there were strong supporting roles, like Ted Kord, Jason Bard, Savant, and Creote. Others, there were near-catastrophic missteps, like Condor and Hawk (and to a lesser extent Dove). The Birds function best when they have a relationship built on growing trust, with some setbacks to provide an ongoing emotional thread, such as Babs and Helena’s conflict over manipulation. Adding a member like Gus could provide a fan supporting role, but it’s clear his moral compass is too compromised to be part of the growing trust between Babs, Dinah, and Helena. The Bensons have shown a good grasp of relationship judgment, so hopefully that continues as Oracle finds his place in the title, as we know he will continue to work with the team from future solicitations.

The continuity references are inspired, from the obvious ones like Gus’s speculations on Dinah and Helena’s recent history (Black Canary band and Spyral implant), to some more subtle ones, like Gus’s last name, Yale, being a fitting homage to Kim Yale, co-creator of Oracle with John Ostrander. Along with these references and explorations of the Birds’ Rebirth-i-fied history, there are new plot threads, like Helena’s mother being their mob foe. Though this revelation was clearly setup at least three issues ago, Helena’s facial expression at the end provides a solid impact for a last page bombshell.

Roge Antonio’s work on this issue doesn’t quite impress as much as his previous work for the series. The first few pages feel a bit rushed, with facial and figure work that doesn’t match the previous level of care he brought to his pencils. However, by the end of the pages, his lines regain their polish, and the whole thing is, as usual, gorgeously colored by Allen Passalaqua. The greens, blues, and purples of the dark, mob-and-noir infused settings provide an incredible atmosphere.

One issue left to conclude this walk down memory lane and vehicle to the future of the Birds. The Bensons have given Babs, Dinah, Helena, and the Faux-ricle each a full issue of backstory and exposition, and the whole story is poised to deliver a worthwhile conclusion. Despite a slightly lower level of quality this issue, things look bright for the Birds’ future.

Pick up/Pass? If you’ve been collecting up to this point, this issue is worth getting to complete the story. Otherwise, it’s probably fine to wait for the trade.

In Conclusion: Though a slight dip in quality mars this issue, on the whole, a very nice look at the impact of our heroes on the non-costumed population, and a solid lead-in to the finale.