Review: 100 Things Batman Fans Should Know and Do Before They Die 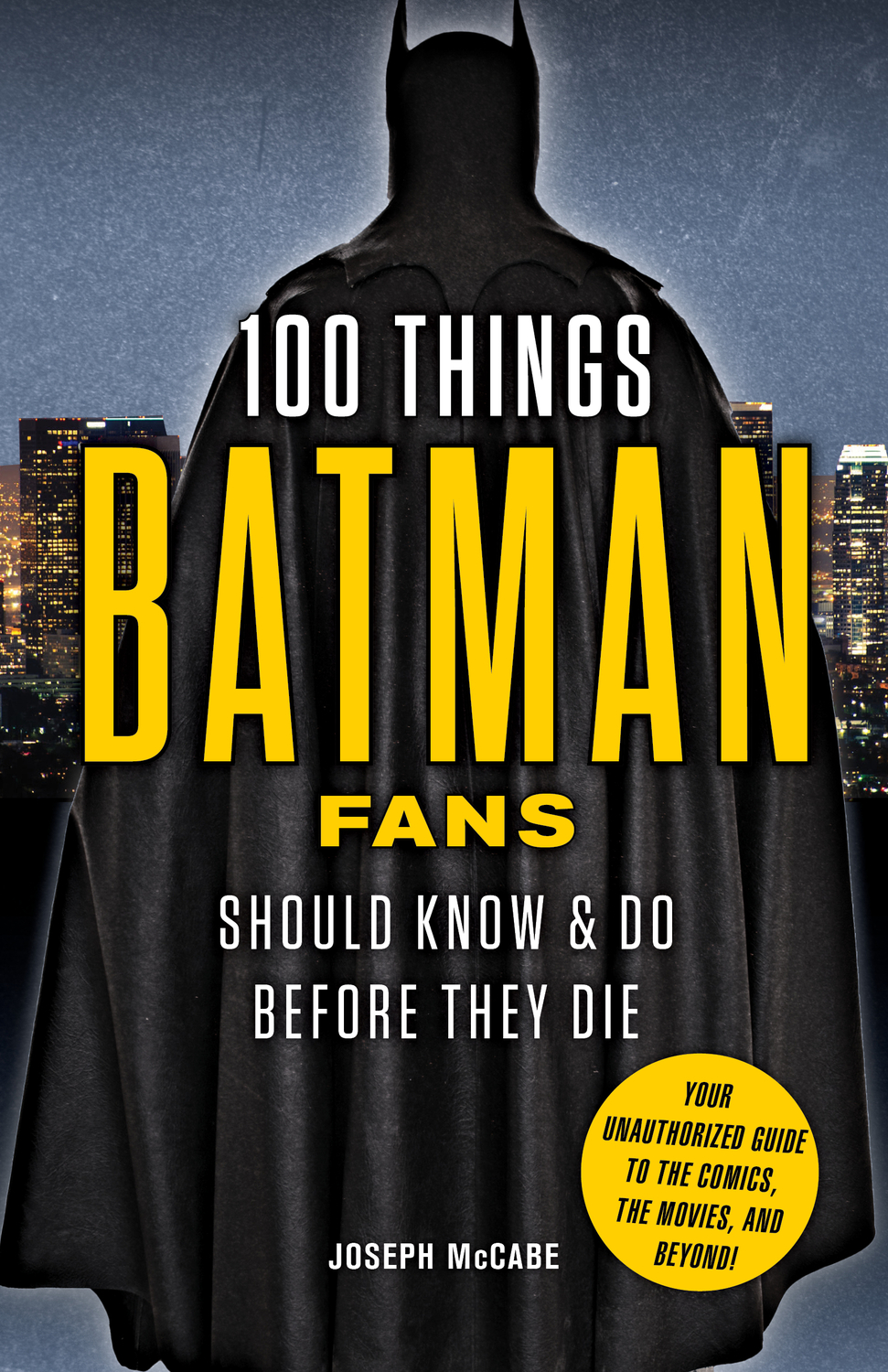 DC Comics’ famous character Batman is credited as having once said “It is not who I am underneath, but what I do that defines me.” This simple statement serves as a summation of what Batman is–not just a vigilante in a costume and mask, and not even a man, but instead an ideal and an icon. It is from this ideal that fans manage to come to Batman and in turn the character’s extended fictional world. However, where do fans turn when they want to learn more without spending far too much time and money to explore more than 75 years of history across multiple forms of media? Luckily these fans have an answer in the form of the new book 100 Things Batman Fans Should Know and Do Before They Die.

Written by Joseph McCabe, 100 Things Batman Fans Should Know and Do Before They Die is a tome of knowledge that details characters, concepts, spin-off media and other aspects related to Batman that fans both new and experienced can find enjoyable. McCabe details major milestones in Batman history from both the fictional narrative and from the creative side. With over four hundred pages of information, the book is certainly not lacking in facts and figures.

However, McCabe didn’t set out just to give a simple “This happened and then this happened” chronological history of the Batman franchise. Instead he moves from topic to topic and blends both fictional and real world details related to said topic. For example, early chapters focus on Batman’s origins both in and out of comics, but later chapters bounce around between talking about the Batmobile, the 1960’s Batman television series, the various Robins, etc. The information given is basic enough to be easily grasped by a newer fan but also detailed enough to be enjoyed by long-time Batman fans.

The true highlight of this volume is easily the amount of interviews that McCabe has managed to acquire. From creators like Neal Adams and Carmine Infantino, to actors like Adam West and Lee Meriwether, to director Christopher Nolan, the interviews bring a new sense of enjoyment and sometimes previously unknown (at least to this writer) information about the creative process involved in Batman’s history.

While the book excels at bringing detailed and accurate information to the readers, there are a few drawbacks. The book is highly up to date, detailing media as recent as 2017, but instead McCabe shows a strong prevalence toward the Nolan Batman films. Other movies get mentioned and have their own sections, but McCabe references the Nolan trilogy of films much more often than the rest. This may not be ideal for all fans.

Also, while the book is titled 100 Things All Batman Fans Should Know and Do Before They Die, the “Do” aspect is severely lacking. Aside from the obvious “read all the stories and watch all the adaptations discussed” aspect there are only seven sections about doing something, and one of those is “Dance the Batusi.” It begins to feel like Mr. McCabe started to reach a bit before completing his list.

Overall this is an excellent volume for reference. McCabe discusses Batman lore like a seasoned veteran. The interviews alone make this worth the read. However, this isn’t a book for somebody looking to reshape their Batman paradigm. There are wonderful ideas about how to make yourself more connected to the franchise, but honestly this is mostly a book of Bat-facts. McCabe has organized them all for us in a nice neat package that is nothing less than enjoyable to read, but there is not much that is new or different for the overly-experienced fan to find.

Editor’s Note: 100 Things Batman Fans Should Know and Do Before They Die released on October 15. You can order your copy of the book over on Amazon now.