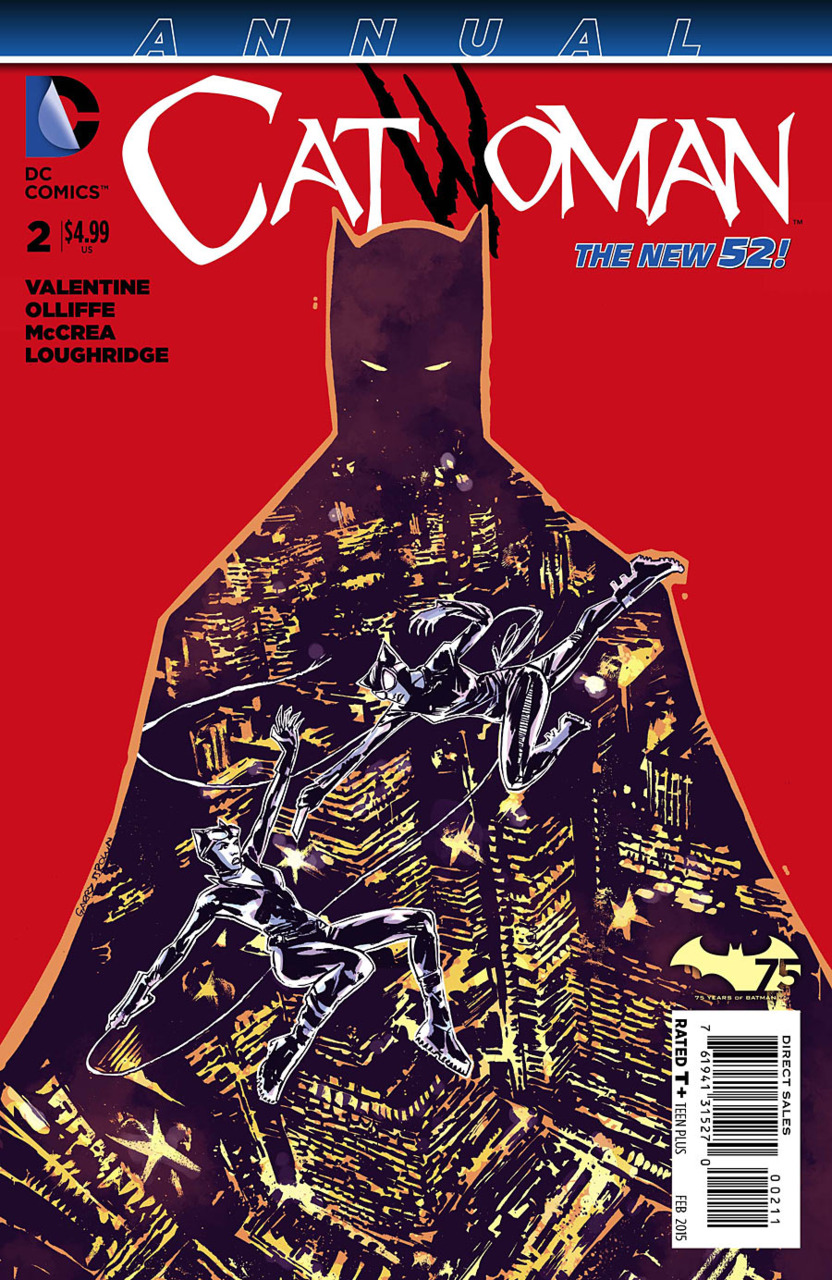 Our annual opens with Eiko Hasigawa meeting with a group of men at the Gotham docks, when suddenly several alarms and lights activate. Catwoman suddenly appears and apologizes for “accidentally” tripping the alarm. Eiko’s monologue talks about how this was the first time she encountered Catwoman, and how this meeting changed everything.

The next day, Eiko meets with her father to discuss the events down at the docks and we are introduced to another potential candidate to take over the Hasigawa family…Eiko’s second cousin Ken. Eiko’s monologue describes how she and her father like to play an ancient Chinese game called Go and that her father has not lost in 30 years…where she hasn’t won yet. She views her father’s nomination of Ken’s possible succession has just another version of the game that they play. Eiko and her father discuss the failure at the docks and who was responsible, Eiko commits to finding Catwoman.

Some time later, Eiko has been attempting to find and follow Catwoman and one night she succeeds after finding her battling Batman. Ken is with her and after Catwoman flees across the rooftops, Eiko pursues her while Ken decides to remain behind. She eventually follows Catwoman back to her hideout and witnesses Selina taking off her mask and revealing her face.

Back with her father, she reveals that she knows who has been disrupting their affairs and Eiko tells her father that it shouldn’t take long to track her down. Her father questions what Ken could have done to help, and poses the question of Ken’s fate to Eiko…either he returns home in shame, or to have part of his little finger removed. Eiko leaves and makes the decision to spare Ken and send him home. Over the course of time, Eiko notices that Catwoman seemingly disappears and Selina starts to take center stage as the events of “Batman Eternal” unfold…Selina Kyle is named the new head of the Calabrese crime family and starts to unite all of the families under her.

Eiko continues to watch Selina as she pulls her strings and wonders what type of con she may be pulling, and also why she has chosen to retire Catwoman.

In the continuous game between Eiko and her father, she chooses to create her own outfit and take to the rooftops as the new Catwoman…with the plan to disrupt her family’s goals. She succeeds when she manages to sway the loyalty of one of Gotham’s gangs to the Calabrese family rather than her own.

We than are treated to a series of images where we see Eiko continuing to watch Selina, but this time as a member of the families…she also continues to train and venture off into the night as Catwoman, hard set to find out what Selina Kyle is really up to. She eventually crosses paths with Batman herself, who warns her that Selina might not take too kindly to Eiko taking up her mantle.

The issue closes with Eiko returning home and getting informed that Ken has been taken care of…and that his weakness will no longer bring their family down. Eiko silently vows that even though her father had used Ken to get her he has still lost this particular game…and that she is about to start a whole new one.

So a lot happened in this issue…and most of it has little to do with Selina Kyle herself, it however revolves around the origin of how Eiko Hasigawa becomes the new Catwoman.

It was very interesting to see the inner workings of the Hasigawa family, specifically the power play between Eiko and her father. These characters seem to be in a constant mind battle with one another throughout the issue, trying to one up each other and play this “game.” Eiko tries to disrupt her father’s wishes and begins posing as Selina and swaying favor over to the Calabrese family, while her father attempts to use Eiko and Ken’s good relationship to force her to make tough decisions. Ultimately Ken pays with his life, and Eiko swears to start a whole new game…which I am definitely looking forward to seeing played out.

Overall this was a pretty decent issue, and gave some unique insight into the Hasigawa Family, how Eiko takes on the mantle of Catwoman and how Selina started to gather her forces and unite the criminal underworld. A very good companion piece to the ongoing Catwoman storyline in the monthly title. However it would have been nice to shed some more light on Selina Kyle, as she is the title character of the book…however this could something planned down the road in “Eternal”…guess we will have to wait and see.