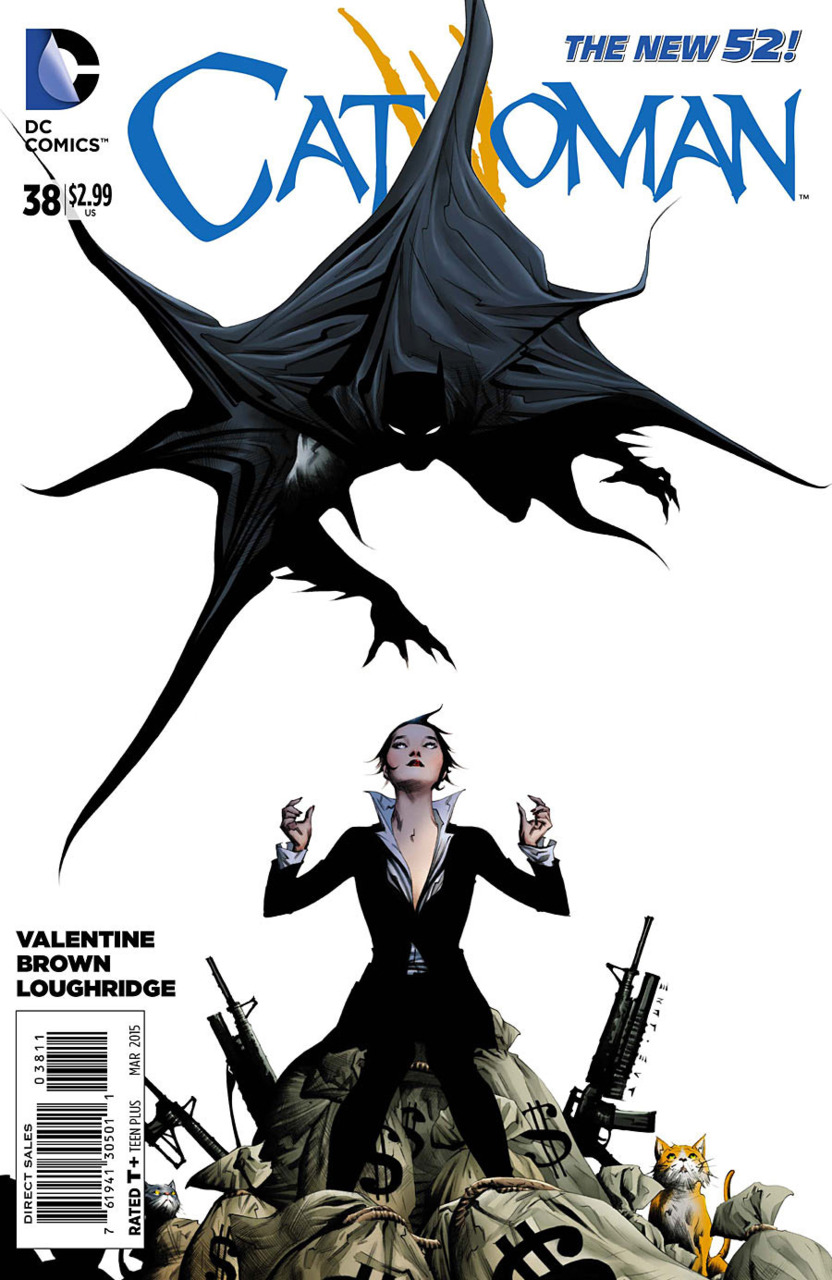 Our issue this month opens up in the aftermath of last issue. Selina is still reeling from the betrayal within her own family and having Antonia kill her brother…however business must still push forward. During a meeting to confirm the finer details of the weapons deal discussed a few issues ago, Selina receives a message from Black Mask for a meeting with “no weapons.” Selina decides to attend the meeting and see what Sionis wants, and leaves Antonia behind to keep an eye on things.

Across town, Selina meets with Black Mask and Aiden Mason. Mason attempts to sympathize with Selina by commenting that it must be tough for Antonia to lose her brother. After some verbal sparring between the twin, some of Sionis’ men draw their guns but Selina quickly pulls off her shoe and hurls it at one of the guards…embedding his hand into the wall via the shoe’s heel. Selina then leaves as Sionis has nothing more to discuss with her. As Selina gets in the car with Ward, she asks if Hasigawa’s daughter will be present at the docks that night…he replies yes and Selina tells him to cancel that, and then prepare to burn everything.

That night, the docks are busy with Selina’s men who are loading the illegal weapons on a cargo ship. Antonia and Selina discuss the progress they are making and Selina leaves to get some air. As she watches from the rooftop, the cargo ship leaves the dock…and she is suddenly confronted by Batman. Batman admits that he needs to take her in, but Selina only responds that he needs to count to three. Suddenly, the docks are filled with many police cars and the cops start to apprehend everyone below. Batman and Selina have a brief fight where Selina comes up the victor. Selina tells Batman that there isn’t anyone here for him and that the bond between them is essentially broken.

The two are interrupted by the new Catwoman, Eiko Hasigawa, who drops down onto the roof in-between them. Eiko explains she is there to stop the weapons deal, but Selina interrupts that that is why they are all here. She asks her to leave “before this becomes something [she] can’t fix.” Eiko departs so she can call off her father’s men to prevent them attacking the cops, while Selina tells Batman to leave. Batman responds that she isn’t what she has to be and to not give up, she replies ‘I’ve lost. Just give up on me. I know you’ve had practice at that.”

Sometime later, Detective Alvarez and his partner are escorting Antonia and another Calabrese operative to GCPD lockup. Antonia asks how they knew about the weapons deal, and she gets a response that it was an anonymous tip. Ward soon arrives to get the Calabrese operatives out of jail and take them home. Antonia discusses with Ward that Selina will not be able to get away with what she did…by the other families or the police, Ward responds that Selina is on her own.

The issue closes with Black Mask surrounded by several members of the other crime families, including Eiko Hasigawa who was sent by her father. Black Mask proposes a new union between himself and the others so they can work as a diplomatic group, rather than the dictator of the Calabrese family. We then see one of the members leaving the meeting and reporting back to the Penguin regarding what has transpired. Finally, we see Selina stepping out onto the street and getting saved by Aiden Mason before she is struck by a car. He asks if that was deliberate or not, and she responds by asking if saving her was deliberate or not. As Mason walks off into the night he replies with, “what are brothers for?”

As always this new run on Catwoman delivers a very intense and complex story all at the same time. The writing continues to be one of the highlights in this story arc, especially the quotes that get used by famous (and often deadly) woman throughout history that have opened and closed the last several issues – Lucrezia Borgia and Elizabeth I (just to name two). It’s interesting to see that comparisons made between Selina and these women in each issue, Selina even makes a mental comment on Elizabeth I who killed members of her own family and how she never came to terms with it…something that she deals with throughout this issue.

It’s interesting to see how Selina’s plan is evolving and changing through the machinations of her opponents, and she has to constantly change and adapt to what is thrown at her. I’m not sure if the weapons deal was something that was initially planned to fail from the beginning…but it appears that Selina has had to sacrifice her footing in order to accomplish some other goal.

And who can forget the big reveal at the end…Selina has a brother?! I’m not sure if this is real or not yet, as we only get this information on the last panel…but it would be interesting to see if Mason turns out to be her brother and what will transpire when Selina and Black Mask face off against each other.

Overall this story is working its way to being a truly unique and well done “Selina” story…rather than Catwoman. And I actually like that this book is focusing more on the woman outside of the costume, rather than all of the books which focus on the characters with their masks on.