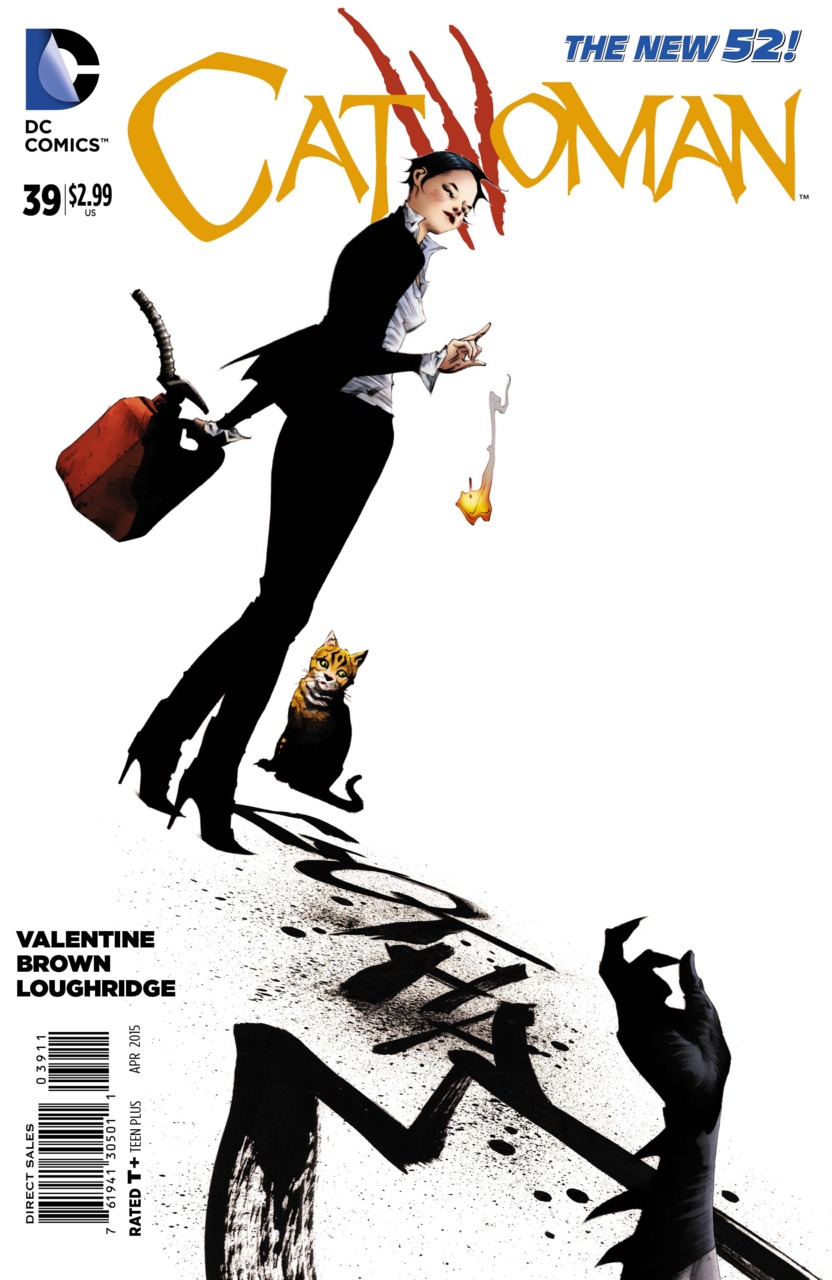 Our issue opens with images of Black Mask and Mason continuing to tighten their grip upon Gotham City, meanwhile Selina discusses with Ward on how Ascolat Inc (Black Mask) has picked up even more territory…specifically from the Hasigawa family, meaning that they have likely joined up with Sionis. Selina also instructs for her family to make several large monetary donations to several charities in order to prevent Ascolat from becoming the new “face” of Gotham.

Cutting to Black Mask, he discusses with the other family members on taking Selina out of the picture, but the member of the Falcone family suggests that killing her might create a martyr…Sionis however believes that a martyr can only be created if they are remembered. Ultimately the families agree unanimously to have Selina Kyle killed. As the members leave, one of them places an anonymous tip with the GCPD regarding the plan to kill Selina.

Sometime later, most of the major family members are present at a charity event where Mason and Selina are being honored for their generous donations. Suddenly during the speeches, the Falcone family member pulls a gun and attempts to shoot Selina. As the gunman takes off, Selina warns a nearby Bruce Wayne to remain under cover…meanwhile a GCPD detective and Antonia Calabrese take off after him. On the rooftops above, Catwoman (Eiko Hasigawa) pursues the Falcone gunman and a gunshot is heard…Antonia and the detective round a corner to find the man dead.

After these events, Selina can be seen discussing with Ward and Antonia about what had just occurred…Selina ends up firing Antonia and explains that if anyone is to survive the coming war, then Antonia should be that person. Later, Selina ends up meeting with Mason and discussing the revelation from last issue – the fact that Mason believes himself to be Selina’s brother. Mason also explains that he was brought onboard with Sionis in order to broker a deal with the families…not see Selina killed. After merging with Sionis, Selina would be considered a valuable lieutenant…but Selina sees that this would give access to the leadership of the Calabrese family – namely that Mason could usurp her position.

Due to the information provided by the informant, the GCPD eventually come to arrest Black Mask for the attempted murder of Selina Kyle. After bringing him in to custody, the detectives are ordered to release Sionis due to a lack of evidence.

We then cut to Eiko Hasigawa coming to meet with Selina and they end up discussing if Eiko knew about the attempt at killing Selina. Even though she would make a good hostage in a potential war, Selina allows Eiko to go free and then talks with Ward about her options – either take the deal with Sionis and the Calabrese family becomes nothing…or go to war and Gotham City burns.

Sometime later, Catwoman approaches Lewis (the family member who tipped off the GCPD…and is also working for Penguin – seen last issue) and they discuss about who Lewis is actually working for, and how Black Mask may kill him if he finds out the truth. Eiko leaves and then meets with her father as he informs her of Black Mask’s arrest…and how he believes Selina turned him in. Ultimately this will lead to war and he has pledged his loyalty to Roman Sionis. We then cut to Eiko (as Catwoman) returning to Selina’s penthouse. She informs her that the Hasigawa’s have sided with Sionis and that war is coming. As Eiko warns Selina to be careful, she kisses Eiko who then wonders if the kiss was meant for her or the Catwoman suit. As she leaps into the night, Selina wonders herself if she would want to know that answer once this situation has ended.

As the issue closes out, we see Penguin meeting with Mason and Black Mask and informing him that he can help with the situation; Selina meets with a different Falcone family member who apologizes for the other trying to kill her…however she retaliates by handcuffing him and informing Ward to let the Falcones know about her hostage. The last panel shows Selina telling Ward to have Mason be the one to negotiate the hostage transfer and closing on a picture of Selina standing atop of gargoyle overlooking the city.

This month’s “Catwoman” issue is clearly setting up the finale of this story arc which we are getting the conclusion to next month. As always, this series has taken a much needed turn that allows Selina Kyle to become a much bigger and more powerful character than ever before. As I read this story, I keep getting images of The Godfather and it really intrigues me to see Selina and Roman Sionis beginning this massive gang war for control over Gotham City…I wonder if this story will have the same consequences as the last time Catwoman and Black Mask faced off – Sionis ended up dead (this of course refers to the “Backward Masking” story seen in “Catwoman” before the New 52).

One thing I am hoping is that “mob boss” Selina sticks around after this story is over…even though I do miss the femme fatale Catwoman, it is definitely nice to see Selina out of the costume. Speaking of, I am really intrigued by the relationship between Eiko and Selina…a little bit out of left field, but it is interesting to see Selina being involved with someone who isn’t Batman…and strangely enough it is with someone masquerading as Catwoman herself.

Overall this was a pretty decent issue, although it lacks some action due to a lot of verbal dialogue setting up the finale.