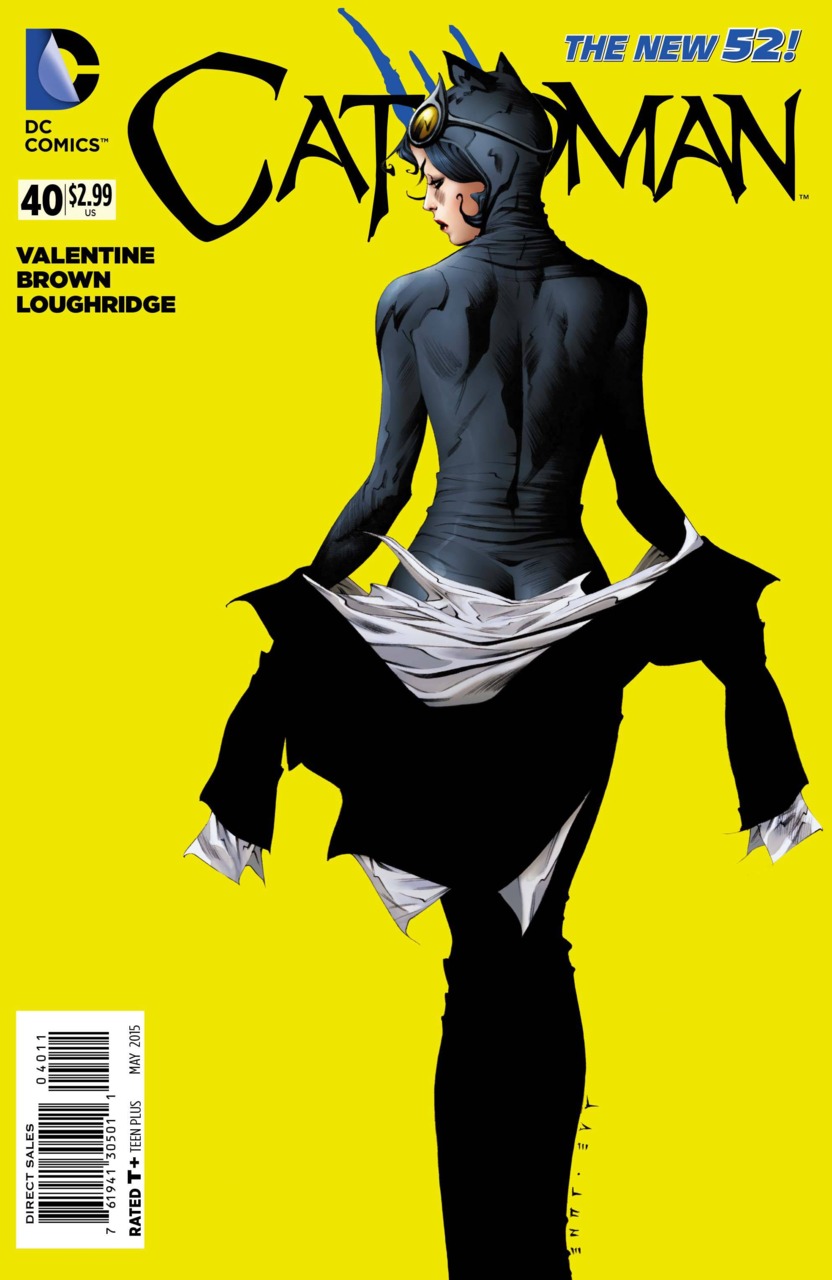 As the first story arc of the new creative team comes to a close, a gang war between Black Mask and Calabrese crime family has erupted across Gotham City. As Selina stands in the Egyptian Casino, she talks with Ward about the captured member of the Falcone family from the end of last issue. Ward remarks that another member has come for him, and Selina dismisses him as she requested that Mason come to collect the captive.

Back at her townhouse, Selina talks to Antonia who lets her know that the Falcone captive is doing well. Selina then remarks that Mason will be along to collect him later that night, but she wants Antonia to be gone by then and also states that she needs her to be safe. Ward then arrives and the two discuss moving the Falcone captive to the Egyptian and reorganizing the various Families to defend their borders in order to limit bloodshed.

Sometime later, Selina arrives at Forster Lane (a disputed territory) and discovers the new Catwoman meeting with the mole Lewis. As Selina approaches them, she informs Lewis that she will go with him to his boss rather than Eiko. Selina is then brought before the Penguin who thanks her for using her influence over Killer Croc to spring him from Blackgate during the riot (events seen in recent issues of “Batman Eternal). As the two villains verbally spar back and forth, Penguin reveals that he has chosen to side with Selina in the coming war against Sionis. They eventually strike a deal for Penguin’s soldiers to begin following the orders of the Calabrese Family. Selina then departs and meets with Eiko on a rooftop…she admits that she didn’t know Lewis was working with Penguin and Selina asks her to stand down from being Catwoman. If she is to unite against Black Mask, she needs to be whole once again. She then asks Eiko to stay out of the fighting so as not to get used as bait or get killed. She tells her to return to her father and be her “enemy” in order to survive.

As gunfire continues to rage between the two factions, Black Mask is seen meeting with Eiko’s father, Eiko herself and Mason. Sionis admits to knowing that Selina is attempting to draw them out and that it is their move to play. Mason then lets them know that he will take care of Selina and leaves. Mr. Hasigawa informs Sionis that he and Eiko will start to care of the various disturbances, and as Eiko goes to leave Black Mask threatens her as he believes her loyalty is wavering.

As Selina stands on a rooftop, she watches as the war continues to unfold and overhears a conversation between Detective Alvarez and his partner. While learning that the Falcones have attacked the Egyptian to regain their man, she also learns that Antonia is on her way back to Gotham to inform the GCPD of the recent events.

Selina departs and arrives back at her townhouse to quickly engage in a fight between Antonia and Mason who has her at gunpoint. As they battle, both Mason and Antonia end up shot with Selina finally coming up the victor. As she raises a gun on him, Mason points out that Antonia is severely injured. Selina decides to let him leave and threatens that if he ever comes back to Gotham he is dead. As Ward arrives, Selina reveals that she needed Antonia alive in order to take over the Family from her. Ward then asks if Selina will be okay alone as he gets Antonia help, she states that she has someone waiting for her as we see a quick flash of Selina opening a locker and revealing the Catwoman costume inside.

The issue closes with Selina standing across a rooftop looking at Roman Sionis. As she jumps down she acknowledges Batman who is also watching her. As she dons her mask once again, Catwoman leaps into the night as she unfurls her whip.

I have to say that although this story arc was incredibly detailed and brought Selina into a new light, I am extremely glad to see her become Catwoman once again. Although it feels like this story was simply created to build up to what is coming next, what we received was an incredibly complex story that revolved around the Gotham crime families.

As with every issue, the writing is extremely well thought out and showcases the depth in which Selina has descended from Feline Femme Fatale to Godfather crime boss of the Calabrese Family. The art also greatly matches the grittiness of this story, no flashing colors of splash pages…but that is something that truly isn’t needed in this style of story. Even the series of covers drawn by Jae Lee showed Selina as she transformed into this new crime lord and battled against Black Mask, Batman and the new Catwoman…leading ultimately to the final one where Catwoman is stripping away her “crime boss” attire and donning her true costume. Overall very beautiful work done on these.

This is an excellent series and I am looking forward to what is coming down the pipe with Catwoman and the other crime families. Although the war was temporarily waylaid thanks to the interference of Penguin, what will the pudgy villain hang over Selina’s head? And what will happen in the final confrontation between Catwoman and Black Mask…will history repeat itself and make Catwoman a killer again??? Can’t wait to find out.