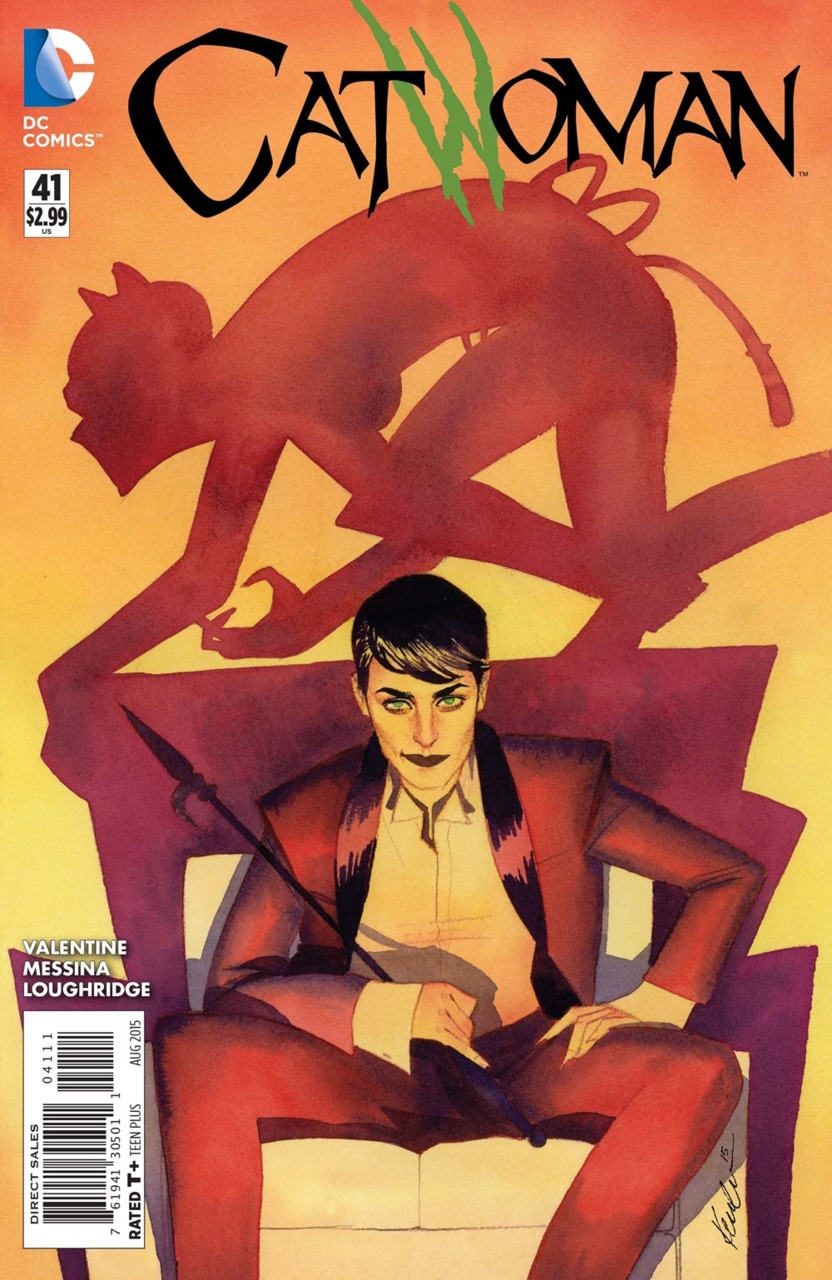 Just to catch you up after the long Convergence event…Selina has inherited the Calebrese crime family. Gotham recently went through a gang war which crippled Sionis/Black Mask’s gang. We have the undercover cops, Keyes and Alvarez keeping peace on the streets. Eiko Hasigawa, heir to the Hasigawa crime family, has been subbing for Selina as Catwoman off and on though her family is working for Black Mask. Roman Sionis believes he is in league with Penguin though old Oswald is cagey about the alliance. Sionis wants to destroy the Calabrese family and has already killed Nick Calebrese. Whew, ok back to the present.

This issue opens with Falcone dropping off some drop money at the Last Chance bar. After the money has been hidden Catwoman sneakily replaces it with the same amount of money, but with bills that have sequential numbers. Unable to spend the money Falcone will blame the cops and Sionis for the trickery which will cause them to come to the Calebrese family for protection.

After coming home from the opera, Selena hears from Ward that Batman is dead. She puts on a strong front but is upset. She retreats to her room where Eiko comforts her.

Sionis and Penguin are discussing their business relationship. Sionis is happy to restart a gang war but Penguin argues against it saying that war is bad for business. Sionis believes that since Falcone tried to kill Selena that he, Falcone, won’t be able to form an alliance with the Calebreses.

However, Falcone does go to the Calebreses as Selina predicted. Selina feigns anger at Falcone and leaves Antonia to discuss terms. Antonia decides that they won’t do business unless Falcone brings them the body of the gunman that tried to kill Selina.

Selina goes out for a little therapeutic Catwomaning and when she returns Ward sees her in costume. He is angry that she is Catwoman and is suspicious about the way the Falcone’s money had sequential bills. With Ward lining up as a potential problem within the family Selina decides she has to continue with her plans anyway.

Also, she needs to find out what happened to Batman.

This issue has a complicated but interesting plot. I have to be honest and say that it took me a couple of reads and some back reading to remember the nuances of the story after the long Convergence event. However, I found that my work paid off. The tale though complex is very satisfying. Selina’s trickery is clever and the characters motivations make much more sense than they usually do in comic like this. Also, I am very happy that Selina is going to find out about Batman’s whereabouts.

The panels where she hears about Batman’s death were very well drawn. Though Selina was masking her pain those of us who know of her feelings for Batman could see that it was all a front. Over all though I do have a little issue with the art in the books. It is beautiful and the colors are perfect. However, a few of the characters seem a little like they are out of central casting (coincidentally the way Falcone was described by the bartender in the beginning of the issue), Ward for example. Also, it took me some time to figure out how Catwoman was stealing Falcone’s money from the bar. A hook comes down from the ceiling and pulls up something, I suppose it must be the bag of cash but it is hard to make out. It is things like this that contributed to the difficulty of the read.

Though I’m going to ding the rating for these issues I don’t want to take too much away from this story line. I think this is a series to watch and I look forward to the next installment, especially with Catwoman on the hunt for Batman.