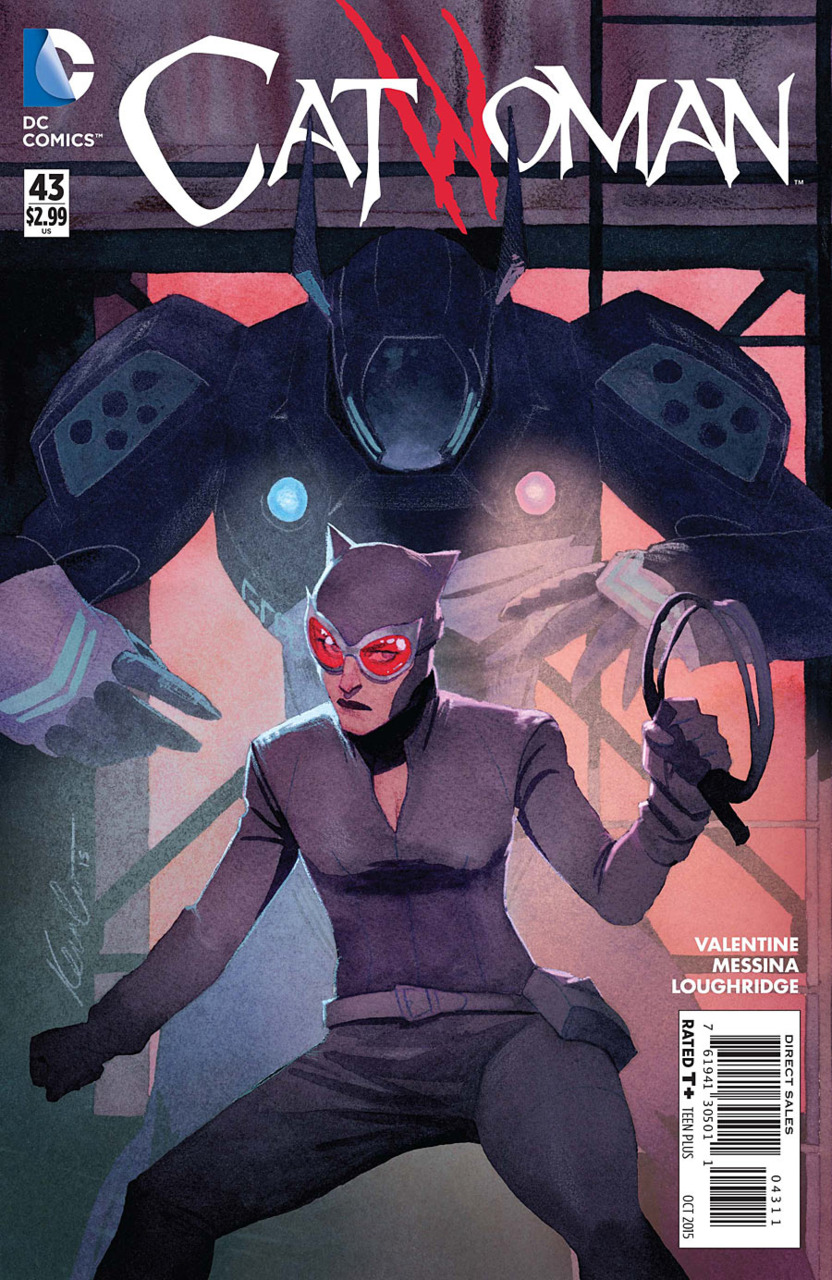 Selina struggles with balancing her responsibilities as the head of her family with her desire to find Batman and comes up against the entrenched interests of Gotham in Catwoman #43.

Spoilery bowl of milk below…

Selina makes her way through a party evaluating which of the guests is a colleague, problem, civilian or ally. Even her allies are trouble. She talks to Ward who tells her that she needs to earn the trust of the family especially since Selina has insisted on keeping her Catwoman identity secret. Selina rebuffs him and leaves for the night.

Meanwhile Sionis and Hasigawa are in the back of a car discussing the small gangs that were allies but have recently joined the Calebreses. They make their way to the Hasigawa training center where they find Eiko. Sionis tells her to go to the docks and set the traitorous families straight. They wonder if Penguin has betrayed them. Eiko gets back to training with Spoiler (sporting a spiffy Black Canary tee shirt). They discuss the news she just heard and wonder if Penguin is going to meet a bad end in Forster Lane. The two head out, with Eiko in Catwoman garb, to see for themselves.

At Forster they see a bunch of beaten bodies and Eiko realizes that Selina may be in trouble. Eiko feels guilty about that and lets Spoiler deal with the survivor while she goes to warn Selina. On her way she meets Sionis on the roof of a building where they fight. However, Sionis shoots Eiko who falls to the street below.

Ward and Antonia head to the Forster Lane Social Club where they chat with Penguin. They are trying to get Oswald to join their gang and betray Sionis. After some discussion Penguin agrees and as a gesture offers to tell Antonia Selina’s secret if they kill Selina.

Selina watches Detective Keyes leave the Lincoln National Bank from the roof of a building. Selina had given Detective Alvarez the key to the dead Private Investigator’s safe deposit box and now wonders what they are up to. Suddenly the Robo-bat appears and tries to arrest Selina who leaps from the building and escapes.

Changed into her civilian clothes, Selina walks past the Fox Center for Gotham Youth where she meets the newly poor and hirsute Bruce Wayne. Bruce is, as readers of many of the current Bat-books know, volunteering at the center. Bruce is really settling into his work at the center and recognizes Selina from around the neighborhood. They talk and finally Selina leaves for the evening.

Selina suits up into her Catwoman getup and grapples her way to her building’s roof where Antonia is waiting for her. Antonia now knows about her Catwoman gig and says it is ok. She asks if Catwoman could have saved Nick and Selina tells her that she had left her alter ego behind and wasn’t sure. As Selina goes in for the night, Antonia pulls the grappling hook off the side of the building.

Meanwhile Eiko is laying in the street in a pool of blood. A hand reaches out of the sewer and drags her in. It is Killer Croc.

This issue doesn’t have many of the problems the most recent issues did. There is much less confusion between characters and the art is in general much clearer and easy to understand.

Also, the story seems to be heating up and you can really feel the tight spot Selina is getting herself into. The world here feels wide and well thought out finally so I am hopeful that this book is on the right track.