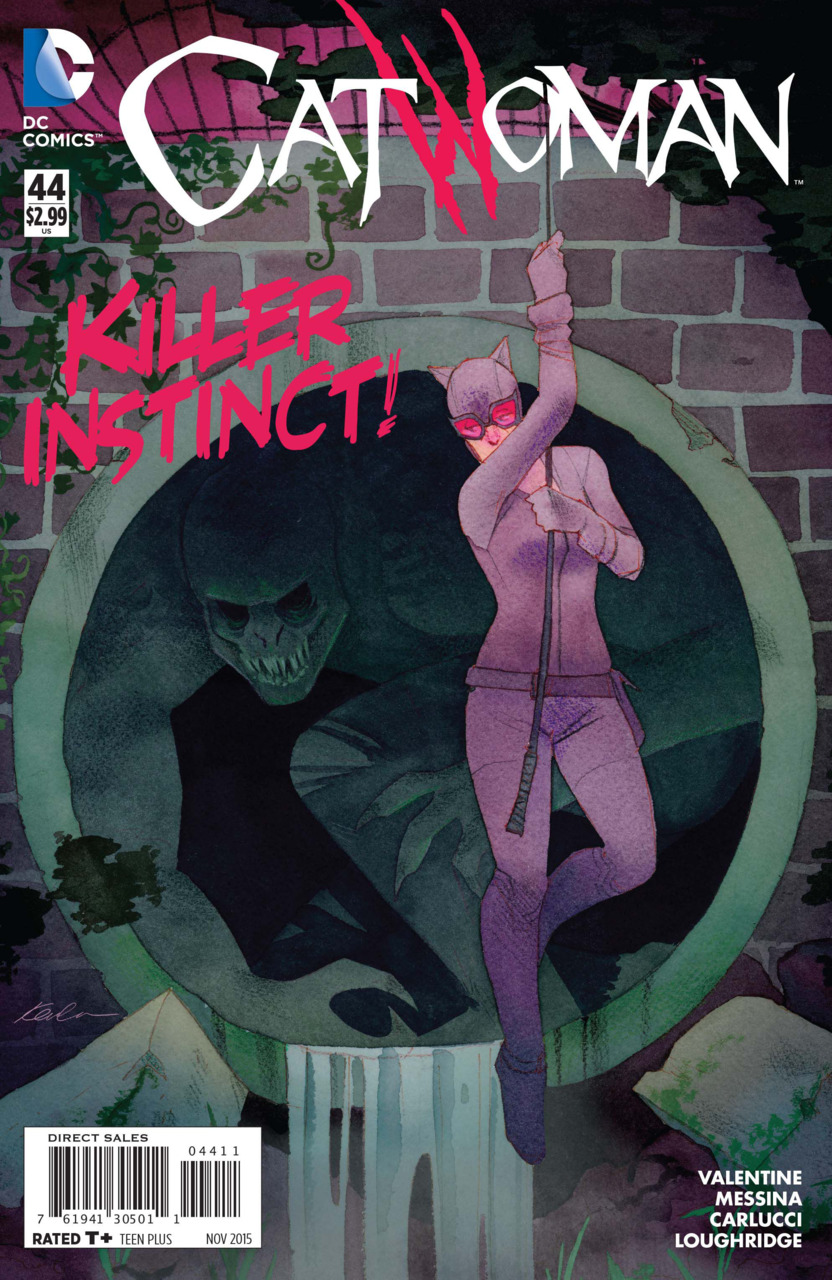 The inter-mob rivalries continue as Selina struggles between her role as the head of the Calabrese family and her identity as Catwoman in Catwoman #44.

When we last saw Eiko she was being pulled into a gutter by Killer Croc after being tossed off a roof by Sionis. Now, Croc has contacted Selina to help the injured Eiko who eventually wakes up. Eiko explains what happened to her and that Sionis believes that he has fought the real Catwoman. Selina begs Eiko to stop taking over being Catwoman but Eiko refuses.

Croc takes Eiko back home where they are observed by Sionis who now believes that the Hasigawas are involved with Catwoman. Selina realizes that it is too dangerous to let anyone else be Catwoman and meets with Croc where they discuss her conflict. Selina says that she has lost enough being the head of the Calabrese’s and refuses to lose any more. She tells Croc that she has to get out.

Back at the gym, Eiko is helping train Spoiler and the two argue over Eiko’s getting injured because of her involvement with Catwoman. Spoiler leaves in a huff but is confronted by Selina who wants her to get information about Bill Turner’s murder. Bill Turner had been hired to unmask Batman before he was killed. Spoiler won’t commit to helping but Selina hopes she does and leaves.

Antonia and Ward meet Selina for dinner at a restaurant. Antonia is afraid how Selina will react when she finds out that she was negotiating with Penguin and so found out that Selina is Catwoman. After discussing this Antonia tells her that should couldn’t bring herself to betray Selina as Penguin requested. Selina tells Antonia that she wants to go back to being Catwoman and Antonia should lead the family. Once they can work through their current difficulties they will make the arrangements.

Back as Hasigawa headquarters, Sionis and his gang break in and start shooting. Sionis fights his way to Hasigawa and accuses him of protecting Catwoman. Hasigawa realizes what has been happening and is shot by Sionis. The injured Eiko arrives to the devastation and her dead Father with a note “Play with the cat and get scratched”.

Genevieve Valentine’s Catwoman continues to improve. This installment continues the interesting mob and personal developments that started in the last issue. There were a few months where I felt this book to be too confusing and scattered. However, all that groundwork is now paying off. The struggle between the crime families mirror Selina’s struggle between being the head of the Calabrese’s and her identity as Catwoman. Her maneuvering between all of her enemies and trying to find and organize allies is fascinating to watch. Being her friend is a perilous proposition as Eiko is finding out.

The relationship between Selina, Antonia and Ward is very satisfying. The three are torn between family and personal advancement but at the end of the day their alliance wins out.

This issue also has a terrific apperance by Killer Croc. After being a threatening presence at the end of the last issue he is in fine form here. Although he is often at odds with Selina he doesn’t consider her an enemy and gives her the tough love that she really needs now.

The art by Messina, Carlucci and Loughridge is surreal and unexpectedly realistic in a Ralph Bashki kind of way. Not exactly my favorite style as it is a little scratchy for my taste. But many of the backgrounds and the shadowing give the story an eerie quality that serve the menacing storyline very well.