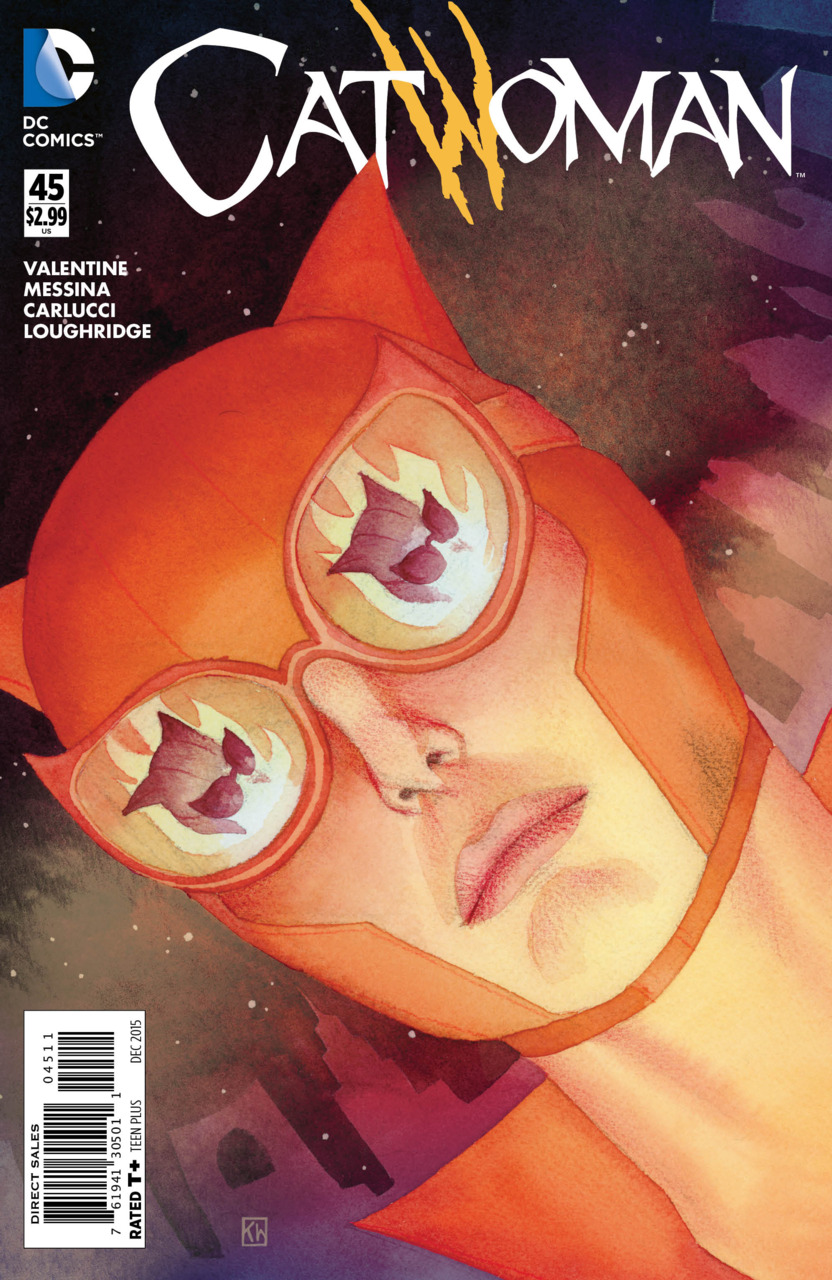 Selina tries to escape her responsibilities as the head of the Calabrese crime family but every time she tries to get out, they bring her back in in Catwoman #45.

At Mr. Hasigawa’s grave site the collected loved ones and criminals pay their last respects. Sionis notices that Eiko looks bruised and hints that he believes her to be Catwoman.

Later that night Selina makes her way home to the roof of her building. Eiko surprises her with a gun to her head in her bedroom. Eiko says that she is going to destroy Sionis for killing her Father and Selina tries to dissuade her to no avail.

Selina takes to the rooftops. She is afraid if Eiko tries to kill Sionis that the gangs will try to kill her. She decides to kill him herself.

Antonia meets with Penguin and lets him know that she knows that Selina is Catwoman and that she refuses to kill her to prove her loyalty to him.

Selina enters Forster Lane near the Youth Center that Bruce Wayne volunteers at. There is a minion of Sionis getting orders to shake up the local kids to get the area under control. Bruce overhears the conversation but sees Selina handle him. She has a brief conversation with Bruce as she heads down Forster Lane to Penguin’s secret door.

In Penguin’s lair, Sionis is saying he needs to control Forster Lane and needs his help. Penguin shows Sionis his secret tunnel. Sionis enters and is confronted by Selina. Penguin shuts the door behind them. Sionis is tough but no match for Selina who knifes him in the back.

Back at Eiko’s penthouse she is told that Sionis has disappeared. Killer Croc lets her know that he was taken care of by Catwoman. Eiko is put out that Selina has taken her revenge away, but is also grateful.

Meanwhile in Penguin’s tunnels we see that Sionis isn’t nearly as dead as we thought. He is terribly wounded but Penguin says that he can help if Sionis doesn’t take revenge on the Calabrese’s and disappears from Gotham.

In the Hasigawa Training Warehouse Eiko takes control of the Hasigawa gang and lays a beatdown on one of the team that objects. She heads to her office where she speaks with Stephanie Brown in her Spoiler gear. Eiko has decided to take revenge on the gangs and kill those who resist her.

This issue, the penultimate installment of the Genevieve Valentine Catwoman run, continues the interesting story of the gangland struggle. It took several issues for this story to gel but here it is in full swing. I like the sleazy tactics of Penguin as he plays everyone off each other looking for his best advantage. Also, even though Eiko and Selina are somewhat at odds I like how protective Selina feels towards her, risking herself to protect Eiko. The story does seem to be coming to an end, we are only left to see if Selina can successfully turn over the family to Antonia, who is nearly absent from this issue.

The art by Messina, Carlucci and Loughridge continues in the style of the past issues. It creates an effective moody feeling that serves the story well. Gotham is a dark almost haunted place.

The cover by Kevin Wada is a soft, almost watercolor looking piece of work. The Monsters of the Month Variant by Robbi Rodrigueza is an odd looking portrait of an ethnic Frankenstiened Catwoman surrounded by felines and tickling the belly of a bat. Both suit the mood of the internal art, though the variant is a little comical for the tone of the story.

I rated the last few issues of Catwoman pretty highly and will continue this month. The story is solid if not my cup of tea. I know that many people really love Valentine’s Catwoman run and I enjoy the book but because I’m not so much of a gangland story fan I can’t really get too excited. However, it is solid Selina so I get why people enjoy it so much.