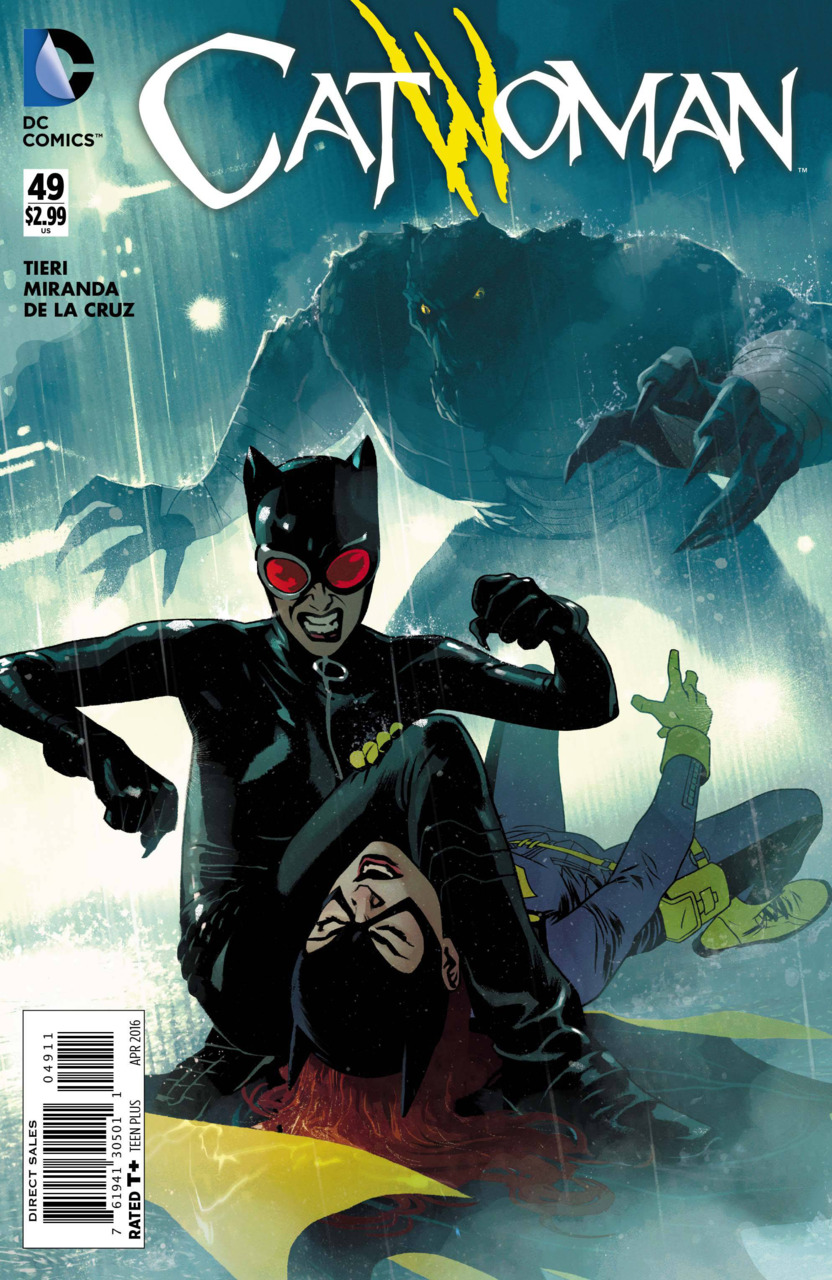 Selina is on the run from the Gotham City Police as well as assassins aiming to collect Penguin’s million dollar bounty on her head as she tries to solve the mystery of the Frost Diamond in Catwoman #49.

A million dollar contract has been placed on Catwoman’s head by Penguin because she has stolen the Frost Diamond. Killer Croc is aiming to collect the bounty. Selina reminds Croc that she is probably his only friend in the world but he is intent on obtaining the reward. Selina is being overpowered by the reptilian backstabber when Batgirl arrives to distract him. Selina takes advantage of the opening to slash Croc in the eyes which takes him out of the picture for a while.

Batgirl tries to apprehend Catwoman because she is wanted on a murder charge. The pair fight until Croc regains his senses and body slams the both of them. Selina is at his mercy when the Gotham City PD arrives which sets Selina and Croc running. As she is escaping down an alley she runs into Riddler who also wants to collect the ransom. Selina makes short work of Mr. Nygma and is contacted by a mysterious text on her wristband telling her to make her way down a manhole.

She gets away from the police and into a cab. She is again texted by the man who calls himself Mr. Blonde. Apparently Mr. Blonde is the one who hired her to steal the Frost Diamond. Selina ditches her wristband so she can’t be tracked and heads back to her hideout where she meets up with Tesla.

After doing some thinking Selina figures that the diamond isn’t really a diamond. She smashes it and finds a USB drive inside. The USB drive contains Penguin’s blackmail files which is why he set all the bad guys in Gotham after her.

Selina decides to contact Bruce Wayne and meets him at a restaurant. During dinner she senses that several people are police in disguise. She tries to fight her way out but is tazered by the Robo-Bat and apprehended. Bruce, who is still having memory problems, is confused trying to understand why he would know someone like Selina. Until next time…

The plotting of this issue by Frank Tieri is fairly straightforward. It is good to see Selina back in the catsuit after spending so much time trying to be a gangster. Her run in with Croc, Batgirl and poor Riddler make this an action packed story. Also, the discovery of the USB inside the diamond is an interesting twist, thought it is strange that they weren’t able to see the USB inside the clear object.

Inaki Miranda’s art is dynamic when the story needs it, and sedate when required. The page of Catwoman and Batgirl fighting in the rain is an exciting montage of action.

Extremely high marks have to go to Eva De La Cruz’s colors. The palette is constantly changing so no one color scheme overwhelms the issue. However, the pages of Selina and Bruce at the restaurant are powerfully vivid full of teals and violets. It is like how Miami Vice looks in a fever dream.

While I’m normally not a Catwoman fan I am really enjoying Tieri’s run so far. It is somehow brighter and more enjoyable that the previous arc, which I know many people really liked, but was a little dour for me. I prefer a wittier and engaging Selina rather than the tense and weighed down version of the character. Don’t get me wrong, the stakes are high at the end of every issue here, but it is fun seeing Selina banter with Tesla and make short work of Riddler. I am going to give this issue high marks even just for the color work on the last three pages. I said it above and I’ll say it again, the colors are lovely and while I typically read Catwoman digitally I am planning to purchase the paper copy just to see if it is as beautiful.