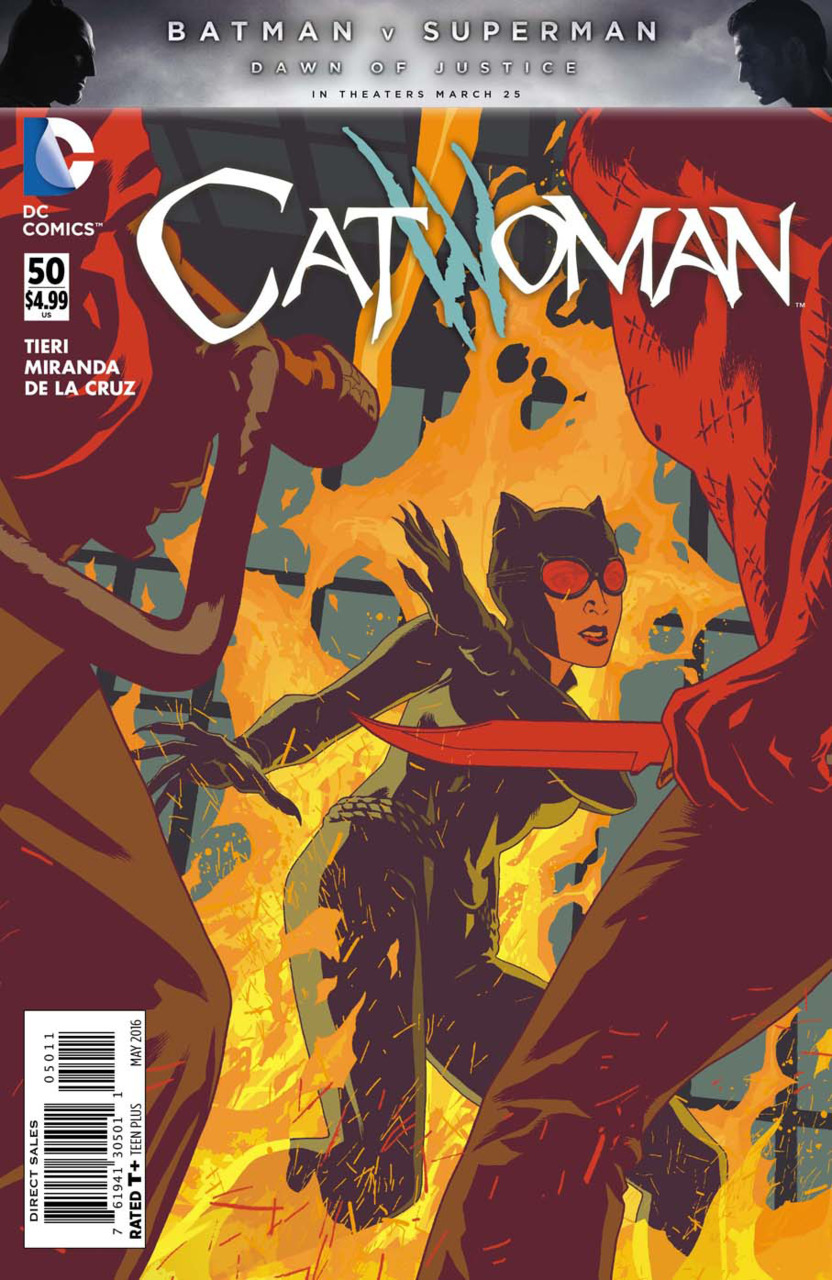 Selina encounters serious trouble in prison as the mystery of the Frost Diamond becomes more dangerous. Can she survive the trouble bearing down on her? Find out in Catwoman #50.

Selina is in prison and some of her fellow lady jailbirds are trying to collect Penguin’s million dollar reward. Selina points out that they won’t get their payday if she is killed, only if they find out the location of the Frost Diamond. It turns out to be a moot point as none of the other inmates seem able to lay a hand on our athletic hero. Selina is sent to solitary which is meant as a punishment but she realizes that being away from the general population and guards is probably safer for her.

The now one-eyed crooked cop Scagnetti meets with some faux-guards. It turns out that they have replaced some dear departed prison screws with Victor Zsasz, Firefly and Clayface. Zsasz is looking forward to getting his cruel mitts on Selina.

Back in Gotham, Tesla is fretting over Selina’s prison jaunt and wondering if she is being targeted as well. She takes her suspicions out on a good Samaritan whose intentions she misunderstands.

In prison, Selina is attacked by Zsasz. A real guard tries to intervene but is killed by Clayface. Firefly sets the joint on fire with a flamethrower. Selina beats Victor up pretty handily but is grabbed and held by Clayface. Scagnetti is about to trade an eye for an eye, literally, when he is stopped and held by some curiously aggressive vines.

A baseball bat takes out Zsasz and Scagnetti. Yes, it is Poison Ivy and Harley Quinn come to save the day! It seems that the client that Selina stole the Frost Diamond for, Mr. Blonde, has arranged to spring her from the clink with the help of Selina’s fellow sirens.

Back home, Selina and Tesla pour over the blackmail files that were hidden in the Frost Diamond. It turns out to be some pretty grim stuff. They see there is one person that Penguin is blackmailing that is likely Mr. Blonde. Selina arranges to meet him at a restaurant – it is Lex Luthor. Lex insists on getting the drive with the inconvenient evidence on it. He has some men threatening Tesla so he can be sure that Selina cooperates. She does.

Cue Lex Luthor’s revenge: Scagnetti is sent to prison for the murder of Louie and Penguin has a run in with the business end of Killer Croc.

It also turns out that Tesla has installed an invisible virus on the drive that knocks out the Lexcorp computer systems, which she takes advantage of by pulling out the fee for the diamond heist. Selina sends half the money to Louie’s family and uses the rest to take herself and Tesla to Hawaii for some well earned R&R. THE END

The second story in this issue revolves involves the history of a mysterious skull-like ‘Faceless Mask’ that is at the Gotham Museum of Crime. The mask originated with the Native American tribes that inhabited the land that would become Gotham. After many calamities it turned up in Colonial Gotham where one Miles Elliot found the relic where it figured into his mistress’ burning at the stake for witchcraft. The mask had subsequently been worshiped and destroyed by various factions in Gotham’s history. Selina Kyle sees the mask in the museum and doesn’t care about its history, but only how Catwoman can steal it! THE END

The third and final story in this issue begins with Catwoman dodging various ensnarements as she tries to break into a space station. She evades laser beams, water baths and airless space tubes as she makes her way into the Justice League’s headquarters. She tells the assembled League members that their security needs work. Damian is put out that she was able to infiltrate the Watchtower. As Catwoman leaves the do-gooders Damian notices that his grappling gun is missing. Oh, Selina. THE END

The oversized Catwoman #50, written by Frank Tieri, is a strange assortment of tales. The first is a satisfactory conclusion to the mystery of the Frost Diamond. The trouble Selina gets into in prison does seem menacing and her eventual release by Harley and Ivy is a fun twist. Interestingly, the popular Harley Quinn shows up in a book and isn’t on the cover., which typically boosts sales. Props to the team for enough restraint to protect the plot twist. It shouldn’t be a surprise that Mr. Blonde is Lex Luthor, or that Selina and Tesla engineer a double cross on him. However, it is strange that the end of the story is told via Selina’s narration. It gets the tale told quickly and with some humor, but narration often seems like a crutch. Since this is really a postscript to the story it isn’t too offensive, but it seems like a missed opportunity for something more.

The really strange thing is that this issue has two more stories that don’t really amount to much. The first mini-story about the weird mask is interesting enough, but is really just the history of a strange object that Catwoman wants to steal. It is hard to tell what the point is. Also the second mini-story about Selina breaking into the space station is fun and pretty to look at, with colors by Blond, but again, it doesn’t seem to have a point.

The art is uniformly good in all the stories. Inaki Miranda and Geraldo Borges do the pencils and inks on the main story with Eva De La Cruz and Blond on colors. Their work is simple and effectively tell the story. There are some very pretty pages where Tesla is walking home in the rain. The Mask story has pencils by Dan Panosian and Alex Konat with inks by Dan Panosian and Jay Leisten with colors by Blond. The style here is darker and scratchier in many places although some of the colonial Gotham panels are particularly well done. The last story with pencils and inks by Steve Pugh with colors by Blonde is particularly good looking. The colors here are a nice mix of greens and reds. Very nice.

I have mixed feelings about this issue. While the conclusion of the Frost Diamond story is fairly satisfying the weird narration at the end put me off a bit. I am not sure of the purpose of the other two stories, neither really packed a punch and seemed pointless. They were interesting in a way but seemed like filler, just the seed of other stories that could have been fleshed out into something more.