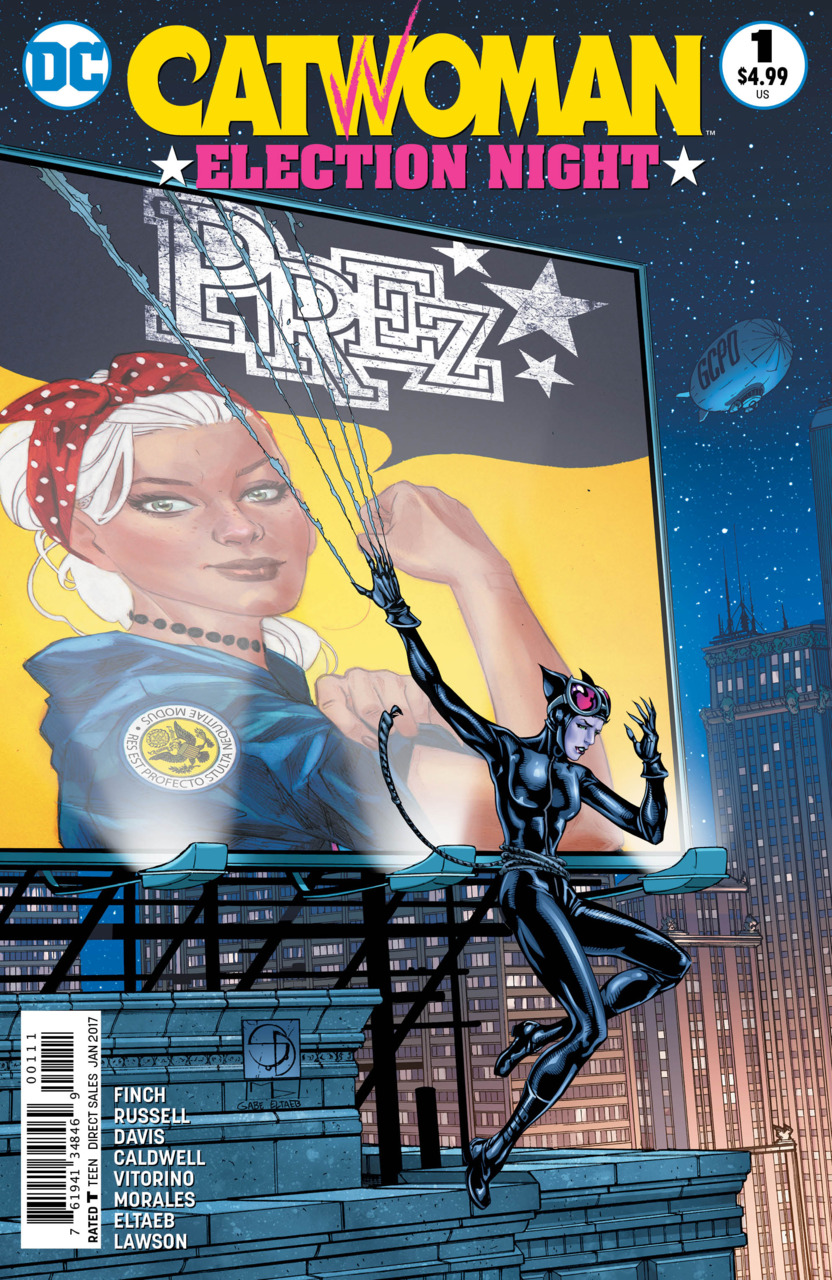 Selina Kyle navigates the twisty workings of Gotham’s Mayoral campaign as she tries to save Miss Kitty’s Home for Wayward Girls in Catwoman Election Night #1.

Several years ago Miss Kitty stood outside her orphanage, Miss Kitty’s Home for Wayward Girls, in the rainy streets of Gotham calling for her cat Ali. In the laundry room Selina Kyle as a young girl finds the cat who she calls her best friend. Two other girls, Kelly and Jamie, overhear her with the cat and decide to harass Selina. They gang up on her and attach her with a box cutter. The cat attacks Jamie and Selina readies a punch for her.

In the present, Selina is fighting a ruffian working for Penguin that has harassed Miss Kitty. Selina heads home and discovers that Penguin is running for Mayor of Gotham on a platform of building a wall around Gotham. He wants to demolish Miss Kitty’s Home for Wayward Girls to construct the wall. His opponent, Constance Hill, is against tearing down the Home.

Back in the past, Miss Kitty wonders why Kelly, one of her charges, has run away just before she was about to be adopted. Instead Jamie has been taken by the family.

At Constance Hill’s campaign headquarters the Mayoral candidate is worried that Penguin leads her in the polls by 10 points because of her reluctance to tear down Miss Kitty’s orphanage. Catwoman pays her a visit and asks why she wants to protect Kitty’s house. Constance replies that she builds bridges not walls.

Selina sneaks into Penguin’s Iceberg Lounge and runs into Batman. Batman knows that Selina is looking into the reason Penguin wants to demolish Miss Kitty’s home and gives her a file full of Penguin’s recent real estate deals.

Selina, in Catwoman garb, visits Miss Kitty who calls her by name. They share a cup of tea and talk about the past. Miss Kitty ruminates about why the girl Kelly ran away just when she was going to be adopted. Selina thinks back to long ago when she saw the bad girl Jamie coming out of the laundry room of the building covered in blood. Jamie had mentioned that there is a family coming the next day looking to take home a child and that she is going to ensure it is her that is adopted. Selina remembers cleaning up the blood by the washing machine.

In the present day Selina goes down to the laundry room. Miss Kitty says that the girl Jamie, has changed her name to Constance Hill, the Mayoral candidate, and paid for a new laundry room floor.

Selina heads over to the Mayoral debate and confronts Constance with her past at the Orphanage. She asks if she killed the child Kelly so she would be the one adopted. Selina says that they are going to dig up the floor in Miss Kitty’s Laundry room and the cops will surely find hair and skin samples that match Constance. In a fit of rage Constance admits the crime.

It also turns out that Penguin had taken advantage of his rhetoric about building the wall and purchased much of the depressed real estate where the wall was to be built.

Back at the orphanage Miss Kitty is sitting watching the debate and complains about politics. The girl sitting next to her, Beth, says that someday she will grow up to be Prez-ident.

The second story, Prez, follows the teenaged president Beth Ross. There is a birth control pill that is in the form of a candy. Conservative members of the government want it banned because birth control promotes promiscuity. Beth wants it to be legal because it reduces unwanted pregnancies. There are also many people that want to have any manner of firearms, including hat guns, banned, no matter how dangerous. The legislature bans the sale of the birth control candy. Beth decides to put a moratorium on the sale of ammunition, saying that while gun ownership is permitted by the Second Amendment, ammunition is not. The gun lobby takes the case to the Supreme Court which finds that ammunition is also covered by the Second Amendment and cannot be regulated. However, Beth works with the birth control candy company to put their candy in the shape of bullets so it can no longer be prohibited.

The Catwoman story by Meredith Finch has obvious parallels to our own 2016 election. One candidate with ‘hill’ in her name and the other wants to build walls and make Gotham great again. The story here though is more criminal than political. Even with the campaign backdrop this is an old fashioned mystery story with Selina solving a mystery from her past. The plot unfolds predictably without any surprises.

Shane Davis does the pencils and Igor Vitorino and Michelle Delecki also contribute along with Gabe Eltaeb on colors. The combined effect is mostly solid. Selina looks great and the faces and expressions are effective. Some of the drawings of the little girls are a bit murky and hard to make out but otherwise it all works.

The Prez story by Mark Russel with Ben Caldwell on pencils, Mark Morales on inks and Jeremy Lawson on colors, is a bit more inconsistent. The gags such as the hat gun are funny but over done and the resolution of making the birth control pills in the shape of bullets is a little over-clever. Everyone is a caricature and it doesn’t come to the heights that the comic Prez hit in its recent run.

Overall, I enjoyed both stories in this comic, but I don’t think that it was particularly exceptional. It is always good to see a solid Selina and I do miss seeing Beth Ross. For those reasons I will be lenient in my scoring, but thrifty buyers might do well to shy away from the $4.99 cover price.