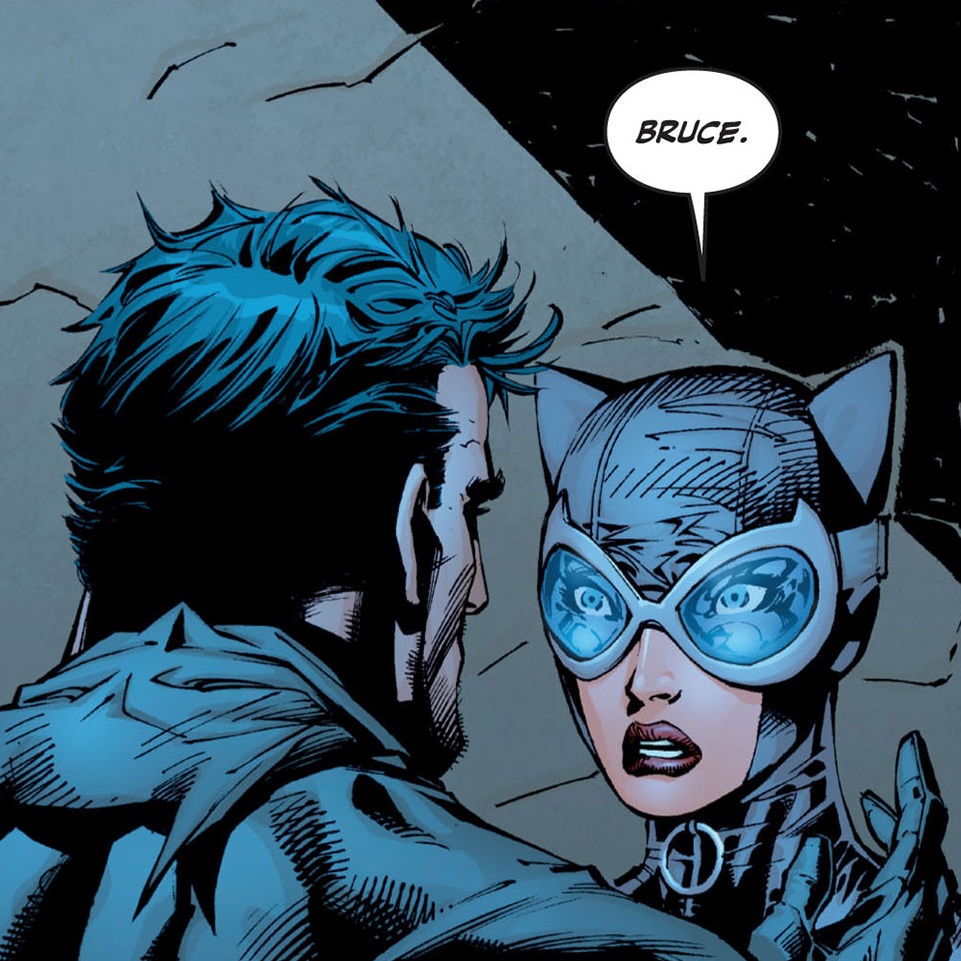 The marriage proposal between Batman and Catwoman in Batman #24 has brought many old fans back to the series. If they’ve been away for a while, one reoccurring question has been “When did Catwoman learn Batman’s identity?”

The history of her knowledge on his identity is very complicated and DC has flip flopped on it so many times. For the purpose of this article we’ll only be looking at mainstream continuity. No Earth-2 or movie stuff.

We begin in 1983 with Batman Volume 1 #355. Bruce Wayne and Selina Kyle previously had a long relationship strictly with their civilian identities. Selina Kyle was a known former criminal, but she had no knowledge of Bruce being Batman. Things ended, and Bruce eventually rekindled things with Vicki Vale. Catwoman returned to the book and wasn’t too pleased. She attacked Batman. This is the first time she displayed knowledge of Bruce’s identity. It was never explained how she learned it. It’s likely that writer Gerry Conway just goofed. Goof or no goof, her knowledge remained in her next few appearances. You may be asking yourself why Batman blindfolded Catwoman. Doesn’t she know his identity? This was a question many readers had and DC gave two different answers on it. The walls came tumbling down in the letters pages of Batman #397. So first, DC said “it’s a mistake she knows,” but then felt it was important enough to go back and say “Nevermind, she doesn’t and never will.”

During this period, Catwoman reformed, was pardoned and became a partner for Batman. They eventually broke up again, but after Crisis writer Mike Barr used a two part story in Detective Comics to reset the status quo and bring Selina back to her cat burglar roots. Take a look at Detective Comics #569 published in 1986. So once again, she knows. There isn’t any explanation either.  This doesn’t last long as the Joker puts her in a weird machine to brainwash her. Detective Comics #570 shows the aftermath. The name she gives Joker isn’t the correct one. Her knowledge of Batman’s identity is lost and she reverts back to her villainous ways.

The continuity of Batman and Catwoman’s relationship was so strange, that DC writers seemed to avoid it. For almost the next decade, they would only directly interact with each other in “Year One”-esque flashback stories. This meant that the writers could avoid having to address Batman remembering their history or even working out what that history was.

She appeared in Detective Comics #612 and Batman #460-461 without interacting directly with Batman. Then we curiously get this scene in Batman #499. In addition to not knowing that Bruce Wayne is Batman, Selina and Bruce have actually never met outside of costume before! The Barr story resetting her status quo was forgotten and forsaken in favor of a new history. In Pre-Crisis (and the beginning of Post-Crisis) Selina Kyle’s identity as Catwoman was publicly known and she had some jail time on her record.

By the early 90’s, Selina’s identity as Catwoman was secret and she had never been arrested. Even Batman didn’t know who she was. At least for a while. Batman eventually learned her secret identity but the narrative still treated it as if it was the first time.

During a storyline called “Hush”, Batman and Catwoman became a couple again or for the first time. Darn retcons. In Batman #615 (2003) he unmasks himself to her. Once again she knew his identity. The previous Mike Barr amnesia (yes it was Post-Crisis) was not mentioned and this was treated as a first time occurrence. They split up at the end of the “Hush” saga, but her knowledge of his identity was not reversed. She maintained it consistently throughout the remainder of Pre-Flashpoint continuity.

History then gets wonky again when the DC line relaunched for the New 52. Catwoman #1 showed the new status quo of their relationship.. Catwoman once again lost her knowledge of Batman’s identity.

We did get a strange story in Detective Comics volume 2 #27 where the Bat-family find themselves in a fantasy world called “Gothtopia.” In this world, Selina and Batman are a couple and she has knowledge of his secret identity. Everything goes back to normal and by Detective Comics #29, Selina has forgotten (for at least the third or fourth time) that Bruce Wayne is Batman. TBU staff member Gerry Green pointed me to Catwoman #49 as Selina goes to Bruce Wayne for help. While it’s not stated she knows he’s Batman, the context of the scene and the overall story heavily imply it. Our next continuity changer occurred in “Rebirth”. In Batman volume 3 #10, the narration for the story is told through a letter Selina Kyle is writing Bruce Wayne. The letter makes it very clear she knows he’s Batman. ….and that’s the status quo…at least until the next time she magically forgets.

“Hush” is actually the only time where she learns on-panel! So the next time someone asks you when Catwoman found out Batman’s secret….run!