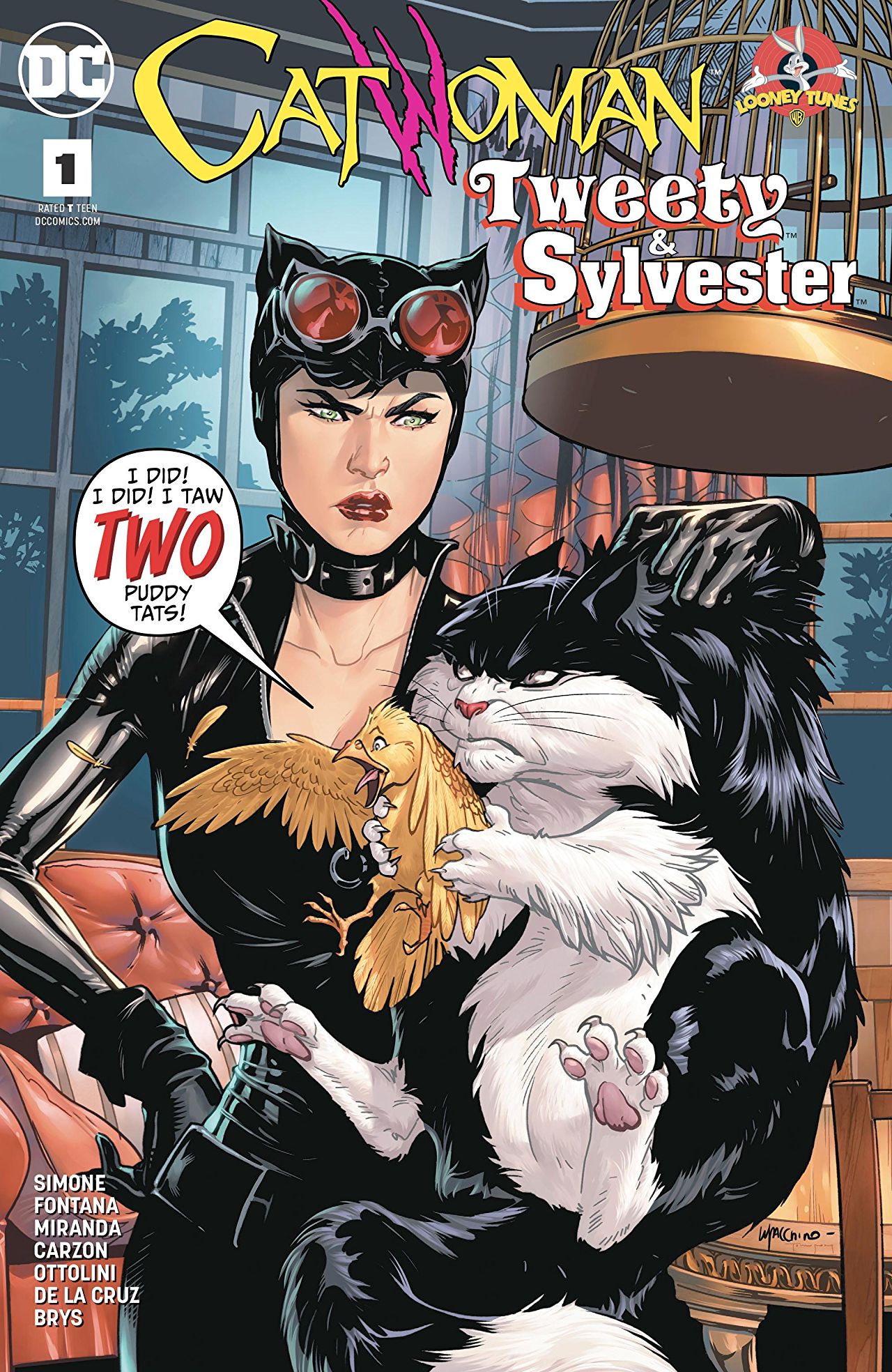 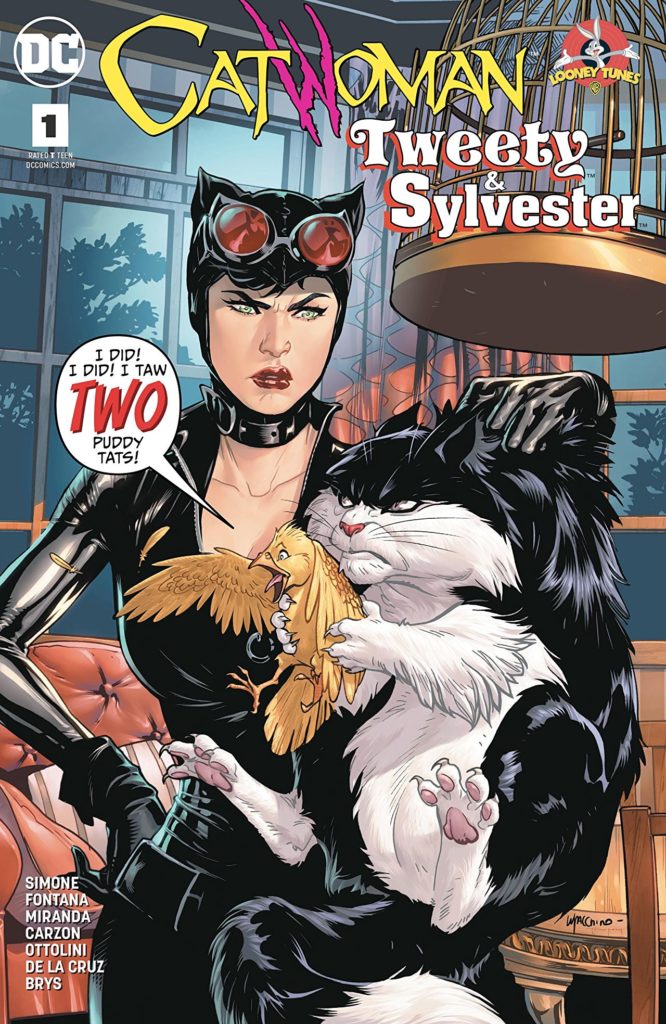 Overview: Catwoman and Black Canary find themselves caught in a death match between cats and birds, precipitated by the arrival of two very “looney” creatures…

Synopsis (spoilers ahead): In a creepy cemetery, at the “witching hour”, a conclave of witches gather. As Klarion the Witch Boy eavesdrops, three of the witches make a bet about which is better – birds or cats, with the stakes being reality itself.

In Gotham, Catwoman steals a priceless cat artifact, claiming she’s stealing from a thief. On the rooftops, she sees a strange portal in the sky, out of which falls a black and white cat. Dashing forward, she catches the cat, which surprises her by speaking to her.

In Gotham’s music district, Black Canary puts on a small concert, but her chosen set list of “sexy torch songs” while she swings onstage wearing wings and a leotard don’t connect with her alternative rock-loving fans. As she dispiritedly talks to her manager on the phone, she finds a talking canary in her dressing room.

In Selina’s apartment, the cat tells her (after a lot of outrageously silly flirtation and lisping) that the fate of the universe is at stake. In her dressing room, the bird tells Dinah the same thing. The two costumed adventurers don’t believe their talking beast acquaintances, so the witches give them a magical nudge to get the adventure started. Giving the cat matching goggles, Selina jumps from the roof to find the bird, while Dinah hops on her bike. The two converge on the same point and Selina whip-yanks Dinah from her bike. The two reluctantly gear up to battle, with Selina getting the first hit, but Dinah promptly thrashing her. The cat attempts to swallow the bird, but Dinah shakes him upside down to get him to spit it out. However, Selina recovers and knocks Dinah out with a trash can, and collects the bird (who reveals its name is Tweety Pie) and cat. The cat confirms that if it and Selina fail, every feline and honorary cat (like Selina herself) will die, while Dinah tells Batgirl (laid up in a wheelchair with a broken leg) that conversely, if she fails to defend Tweety, every bird and bird-themed person will die, and asks Babs to send all the backup she can get.

On the rooftops again, Canary confronts Catwoman as she’s about to feed Tweety to the cat, and discovers that Selina has also gotten back up, from Amanda Waller – Catman and Bronze Tiger, while Hawkman and Hawkgirl attack Catwoman. Canary’s sonic scream takes down her first opponents, while Cheetah disables the Hawkpeople harassing Catwoman. Despite Waller’s desire for specimens for “animal sapience”, Selina again prepares to feed Tweety to the cat, this time with salt and a napkin bib. The witches eagerly watch the results of their wager, but Dinah reaches Selina in time to disrupt the cat’s meal again. However, Catwoman’s third wave of backup, the cat-descended Tamaranian Starfire attacks with energy blasts. Fellow Titan Raven fights back on Dinah and Tweety’s behalf. Dinah faces her longtime teacher, friend, and father figure Ted Grant, the Wildcat, who tries to convince her that the whole setup is a con, but she knocks him out in her rush to save the birds.

As Selina and Dinah both enter the abandoned but creepily clown-themed ACME factory, the witches add more and more players to the battle – Lynx, Cheshire, Red Robin, Hawk and Dove, Strix the Court of Owls Talon, the Penguin, Lady Blackhawk, and many, many more. Just as the cat grabs the bird, and Dinah towers over the cat, Selina escorts Klarion and his cat familiar through the fray with the news that he knows the witches behind the conflict, and will lead the heroes and villains to them. Selina and Dinah shake hands, and the witches tremble.

As the witches attempt to convince Sylvester the cat to win the eternal war between cats and birds, he simply says “You’re dethpicable” as Tweety hits them over the head with their own brooms. Selina and Dinah each embrace their beast opposites, symbolizing the peace of the victory, and the army of bird and cat-themed adventurers feast on the witch’s party leftovers.

Canary writes two hit songs for the Asian market, “I Tot I Taw A Puddy Tat” and “Suffering Succotash”, sending Catwoman some sushi from her tour (along with Sylvester). The master thief, meanwhile, continues her semi-Robin Hood act with her own sidekick, Tweety (now wearing yet another matching set of goggles).

Backup story: As Sylvester and Catwoman both invade Tweety’s apartment complex, the little bird watches Black Canary on TV, but manages to scare them off. Catwoman strikes a deal with Sylvester to rob the safe together, instead of a quick smash-and-munch of a single bird. Though the two cats work well together, Tweety manages to thwart most of their schemes, and by teaming up with Black Canary, chases them off once again, getting back into its cage with signed photos of Canary and Conan.

Analysis: Ever since Tom King hit it big with Batman/Elmer Fudd (due in no small part because of Lee Weeks’ incredible artwork, which earned him the deserved issues in King’s regular Batman run that we’ve just seen), DC has been trying to see if lightning with strike twice. This time around, they’ve put together four mashups, and this issue stands out for me as the best of the quartet, despite a few missteps.

Gail Simone, after bursting on the scene with a truly magnificent run on Birds of Prey, and several intense runs on other titles including Wonder Woman and Secret Six, has somewhat faded in the landscape of mainstream comics. She’s worked steadily, but few of her titles have generated as much excitement as those early days when Babs, Dinah, and Helena took Gotham and then the world in a flurry of fists and feet. This book feels like a return to form – really clever in the way it melds the DC Universe within the structure of a Sylvester the Cat vs. Tweety Pie the Canary’s eternal slapstick battle. Though centering around Selina and Black Canary (it could have been a Canary book or a Catwoman/Canary/Sylvester/Tweety title if Catwoman didn’t have more name recognition “juice” these days), Simone also crafts a situation which allows her to pull nearly all of her favorite characters into the fray for at least one moment of glory. Framed as the madcap result of a witches wager, the cat-themed and bird-themed heroes smash into each other over and over again, ending up, of course, in an abandoned ACME warehouse. A particularly sweet and important appearance by Ted Grant, one of Dinah’s oldest and best mentor figures, offers a hint at Simone’s smart solution – to overturn the unfair wager that pitted the costumed adventurers against each other. Where in some of her recent works, such as Batgirl #34, Simone leaned a bit too far into exclusively female casts having a battle royale, here she uses characters like Grant, or even Tim Drake’s Red Robin (wearing his not-much-missed winged costume) as valuable and emotionally resonant members of the ensemble, without upstaging the two leading ladies one bit. She also uses Klarion the witch boy in a role reminiscent of the much beloved Batgirl #18, where Klarion formed a tentative alliance with Stephanie Brown as Batgirl – instead of the irredeemably corrupted and nasty figure we’ve seen in recent books like Gotham Academy Yearbook, Klarion here is a sinister, but ultimately heroic figure, giving our heroes the chance to make things right. Little references to these characters’ long histories abound, such as Tweety’s reference to Canary’s signature blonde hair being a wig or dye job, bringing smiles from longtime fans of the martial arts master.

As previously mentioned, Simone makes a few missteps, starting with Catwoman’s preachiness in the beginning scene, clashing with the immediate childishness of Selina screaming Tweety’s signature line about seeing pussycats as Sylvester falls from the magical portal into her arms. The title of the issue, “A Fine Fit of Feather and Fur”, while nicely alliterative, also continues Simone’s habit of overly long and completely unnecessary issue titles. Lastly, while seeing Dinah’s music career return after her inspired (if really uneven and wonky) solo title during DC You is incredibly fun, having the hero/singer try to become…whatever she was trying to become before going back to her indie/punk rock roots was a bit off. Bonus points for referencing Fish Out of Water – one of the best things about Brenden Fletcher’s run of Black Canary was the actual appearance of songs for Dinah’s band.

Now, to the art. There are very few artists who cause me extreme nervousness when I hear they’re attached to a book. Inaki Miranda is one of them. His first work that caught my attention was on Birds of Prey: The Death of Oracle (an already misguided arc in Simone’s second, weaker but still often solid run on the Birds of Prey title). There, Miranda demonstrated a love of complex linework through his unnecessary over-drawing for Huntress’s costume, but combined with colorist Nei Ruffino’s overuse of gradient shifting and 3D rendering effects, Miranda’s work on the faces of the Birds of Prey and their opponents was incredibly crude and unappealing. However, in the seven years since, Miranda’s developed significantly as an artist. After a surprisingly brilliant run on Catwoman (#47-52), Miranda seems to have developed an affinity for the Feline Fatale, returning to draw her as a guest star in the Rebirth Batgirl run (#13), and of course here. Combined with the much more restrained coloring work of Eva De La Cruz, Miranda’s love of complicated lines shows in the hatchwork of the witches in the beginning, and in the wild riot of characters, Simone crams into the story. Sylvester and Tweety, instead of being rendered as humans with cartoony animal characteristics like Bugs Bunny in King and Weeks’ Batman/Elmer Fudd, are instead mostly realistic cat and bird creatures who use the well-remembered speech patterns from the Looney Tunes – a nice compromise. All in all, Miranda’s art is a triumph for the book.

There’s so many details of the book which bring a smile to a reader’s face – the use of the fishnet symbol for Black Canary’s voiceover boxes, and the description of Starfire as “flying tank made of lightning and chainsaws” is pretty classic Simone – poetic and violent. Shea Fontana (DC Super Hero Girls) pens a more traditionally Looney Tunes style backup story with pencils by Walter Carzon. Though not nearly as clever as Simone and Miranda’s main story, it is nice to see a Catwoman appearing very much in the style of Batman: The Animated Series. Italian superstar artist Emanuela Lupacchino’s cover provides a lovely wrapper for this fun presentation, even if it does leave out Black Canary.

Final Thoughts: Though perhaps a bit overstuffed and broad in humor, Gail Simone and Inaki Miranda turn out a really clever, funny, and solidly drawn tale of tribes coming together.