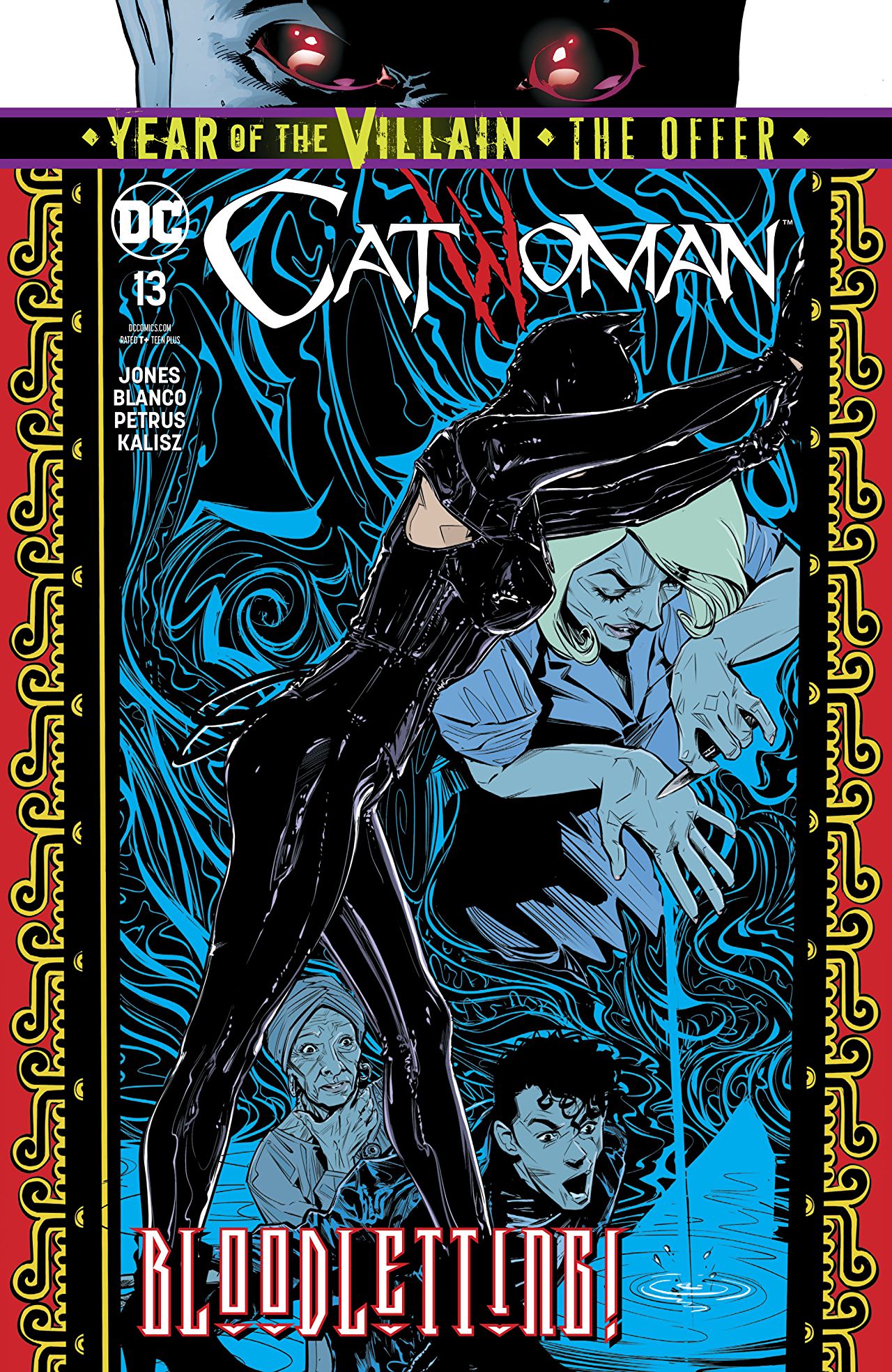 Overview: While Catwoman runs around Villa Hermosa looking for Aunt Linda, Raina Creel is one step ahead and uses her as a bargaining chip to get the relic.

Synopsis (spoilers ahead): The issue starts with a triple timeline. In not-exactly parallel events, we follow Carlos, Selina and Mrs. Creel eldest son, Raymond, who is running for mayor.

It is night and Carlos is in Linda’s shop. Someone knocks repeatedly on the door despite the CLOSED sign. The person refuses to go away even after Carlos tells them to, so he goes to check on the door. It is Detective Yilmaz, who works as Mrs. Creel’s henchman. Yilmaz tries to get Carlos to give him the skull relic in exchange for freeing Linda. He pretends not to know which relic Yilmaz is talking about. The detective reacts poorly, to say the least, kicking the door open and breaking into the store.

Meanwhile, Selina, in her Catwoman costume, is having a heart to heart with James, the art forger. He says he feels as if he’s chasing after her while she runs around in circles and away from him. Her answer to that is, basically leave me alone I don’t want any involvement with anyone. Showing in sporadic panels in parallel is Raymond’s television campaign.

Back in Linda’s shop, Yilmaz is giving Carlos the beating of his life when Mrs. Creel comes out of nowhere, Linda and Dr. Finick in tow. Creel tells him to stop with the violence and let them negotiate, in what is clearly an intimidation strategy. She wants the relic in exchange for Linda.

Carlos gets the relic but before he gets to hand it to Creel some of the blood that is running down his nose falls onto it. The relic is activated for a fraction of a second, showing a hologram of the planet with a number of red dots marked. Just then, Selina comes into the scene. While she busies herself with Yilmaz and Creel, zombie boy fetches a scythe that has fallen to the floor and attacks Selina. Creel manages to escape, taking the relic with her.

In another part of town, possibly another day, Raymond Creel is leaving his office when Dr. Finick intercepts him to inform him that his mother wishes to see him. In his parents’ home, Raymond is, for once, warmly received by his mother. She showers him with pleasantries before slitting his throat, a blood sacrifice to make the relic work.

Analysis: After tripping up for two issues, the Catwoman team seem to have found back it’s footing for the final installment of the second story arc of the title. In its stumbles, not only the art looked like it was done in a hurry, but also the storyline felt for a not-so-brief moment as if it were picking up whatever it could to try to continue moving, gathering a bunch of unnecessary elements, both to the universe Joëlle Jones started building not so long ago and to the six-issue arc itself. Most of those elements were left behind or put back in their place in the previous issue, leaving only the James situation for this final one to deal with. And it did – in a poor, hurried, and questionable way, but it did none-the-less.

This finally reads like something that ties to the main storyline and to Villa Hermosa. Jones likes to play with the timeline a lot, which can make for some confusing reading, but it did work this time, even with three scenes running parallel. Blanco seems to be much more at ease drawing these characters and building the background, with the exception of Raina Creel who still looks like an awkward Barbie Doll. After being passable for a couple of months, Catwoman #13 takes a final leap into a good storyline: surprise elements.

Just as you think the fight scene will go as any other superhero fight scene, there comes an unforeseen element. And you may think Creel might be taking a nicer turn, but she goes crazy as a bat. Mrs. Creel and her zombie boy sidekick continue being the living breath of Catwoman. Funny one of them is living-dead and the other looks like a walking skeleton. Back to James, though. Do you smell that? That is the acrid smell of editorial meddling going wrong. As a character, a charming art-forger with whom Selina would flirt without actually being in a relationship, James could have been a delightful addition to Villa Hermosa. But then I guess there was a bit of a backlash or whatever it is that happened backstage. In this issue Selina breaks up with him – I mean, a serious “never want to see you again” break-up – which makes no sense at all. They never really got anywhere near having anything besides flirting, and there they are, having a conversation that seems as if they are in an on-and-off relationship. It reads as a problem-solution for a problem that never even came to fruition. Final Thoughts: After some knots and mishandlings, the second story arc of Catwoman is wrapped in a bow. A bow that is a bit askew, but a nice looking bow nonetheless.